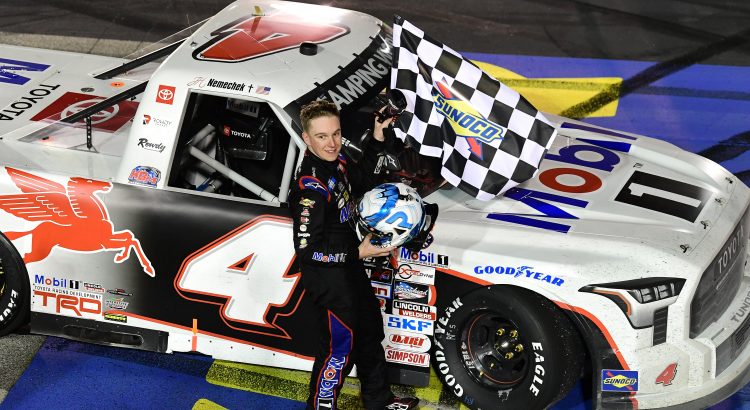 The NASCAR Camping World Truck Series will join the Cup Series at World Wide Technology Raceway (WWT Raceway) this week. While this is the first dance for the Cup cars with the WWT, the Trucks have been racing at this track since 1998. The truckers have put on some good races this year and I expect the same at WWT Raceway. The Toyota 200 can be seen Saturday at 1:30 p.m. ET on FS1.

This is the first race of the Triple Truck Challenge. That means drivers who earn points in the Xfinity and Cup Series are not allowed to compete. The playing field will be more even this week because we will not have the Hendrick Motorsports drivers in the Spire Racing Truck and we will not see Kyle Busch in the Kyle Busch Motorsports Truck.

The race Saturday is scheduled for 160 laps (200-miles). That is a short race, but it is part of a double-header of racing Saturday (The Xfinity Series cars race Saturday evening in Portland), so it had to be a bit shorter for the TV network.

The Truck Series did not get 50 minutes to practice like the Cup Series had. This is not a new track for the Truck Series so they had their normal 20 minute practice session followed by qualifying Friday. It is important to check out the practice speeds because it gives us an idea of what the truckers will have at the start of the race. I am still focusing the picks on what the drivers have done in the previous races this year. 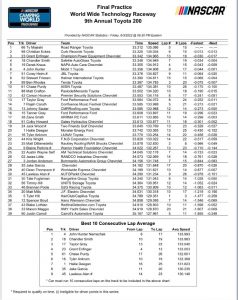 JOHN H. NEMECHEK $11,400: Nemechek is going to be highly owned without any Cup Series or Xfinity Series drivers in the field this week. He has been so consistent that it is tough to fade Nemecheck. He finished 3rd, 6th, 6th, 1st, 3rd, 4th and 2nd in his last 7 races. Nemechek won at WWT Raceway in 2017 and he will have a good chance to win tonight.

BEN RHODES $10,700: Rhodes has not been great over the last month and I am hoping that people focus on what he has done lately and decide to fade him. The No. 99 team has struggled this year on the 1.5-mile tracks. He did not look good at Kansas, Texas or Charlotte. He has looked very good though on the short, flat tracks. Rhodes finished 3rd at WWT Raceway last year. I am hoping to get a lower owned Rhodes Saturday.

CAMERON SMITH $10,400: The Kyle Busch Motorsports trucks have been fast this year and Smith may have the best truck in their garage. Smith won at Phoenix last November and that is the most similar track to WWT Raceway. Smith has finished 5 of his last 6 races in the top-7. The No. 18 truck should be a lock for a top-10 finish Satrday.

STEWART FRIESEN $10,200: Friesen is having one of his best seasons in the Truck Series. He has a 9.5 average finishing position and has average 37.8 DraftKings Points per race. Friesen finished 4th, 5th and 3rd in his last 3 races at WWT Raceway. That’s pretty good.

CARSON HOCEVAR $10,000: I felt so bad for Hocevar last week. He should have won his first race last week but it wasn’t meant to be. I expect Hocevar to bounce back and compete for a win again this week. Hocevar finished 8th at WWT Raceway last year. He should have a great chance for a top-10 finish tonight.

GRANT ENFINGER $9,600: Enginger will have momentum after his 2nd-place finish last week. He is on a hot streak right now. Enfinger finished 6 of the last 7 races in the top-10. He had one of the fastest trucks in practice so I will have Enfinger in many of my lineups Saturday.

COREY HEIM $9,300: Heim will be back behind the wheel of the No. 51 truck for Kyle Busch Motorsports. Heim is driving a limited schedule this year, but he has been good when he has been in the truck. Heim starts on the pole so I will try to get some cheap dominator points out of his Saturday.

JOHNNY SAUTER $8,900: Sauter will be back behind the wheel of the No. 13 truck for ThorSport Racing. Suater drove this truck at Martinsville earlier this year and he was the best pick in DFS contests. Sauter started 36th and finished 2nd; scoring 78 DraftKings Points. Sauter also finished 5th at WWT Raceway last year. I will have a lot of shares of Sauter tonight.

TY MAJEWSKI $8,700: Majewski has been one of the best drivers for ThorSport this season. He has finished 3 of his last 4 races in the top-5. Majewski had the fastest truck in practice. He is going to be highly owned, but Majewski is a great value for $8,700.

MATT DIBENEDETTO $8,300: DiBenedetto got off to a slow start this season but the No. 25 teams is starting to figure things out. DiBenedetto has a 11th-place average finishing position in his last 4 races. I like what I have seen from DiBenedetto lately so I will play him in a few lineups.

DEREK KRAUS $8,100: Kraus is the “free square” this week. He posted the 5th fastest speed in practice but his car did not pass inspection. The No. 19 truck was not allowed to qualify so not Kraus will start in the back Saturday. He is a lock for all Cash Contests and a good pick despite his high ownership in Tournament Contests.

COLBY HOWARD $7,700: Howard has been one of the best value picks over the last month and that will not change tonight. Howard finished 4 of his last 5 races in the top-14. Howard should have a good chance to finish in the top-15 again tonight.

CHASE PURDY $7,300: Who has the second-best average finishing position at WWT Raceway? Yes, it is Chase Purdy. It is a small sample size (one race), but it was a good one. Purdy started 28th and finished 6th in this race last year. I will play Purdy this week and hope he can repeat what he did last year.

JORDAN ANDERSON $6,100: Anderson has been the best value pick in the Truck Series this year. He is always priced around $6K and he always scores 30+ DraftKings Points. Anderson has finished 5 of his last 7 races at WWT Raceway inside the top-10. Anderson should score some place differential points and score well in DraftKings contests tonight.

RAJAJ CARUTH $5,900: Caruth will move up from the ARCA Series to drive the No. 7 truck for Spire Motorsports. This truck has run pretty well this season. William Byron won at Martinsville in this truck, Chase Elliott finished 7th at Bristol and Austin Hill finished 15th at Daytona. Curuth does not have the talent that those drivers have, but the truck should have top-20 speed. Not bad for $5,900. 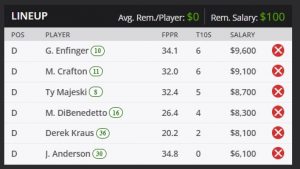 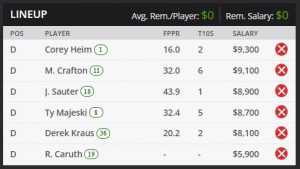