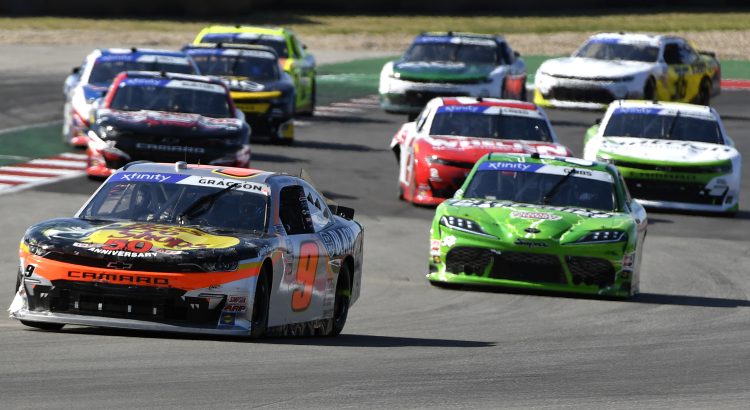 The Xfinity Series will join the Cup Series in competing at a track for the first time. While the Cup Series cars will be just outside St. Louis, the Xfinity Series will travel to the Pacific Northwest to compete at Portland International Raceway. NASCAR last raced at this track in 2000 with the Truck Series. It will be fun to see how the “Series Where Names Are Made” can perform at this road course. The Pacific Office Automation147 can be seen Saturday at 4:30 p.m. ET on FS1.

Portland International Raceway is a new track for the Xfinity Series so that means the teams were given a 50 minute practice session Friday morning and then qualified the cars Friday evening.  It is tough to judge a car’s speed in practice because drivers were sliding all around the track since it was raining. Noah Gragson wrecked his car in practice. It is supposed to rain again Saturday (go figure… It is the Pacific Northwest) so the drivers who were able to control their car in practice should be up front in the race. 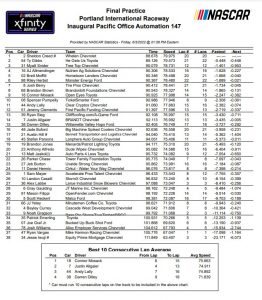 * The final round of qualifying was canceled because it started raining and the teams had the slick tires on the cars. The starting lineup is misleading because the drivers who qualified up front had a dry track to post a faster speed. There is a lot of value starting deeper in the field.

The Xfinity Series has only competed on one road course in 2022 (COTA). I am looking at the driver’s performance on the road courses last year and at COTA this year. This should give us a good idea of which drivers will have a good chance to run up front Saturday. 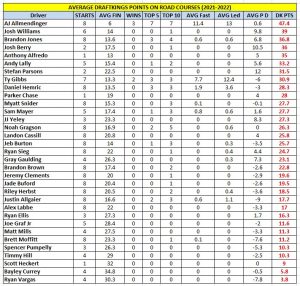 Portland International Raceway is a 1.964-mile road course with 12 turns. The track will be similar Road America and Watkins Glen. There will be some “road course ringers” in the field this week, but the Xfinity Series drivers who have run well on the road courses in the past should be up front Saturday.

TY GIBBS ($10,600): Gibbs had two wins on the road courses last year (Daytona Road Course and Watkins Glen). He should be the biggest threat to AJ Allmendinger Saturday. Gibbs has the aggressive driving style that it takes to finish up front on the road courses. I will have some shares of Gibbs this week.

AJ ALLMENDINGER ($10,500): So how dominant has Allmendinger been on the road courses in the Xfinity Series. He finished 1st, 1st, 2nd, 2nd, 4th, 1st and 2nd in his last seven road course races (1.8 average finishing position). It is hard to get any better than that. Allmendinger led almost twice as many laps as any driver in the field at COTA on his way to Victory Lane in March. He is my pick to win Saturday. * Allmendinger said after qualifying that his team will work on their car and he will start from the back. He will be scored from the 10th position. I do not care will he starts, I will play Allmeninger in 70% of my Tournament Contest lineups.

NOAH GRAGSON ($10,300): Gragson has been the best driver in the Xfinity Series this year and he should run up front Saturday. Gragson finished his last five road course races in the top 10. He started 12th and finished 4th at COTA in March. He wrecked in practice but his Junior Motorsports team should get his car fixed up for the race.

JUSTIN ALLGAIER ($10,100): Allgaier is a high-risk, high-reward driver for your Tournament Contest lineup Saturday. He either finishes in the top-10 or he crashes out of the races on the road courses. I like the speed that Junior Motorsports has this year so I will have some shares of Allgaier but I do not trust him as much as other people do.

SAM MAYER ($9,800): The driver who has impressed me the most in the Xfinity Series this year has been Mayer. I knew he had some talent but I did not expect this young driver to finish seven of his last eight races in the top-five. Mayer finished 5th at COTA in March so I will use Mayer in my lineups and hope the hot streak continues in Portland.

BRANDON JONES ($9,400): “Checker or wreckers” is the philosophy that Jones lives by. He is a good pick for Tournament Contests because he has so much upside. It is hard to trust Jones in Cash Contests because the floor is so low. I will have a few shares of Jones this week. I also like playing him in Joe Gibbs Racing stack.

DANIEL HEMRIC ($9,000): What should we do with Hemric this week? He had a lot of success on the road courses last year while driving for Joe Gibbs Racing, but Hemric looked like trash at COTA in his Kaulig Racing Chevy. Hemric started 19th and finished 25th in March at COTA. He has the talent to run up front and the 50 minute practice session should allow AJ Allmendinger to help Hemric with his car. I will ignore what happened at COTA and play Hemric in a few lineups Saturday.

SHELDON CREED ($8,600): Everyone is going to have AJ Allmendinger and/or Ty Gibbs in their lineups, but the sleeper pick who could steal the show Saturday evening is Creed. He posted the fastest speed in practice and he qualified 7th. Creed is a great value pick this week who could score some dominator points.

ANDY LALLY ($8,100): Lally will be behind the wheel of the No. 44 car for Alpha Prime Racing. There is no doubt that Lally is one of the best road course drivers in the field. The question is… will his car make it to the finish line? He finished 10th, 13th, 5th and 18th in his last four road courses races. I will play Lally and hope his car can avoid mechanical issues.

ANTHONY ALFREDO ($7,900): I take a helping of “Fast Pasta” this week. He does not have a lot of road course experience but his results have been decent. Alfredo has only competed in one road course race in the Xfinity Series over the last year. He started 18th and finished 13th at COTA in March. Alfredo should be able to finish in the top-15 Saturday.

ALEX LABBE ($7,700): How many Canadians will there be at the track cheering on their native Canadian this week? Labbe has a road course background and he usually runs in the top-10 at these tracks. Finishing the races has been the problem. Labbe finished 36th, 14th, 13th, 39th and 11th in his last five road course races. He is either going to finish in the top-15 or crash out of the race. I will take a chance with Labbe based on his talent on road courses.

MYATT SNIDER ($7,600): Snider finally has some momentum after his 10th-place finish at Charlotte last week. Now he gets to race at a road course. Snider has been one of the better road course drivers in the Xfinity Series. He finished his last three road course races in the top-10. He started 21st and finished 6th at COTA in March. Snider will be an excellent play if he can do that again.

JADE BUFORD ($7,300): Jade Bufford will be back behind the wheel of the No. 48 car for Big Machine Racing. This is the car Tyler Reddick took to Victory Lane and Austin Dillon drove last week at Charlotte. Bufford is back in the car because he has a lot of experience on the road courses. Bufford started 16th and finished 8th at COTA in March. He will be one of the best value picks in the field if he can do that again Saturday.

JEBB BURTON ($7,100): Burton had a lot of success on the road courses while racing for Kaulig Racing. His average finishing position on the road courses last year was 12.7. He started 20th and finished 23rd in his Our Motorsports Chevy at COTA in March. Burton has the upside to finish in the top-12 so I will have some shares of the No. 23 car Saturday.

PARKER CHASE ($6,600): Chase will be behind the wheel of the No. 26 car for Sam Hunt Racing. Chase is a “road course ringer” who has had some success in the Xfinity Series. He started 23rd and finished 19th at COTA in March. I will have a few shares of Chase Saturday and hope he can finish in the top-15.

JOSH WILLIAMS ($4,700): Williams the best value plays this week. He has averaged the second-most DraftKings Points on the road courses over the last year. That is because he is averaging nearly 10 place differential points per race. Williams finished 11th, 15th, 14th, 17th, 10th and 17th (14th-place average finishing position) in his last six road course races. I will take a chance with Williams this week. 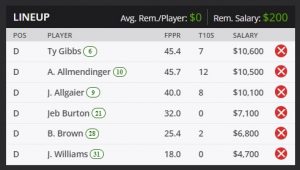 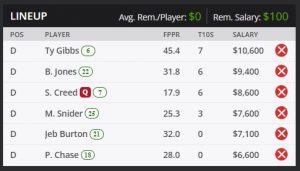