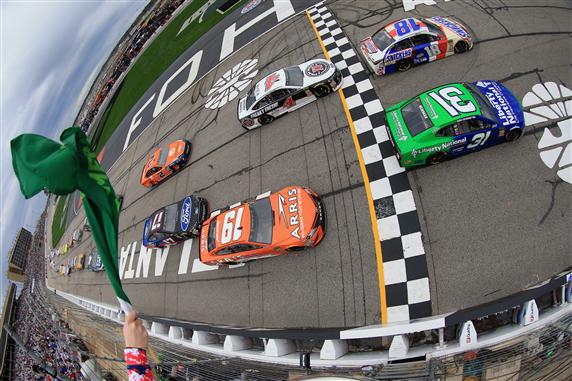 The Monster Energy NASCAR Cup Series travels to Atlanta Motor Speedway this week for the Folds of Honor Quick Trip 500. This will be the first race for the series using the new aerodynamics package. We can expect slower speeds and closer racing. Tires will be the story at Atlanta. The drivers who can manage their Goodyear’s the best will be up front Sunday.

The MENCS will be back to a normal schedule this week. The first practice is scheduled for Friday at 11:30 a.m. ET. (I do not see any TV coverage for practice so I imagine it is on the Fox Sports App) Qualifying is Friday evening at 5 p.m. ET (FS1). The final practice is Saturday at 12 p.m. ET (FS1). I will post my Garage Talk Notes after final practice. The race is Sunday at 1 p.m. ET on Fox.

The Driver Group Game will be back to awarding bonus points for qualifying. The default settings awards 10 points for the pole winner, 5 points for 2nd, 3 points for 3rd, 2 points for 4th and 1 point for 5th. Keep that in mind when making your picks this week.

Kyle Busch won the pole for the 2018 Folds of Honor Quick Trip 500. His lead did not last long. Kevin Harvick managed his tires perfectly by running against the apron. The No. 4 car took the lead on lap 20 and won Stage 1. The No. 2 team used pit strategy to get Brad Keselowski the lead and he dominated Stage 2. Harvick took the lead back in the final Stage and took the checkered-flag to win his first race at Atlanta since his rookie season (2001). Harvick led 181 laps in this race. He has led the most laps (1,016) in six of the last 7 races at AMS and only has one win to show for it.

Kevin Harvick (8): Harvick has been a beast at Atlanta. Since joining Stewart-Haas Racing in 2014, Harvick has an average starting position of 2.5, has led an average of 183-laps per race and has a 7.4 average finishing position at Atlanta. He is the best in the business at managing his tires and running the yellow line at the bottom of the track. We only get 8 allocations with Harvick and I am not afraid to use one at AMS.

Brad Keselowski (8): Keselowski is the only driver who has been able to compete with Kevin Harvick in the last two seasons at Atlanta. Keselowski has qualified 1st and 2nd in his last two races at the track. He has also led 59 laps and finished 1st and 2nd in the two races. While Harvick wins with tire management, the No. 2 team is the best at using pit strategy to gain track position and manage their tires in the pits. He is the 2nd best pick in Group A this week.

Kurt Busch (8): Atlanta is one of the best tracks for Busch. He has been to Victory Lane three times at AMS. Busch has not finished outside the top 8 at Atlanta since 2014. He has had a top-5 running position in the last 2 races at the track so he is good at scoring Stage points. It will be interesting to see how the switch to Chip Ganassi Racing affects Busch in 2019. Kyle Larson is the third-best driver in the field at this track so I do not expect Busch to slow down this week.

Aric Almirola (8): I am sticking with the Stewart-Haas Racing team for my Group B picks. It really helps to have the No. 4 car to bounce information off of after practice. Almirola ran well in his first race with SHR at Atlanta. He qualified 11th and finished 13th. The results are misleading. Almirola had the 10th-best average running position so his car was actually better than his results. I also like Almirola because out of all of the Group B drivers, Almirola has the best average finishing position on the 1.5-mile tracks since the beginning of the playoffs last year. I do not plan to use him but he is a good backup to have.

Denny Hamlin (8): I thought about using Jimmie Johnson in this position. Johnson has a series-high 5 wins at Atlanta (he won in 2016 and 2015) but I need to see him perform on the track first. I will play it safe and use the Daytona 500 winner, Denny Hamlin. He won at Atlanta in 2012 and he nearly won the race last year. I expect a bounce-back season from Hamlin and Johnson so this pick comes down to who I trust more. I trust Joe Gibbs Racing over Hendrick Motorsports right now.

Daniel Hemric (8): Hemric has never competed in a MENCS race at Atlanta but he is still the best pick in Group C. Hemric has two races in the Xfinity Series at Atlanta on his resume. He finished 9th and 11th and qualified 6th in both. Hemric is a smooth driver. He knows how to take care of his tires. That should serve him well this week.

Matt DiBenedetto (8): Do not look at the previous stats for DeBenedetto at Atlanta. They suck. This pick is all about potential. Many people have said DiBenedetto would break out if he ever had a seat in a good car. The No. 95 looked really good at Daytona. Crew Chief Mike Wheeler almost won this race for Denny Hamlin by managing the team’s use of their tires. DiBenedetto will likely be the best choice in Group C this year. We need to manage our allocations with him carefully, but I want to have him in my lineup as an insurance policy this week.