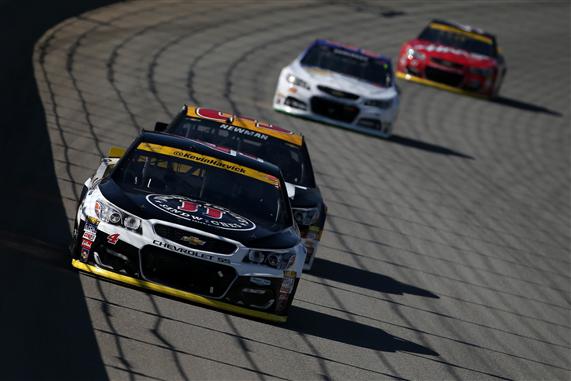 The Monster Energy NASCAR Cup Series will compete at Chicagoland Speedway this week for the Overton’s 400. This will be the sixth race this season on a 1.5-mile track so we should have a good idea which drivers will be the best for our team this week. The race can be seen Sunday at 2 p.m. ET on NBC Sports Network.

The MENCS will have another unique schedule this week. There is no on track activity for the MENCS Friday. There will be two practices Saturday, followed by qualifying Saturday evening. Our Driver Group Game rosters must be set by 8am ET Saturday.

The last race at had four dominators. That is rare on a 1.5-mile track. Usually we have two main dominators on the intermediate tracks. Kyle Busch won the pole and led the most laps (85). Kevin Harvick took the lead from Busch at the beginning of Stage 2. Harvick led 59 laps and finished 3rd. Busch multiple penalties in the pits and finished 15th. Chase Elliott beat Harvick off pit road and led 42 laps. Elliott won Stage 2 and finished 2nd. Martin Truex Jr. overcame a penalty and ran down Harvick with 77 laps to go in the race. Truex led the last 77 laps and won his second consecutive race at Chicagoland Speedway.

The race at Chicago was moved from September to July this season. One of the reasons for the change was because NASCAR felt the track was “lacking character.” It is a pretty easy track for the top teams to navigate. Ryan Newman said, “I consider Chicago to be much like Michigan. The surface is smooth and a lot of fun to race on. To win at this track you need a good car with consistent balance. If you are off when you unload it is really hard to get the speed back.” Usually the drivers who perform well in practice are the ones dominating the race at Chicago.

There are only three choices for Group A this week. Kevin Harvick, Kyle Busch and Martin Truex Jr. have dominated the 1.5-mile tracks for over a year now and it is not going to change this weekend. Now we need to decide which one to leave off our team and it is not an easy decision. Harvick has been the most dominant driver this season so he automatically gets the spot. Busch vs. Truex Jr. is tough. Busch has won the pole for the last 2 races at Chicago so he is the best bet to score bonus points for qualifying. Truex has won the last 2 races at Chicago and that is hard to ignore. Since the race was moved from September to July and the track conditions will be a lot different, I am going with the two drivers who have won all 5 races on the 1.5-mile tracks this season (Harvick and Busch).

Kevin Harvick (4): Harvick is a threat to win every week and he is my pick to visit Victory Lane Sunday. Harvick has won 3 of the 5 races on the 1.5-mile tracks this season and led a series-high 561 laps. The No. 4 car has also qualified in the top 3 in 3 of the 5 intermediate track races. Harvick should qualify up front, lead the most laps and win the race this week.

Kyle Busch (5): It was tough picking Busch over Martin Truex Jr. but when you watch the race at Chicago last year you will see that Busch had the car to beat. He won the pole, led the most laps and had 2 huge penalties in the pits. Both times he went to the back and raced his way to the front. Busch has won 2 races on the 1.5-mile tracks this season (Texas and Charlotte) and in the last race he led 377 of the 400 laps. That is domination! I expect Busch to win the pole, lead most of the laps in Stage 1 and finish in the top 3 Saturday night.

There is no need to try and be cute this week. The cream rises to the top at the 1.5-mile tracks so I am simply going with the drivers who have had the most speed at the intermediate sized tracks.

Clint Bowyer (4): To say Bowyer is having a career year is an understatement. His second season at Stewart-Haas Racing has been a huge success. The No. 14 team is starting to find their groove after a win at Michigan and a 3rd-place finish at Sonoma. Ryan Newman said this track races like Michigan and if that is the case, Bowyer should be the best pick in Group B. His stats at Chicago are nothing to write home about, but he has never had a car as fast as what he will have this weekend.

Kurt Busch (3): Busch has been pretty consistent on the 1.5-mile tracks this season. He has finished 4 of the 5 races in the top 8. He also won the pole at Texas so he should have a good chance to score your team bonus points for qualifying. The Stewart-Haas Racing cars have a lot of speed. It is not a bad idea to use as many of them as possible this week. I went with Busch over Aric Almirola because I need to make up points after the disaster at Sonoma. Busch is the safer pick this week so he gets the spot.

Ryan Blaney (3): Blaney’s middle name must be “Speed”. There is no doubt that the No. 12 car will be fast this weekend. Blaney has scored bonus points for qualifying in 3 of the 5 races on 1.5-mile tracks this season. He has been hit or miss in the races though. Blaney has a pair of top-five finishes (Las Vegas and Fort Worth) and a pair of 35+ finishes (He crashed at Kansas and the engine blew at Charlotte). Blaney has a 7th-place average finishing position at Chicago so I will roll the dice with him this week.

Chase Elliott (6): Hendrick Motorsports is starting to find more speed in their cars. Some of their success came when they switched to a new engine before the race at Charlotte. Elliott finished in the top 12 in the last 3 races on the 1.5-mile tracks. Chicago ranks as his best track so you would think he could finish in the top 10 and maybe the top 5 this week. In his two races at Chicago Elliott has finished 2nd and 3rd. I really hope I can use an allocation with the No. 9 car this week.

Alex Bowman (4): Bowman is the top pick in Group C this week. He has not had a lot of success on the 1.5-mile tracks this season but he was able to finish 9th in the last race at Charlotte. I think the Hendrick Motorsports cars were just lacking some horsepower and they found it with their new engine. Bowman filled in the Dale Earnhardt Jr. at Chicago last year. He qualified 17th and finished 10th. Bowman should be good enough for a top 12 finish Sunday.

Darrell Wallace Jr. (9): I thought about using William Byron as my 2nd driver in Group C but Byron has a 25th-place average finishing position on the 1.5-mile tracks. I also only have 4 allocations with him, so Wallace Jr. gets the spot. Bubba has a 20th-place average finishing position in the 1.5-mile tracks and he ran well in the last race at Charlotte I still have all 9 allocations left with Wallace so I hope I can burn one this week.

I will post my final picks for Driver Group Game after final qualifying Saturday.