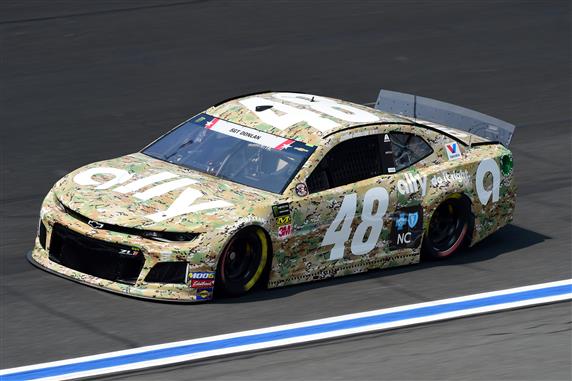 It is sure good to have NASCAR back. Yes, we had some interruptions for rain at Darlington but at least we had some racing. Hopefully the weather cooperates a little better this weekend so we can get the races in. The Coca-Cola 600 can be seen at 6 p.m. ET on Fox.

The race at Charlotte is one of the few events where the field is set by qualification. Qualifying for the Coca-Cola 600 is set for 2 p.m. ET on FS1. Remember, we get bonus points for drivers who qualify in the top five. We need to factor these points into our picks this week. My starting lineup will be posted after qualifying is completed Sunday (roughly 3 p.m. ET).

Martin Truex Jr.: The best track for Martin Truex Jr. is by far Charlotte Motor Speedway. He has finished 1st, 2nd, 1st, 3rd, 13th, 1st, 3rd and 5th in his last eight races at Charlotte (3.6 average finishing position). He has also led 963 laps in the last eight races (120 laps per race). Truex is one of the best in races that go from day –to-night. The No. 19 car is almost a lock for a top-five finish Sunday.

Chase Elliott: Well, Chase Elliott should be fired up for Sunday’s race. He will not be looking to pay back Kyle Busch in this race. He will seek revenge on the No. 18 car at Bristol or Martinsville. Elliott will be focused on winning Sunday and his No. 9 Chevy will be fast enough to get the job done. Elliott finished 4th in this race last year and Hendrick Motorsports was having a down year at that time. Now that they have the fastest cars in the field, Elliott should have a good chance to go to Victory Lane in the Coca-Cola 600.

Alex Bowman: The No. 88 car is just too fast to ignore right now. I think the drivers who ran well at Las Vegas will run well at Charlotte. Alex Bowman finished 13th at Las Vegas but he was running 2nd with six laps left when the caution came out and everyone else behind him got fresh tires while the No. 88 car stayed out. Bowman finished 7th and 9th in his last two Coca-Cola 600 races. I expect Bowman to battle for a top-five finish Sunday.

Jimmie Johnson: Is he back? Jimmie Johnson is not back to being the dominant driver he once was but he is as close as he has been in a long time. The No. 48 car has a lot of speed right now and if they can get the handling a little better, Johnson will be in Victory Lane. Charlotte Motor Speedway is one of Johnson’s best tracks. He has eight wins at the track. I will take Johnson in any endurance race.

William Byron: I will complete the group of Hendrick Motorsports drivers with William Byron. The Cup Series will be back to qualifying this week and Byron won the pole for this race last year. It was just one of five poles Byron won in 2019. I am using Byron to score the bonus points for the pole but he should also be good at his home track. Byron finished 9th and scored 11 Stage points in this race last year.

Ryan Blaney: Ryan Blaney did not look too good in Darlington but I am not worried about it. Blaney is at his best at the 1.5-mile cookie cutter tracks. Blaney had one of the most dominant cars at Las Vegas and it should be fast Sunday. Blaney had the 2nd-best Driver rating and 2nd best Average Running Position in Sin City. Blaney was running 6th in the Coca-Cola 600 last year with four laps to go, but his track-bar broke. The No. 12 car will be up front Sunday.

Matt Kenseth: Matt Kenseth had a tough race Wednesday at Darlington. I do not expect the same to happen Sunday. Charlotte Motor Speedway is much easier to keep the car off the wall than the Track Too Tough to Tame. Kenseth has been really good at Charlotte when he has a decent car. Kenseth had a 6th-place average finishing position in his last four races at Charlotte with Joe Gibbs Racing. I think he can have similar results for Chip Ganassi Racing.

Tyler Reddick: Can we all agree that Tyler Reddick is the best of the “Big Three?” Cole Custer and Christopher Bell received all of the hype but Reddick has all of the trophies. He won back-to-back Xfinity Championships and he is clearly the best rookie this season. Reddick had a 5.7 average finishing position in the Xfinity Series at Charlotte. He should run in the top 15 this week.

* If Matt Kenseth is a Group B option in your league, you can use Ty Dillon as a replacement.

* My starting lineup for the  Driver Group Game will be posted Sunday after qualifying.