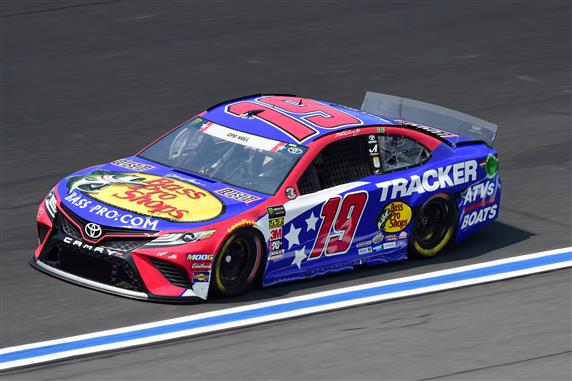 The NASCAR Cup Series will return home this week for two races at Charlotte Motor Speedway. The first race is Sunday at 6 p.m. ET on Fox. This is an endurance race and it requires the drivers to be mentally strong, the crew chiefs to be able to make a lot a difficult decisions and the pit crews need to be flawless for 14 pit stops. It should be a fun race to watch.

The cars will qualify for the Coca-Cola 600 and that means we must select our driver to win the pole before 2 p.m. ET. My pick to win the pole is Alex Bowman. I originally had William Byron as my pick but he goes out 4th in qualifying. Bowman goes out 29th and he will have plenty of time to study the data from other drivers before he qualifies.

Martin Truex Jr.: Martin Truex Jr. should be in all lineups Sunday. He has absolutely dominated the races at Charlotte Motor Speedway. He has finished 1st, 2nd, 1st and 3rd in his last four races on the oval. He has also averaged 110 laps led in these races. I expect Truex to run in the top-10, score a lot of Stage points and find his way to Victory Lane Sunday night.

Kyle Busch: Kyle Busch has not had the speed to dominate the races this year like he has in the past, but he does find his way to the front when the checkered flag is waived. The Coca-Cola 600 typically has a lot of long runs and the Joe Gibbs Racing cars have the best long-run speed. Busch has finished 1st and 3rd in his last two Coca-Cola 600 races. He also has led 456 laps in these two races and scored 36 Stage points. I would be surprised if Busch does not finish in the top five.

Joey Logano: If I am right and the drivers who ran well at Las Vegas will be the drivers running upfront at Charlotte; Joey Logano should be an excellent pick. He won the race in Sin City and he finished 2nd in the Coca-Cola 600 last year. Logano has a 7th place average finishing position in the six races this season. I expect the No. 22 car to run in the top 10, score a lot of Stage points and finish in the top five.

Chase Elliott: The No. 9 car is not lacking speed this year. They are lacking a little luck but that can change at any time. Chase Elliott will be more than motivated to win the Coca-Cola 600 after he was dumped at Darlington. Elliott had one of the fastest cars at Las Vegas and he finished 4th in this race last year. If Martin Truex Jr. does not win the race Sunday, it should be the No. 9 car in Victory Lane.

Alex Bowman: The No. 88 car is just too fast to ignore right now. I think the drivers who ran well at Las Vegas will run well at Charlotte. Alex Bowman finished 13th at Las Vegas but he was running 2nd with six laps left when the caution came out and everyone else behind him got fresh tires while the No. 88 car stayed out. Bowman finished 7th and 9th in his last two Coca-Cola 600 races. I expect Bowman to battle for a top-five finish Sunday.

Jimmie Johnson: Is he back? Jimmie Johnson is not back to being the dominant driver he once was but he is as close as he has been in a long time. The No. 48 car has a lot of speed right now and if they can get the handling a little better, Johnson will be in Victory Lane. Charlotte Motor Speedway is one of Johnson’s best tracks. I will use the No. 48 car as my Insurance Policy Sunday.

Other Drivers I will be looking at during qualifying include: Kevin Harvick, Brad Keselowski, Ryan Blaney and Denny Hamlin. If any of these drivers qualify in the top five, I may put them into my lineup.