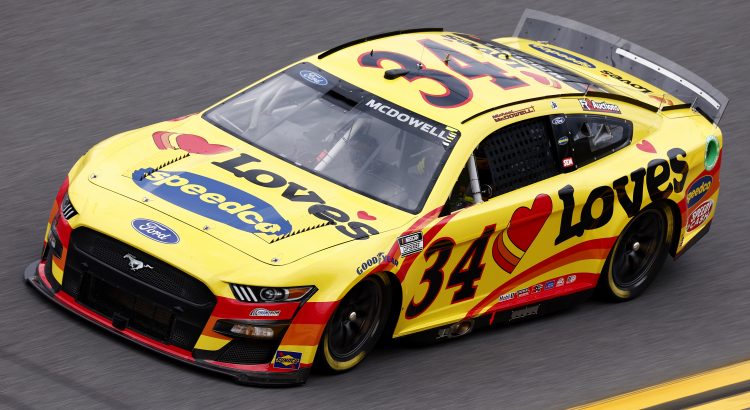 The 2022 Fantasy NASCAR season will take the green flag in the 64th running of the Great American Race Sunday. After a lot of hard work in the offseason, the Driver Group Game is back and better than ever. NASCAR is bringing back qualifying this season so that means our teams’ will score bonus points if our drivers qualify in the top five (There are no qualifying points for the Daytona 500 since the field is set through the Duel Races, but just remember that you need drivers who start up front in the other races). Also new this year is the Truck Series Driver Group Game. I will be posting my pick for the Truck Series as well as the Cup Series this year. It is going to be a fun season and I cannot wait to get it started…

It is going to be a full week of racing at Daytona. Here is the schedule for the week…

The Daytona 500 is a tough race to predict but there is some data we can use to make it easier. I looked at the driver’s history at the track, how many Driver Group Points he averages at Daytona, how many Stage Points he averages and how many times he has finished the race without crashing. We want drivers who run up front and score a lot of Stage Points. Once a drive earns these points, they cannot be taken away. So even if they crash at the end of the race, the driver will have some Stage Points in the bank to help him score well in the Driver Group Game. Here is the chart I used to make my picks this week… 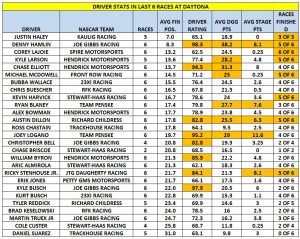 The picks below are the drivers I am considering for the Daytona 500. The driver’s starting position does not matter much in this race so I do not expect these picks to change much, but I still want to see what happens in Speedweeks. Be sure to check back Saturday evening after the Xfinity Series race to see my final picks for the Daytona 500.

Denny Hamlin (9): There are some people who think they need to save their allocations with Hamlin. Group A is so deep with talent that there is no need to save allocations. If you run out of starts with Hamlin you will be forced to use Kyle Larson, Chase Elliott, Martin Truex Jr., Joey Logano, Ryan Blaney or Kevin Harvick in the other races. Not that big of a deal. Hamlin is by far the best choice Sunday. He has three Daytona 500 trophies and has won three of the last six Daytona 500s, scored the second-most Stage Points and the most Driver Group Game points. I plan to roll with Hamlin Sunday.

Ryan Blaney (9): Chase Elliott has the second-best stats behind Denny Hamlin, but I will save Elliott for the road courses. I may pull the trigger and use Blaney as a pivot to Hamlin. Blaney won the last race at Daytona and he finished second in the Daytona 500 in 2020 and 2017. Blaney also has two wins at Talladega. He is quickly becoming the second-best Superspeedway driver in the Cup Series (behind Denny Hamlin). I will watch the Duels and if Blaney looks as good as I think he will, I will use him in the Daytona 500.

* Joey Logano is good at Daytona but his allocations are too valuable at the other tracks to be used at a Superspeedways. I recommend saving Logano for the more predictable races.

Austin Dillon (9): Are there any safe picks in the Daytona 500? Dillon has a history of finishing races at Daytona and that is as important as any stat. The 2018 Daytona 500 Champion has finished on the lead lap in eight of his last nine Daytona 500 races. That is either incredibly lucky or he knows what he is doing at this track. Dillon has also averaged the second-most Driver Group Game points in Group B (behind Joey Logano) at Daytona and he has averaged the third-most Stage Points. There is no reason to fade Dillon in the Daytona 500.

Aric Almirola (9): I thought about using Bubba Wallace in this spot, but the word from the garage is that this car is difficult to drive. I want a driver who has experience behind the wheel and for that reason I will have Almirola in my lineup. He used to be one of the best drivers at Daytona when the cars were difficult to drive. He should be good again Sunday.

Ricky Stenhouse Jr. (9): Stenhouse is tough to trust, but he is good at Daytona. He always goes to the front early in the race and this allows Stenhouse to score a lot of Stage Points. These points make Stenhouse a safer pick because he will have Stage Points to fall back on if he crashes out of the race. Stenhouse parked his car early in the second practice because he said it was good and had everything he needed.

Chris Buescher (9): Buescher was not very good at Daytona last year but he was really good in the previous races. Buescher finished five of the seven races in the top-10 at Daytona between 2017 and the 2020 season. Using drivers who we may not use much this season is a good strategy at Daytona. Buescher has a lot of upside and I do not plan to use him nine times in 2022.

Michael McDowell (9): You almost have to take a chance with the 2021 Daytona 500 Champion and see if he can do it again. McDowell will be one of the highest owned drivers in your league, so if he crashes it will not hurt you much. McDowell has been awesome in the Daytona 500. He last six finishes in the Daytona 500 are 1st, 14th, 5th, 9th, 15th and 15th. I will take that kind of production Sunday.

Justin Haley (9): Remember how good Haley was in the Busch Light Clash at the Coliseum race? Haley should be even better Sunday. He has three races in the Cup Series at this track and his finishes are 1st, 13th and 6th. His win and sixth-place finish were in Spire Motorsports cars. Now we get to see what he can do in a Kaulig Racing Chevy. His car should have a lot more speed than what he had in previous seasons.