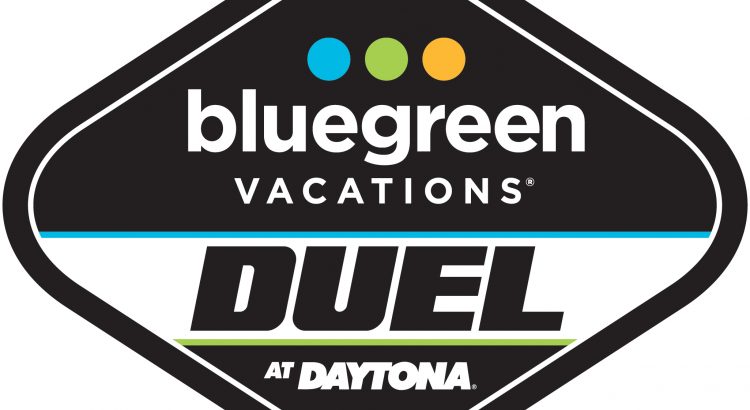 The NASCAR Cup Series has a unique way of setting the field for the Daytona 500. There will be two qualifying races Thursday night called the Bluegreen Vacations Duel Races. Each race is 150 miles in length and the driver’s finishing position in the race will dictate where he will start in the Daytona 500.

The trend in the Duel Races is for one race to be calm and the other will have a lot of wrecks. That probably will not happen tonight. Almost every driver at Media Day said the same thing… “The most important thing is to bring the car home in one piece so we will have it for the race Sunday.” The teams do not have a lot of cars so they cannot afford to wreck tonight. Most teams did not ever bring a backup car to the track.

Denny Hamlin said, “I am not worried about my starting position. I will try to get to the front, but if I get stuck in traffic, I will not put myself in danger of wrecking my car. I have won the Daytona 500 from the back before.”

Martin Truex Jr. said, “My team told me that this is not only our Daytona 500 car, but they want to use it next week at Fontana. I have to keep this car in one piece.”

Joey Logano said, “I do not plan to get too aggressive in the Duel Race. I just want to get through the race clean. Starting position in the Daytona 500 is not that important.” It sounds like the Duel Races are going to be a game of “follow the leader” tonight.

Kyle Larson and Alex Bowman will start from the front row in the Daytona 500 as long as they do not wreck their cars. I do not expect Larson or Bowman to race very long tonight. Hendrick Motorsports did not bring any backup cars to the track. They cannot afford their cars to be wreck, so Larson and Bowman will likely drop out of the race. They are a fade for me tonight.

Noah Gragson and Jacques Villeneuve are locked into the Daytona 500 on Speed. These two teams do not have a lot of funding and they could be in big trouble if they wreck tonight. I would be shocked if Gragson or Villeneuve race tonight. These two drivers are a fade for me too.

The strategy for Superspeedways races is to pick drivers who start and hope they score a lot of place differential points. That will NOT be my strategy tonight. I expect the drivers to stay in line for the majority of the Duel Races. My strategy will be to pick drivers who can finish in the top-10, regardless of their starting position. All of the drivers will have a lot of ownership since there are only 21 cars in each race. We need to find the drivers with the lowest ownership with the best chance to score well.

One of the strategies that has worked out well for me in past in the Duel Races is to stack drivers from the same team in my lineups. The drivers usually find their teammates and follow them around the track. The driver who wins the Duel Race will likely have his teammate pushing him to the win. The way qualifying played out makes these races perfect for stacking.

Hendrick Motorsports Stack: The Hendrick Motorsports drivers will start No. 1 (Kyle Larson), No. 2 (William Byron) and No. 3 (Chase Elliott) in Duel Race 1. It is almost a guaranteed that the Hendrick Motorsports cars will line up and dominate the entire race. They also have four Chevy’s starting right behind them (Ross Chastain, Danuel Suarez, Daniel Hemric and Tyler Reddick). I plan to have a lot of shares of Byron and Elliott because there is a good chance they finish No. 1 and No. 2 in the race. I will fade Larson since he has nothing to race for.

Joe Gibbs Racing Stack: All of the Joe Gibbs Racing cars qualified for Duel Race 2. I expect Martin Truex, Denny Hamlin, Kyle Busch, Christopher Bell and Bubba Wallace to lineup up and go to the front early in Duel 2. They will likely dominate the race and all finish in the top 10. I will play a Toyota Stack tonight with Denny Hamlin, Martin Truex Jr., Kyle Busch, Christopher Bell and Bubba Wallace. I will pair them with David Ragan from the back.

Chase Elliott ($9,900) will start right behind his teammate (Kyle Larson) tonight. It is risky to start drivers from the front two rows because they need to finish in the top-five and score dominator points. Elliott should do both. Elliott hasn’t led a lap in the last three Duel Races but that is because he started on the front row and was locked into the race. Elliott started 5th in 2018. He led 34 laps, scored 4 fastest laps and won the race. He could have a similar race tonight.

William Byron ($9,700) will have a good chance to win Duel 1 tonight. He will start on the front row in Duel 1. I expect Kyle Larson to either let Byron take the early lead or Chase Elliott to let Byron into the lower lane so the three Hendrick Motorsports cars can lineup and dominate the race. Byron started fourth and won his Duel Race in 2020. He will have a good chance to do it again tonight.

Brad Keselowski ($8,700) is the one driver I heard yesterday at Media Day talk about racing in the Duel Race. Keselowski was asked if he is going to take it easy in the Duel since he is now the owner and the funds for new cars will come out of his pocket. Keselowski said, “We came down here to races. Our goal was to win practice, win the Duel Race and win the Daytona 500. We expect to take some damaged cars back to Concord, North Carolina, so we are going to do whatever it takes to win.” I like Keselowski from the 9th starting position.

Cole Custer ($7,200) has not had a lot of success on the Superspeedways and I doubt he will win tonight. I do think Custer will team up with Ryan Blaney, Brad Keselowski,, Austin Cidric and Chase Briscoe and try to make his way to the front. Custer is one of the best picks from the back tonight.

Todd Gilliland ($5,800) may get overlooked tonight and that could be a mistake. Gilliland may be a rookie but he has talent. I would have liked Gilliland more if his teammate (Michael McDowell) was in this Duel Race to work with him, but I expect Gilliland to work with the Fords to get to the front.

Kaz Grala ($5,600) has to race his way into the Daytona 500 so you know he will have the pedal to the floor tonight. Grala has a history of showing up at the Cup Series races and surprising people. He finished 7th in the Daytona Road Course Race and 6th at Talladega last year. I will have Grala in all of my Cash Contest lineups.

Kevin Harvick ($9,800) is “Mr. Duel Race”. He has either led the most laps and led the second-most laps in the last three Duel Races at Daytona. He starts 13th but he said during Media Day, “My car does not have the speed that others have, but it is one of the best driving cars in the field.” The show could be over if Harvick can get to the front.

Joey Logano ($9,500) cannot be faded in a Superspeedway race, but he will be highly owned. For that reason I like Logano more for Cash Contests. I will play Logano as part as a Ford Stack with Kevin Harvick, Joey Logano, Aric Almirola, Michael McDowell and David Ragan.

Dillon Brothers (Austin Dillon $8,100 and Ty Dillon $6,400) will be my contrarian picks for Duel 2. I expect everyone to either load up with the Joe Gibbs Racing cars or stack the Fords. The Dillon’s are both good Superspeedway drivers. I expect the brothers to work together and try to find their way to the top-10. I will pair them with Corey LaJoie ($5,900) since his team has an alliance with Richard Childress Racing.

The Old Goats (Greg Biffle $6,100 and David Ragan $5,200) have to race their way into the Daytona 500 so they will be doing all they can to get to the front. We all know they have the talent to move through the field, but do their cars have the speed? I will take a chance with Biffle and Ragan from the back. 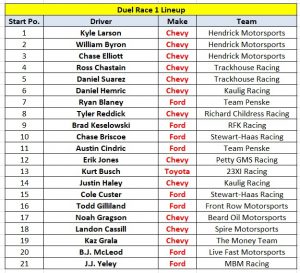 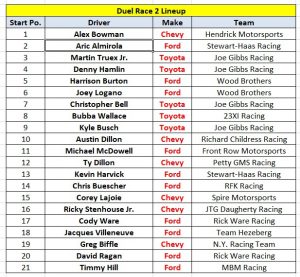 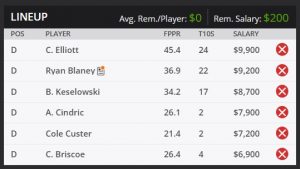 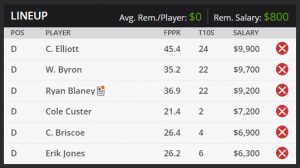 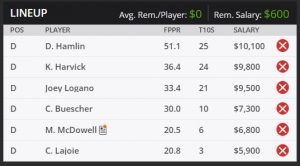 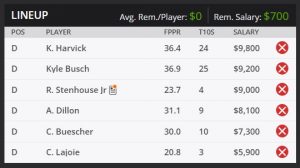 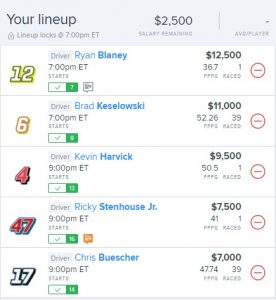 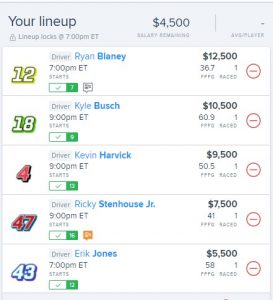