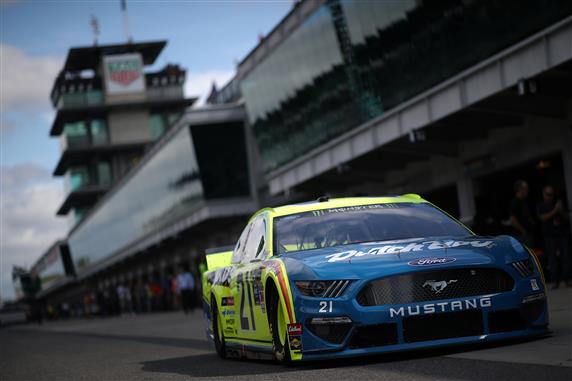 Were two races at Pocono enough for you? If you did not like the racing at the Tricky Triangle, you probably will not be thrilled about what you are about to see at the Brickyard. Indianapolis Motor Speedway is another huge, flat track with little passing. Hopefully the excitement of having the Xfinity Series on the road course, the IndyCars at the track and Dale Jr. in the TV booth will add to the excitement on this 4th of July weekend. The Big Machine Hand Sanitzer 400 can be seen Sunday at 4 p.m. ET on NBC.

The cream always rises to the top at Indianapolis because the Cup Series teams bring their best cars to this race. The Brickyard is a “Crown Jewel” race and each team desperately wants the trophy. I expect the drivers who dominated at Pocono to dominate the race Sunday.

Here are my picks for the Big Machine Hand Sanitizer 400 …

(Start) Denny Hamlin: Denny Hamlin is having a career season and he is the most consistent driver in the sport in 2020. Hamlin has a series-high 4 wins, and a 2nd-place average finishing position in the last 4 races. That is red hot. Hamlin has finished 5 of his last 6 races at Indianapolis in the top 6. Hamlin also has the No. 1 pit stall at one of the toughest pit stalls in NASCAR. I am only starting Hamlin over Kevin Harvick because I have 6 allocations left with Hamlin and only 4 with Harvick. If you have 5 or more with Harvick, use the No. 4 car.

(Bench) Kevin Harvick: I hate only having 4 allocations left with Kevin Harvick because I have 6 races I want to use him in. I am only sitting Harvick on the bench because of allocations. Last year Harvick led 118 of the 160 laps and won this race by 6.18 seconds. Harvick had the best car at Pocono and he will be the fastest Sunday. Since joining Stewart-Haas Racing in 2014, Harvick has finished 1st, 4th, 6th, 6th, 3rd and 8th at Indianapolis (4th place average finishing position).

(Start) Aric Almirola: Denny Hamlin has been the best driver in the sport over the last 4 races but do you know who No. 2 is? Aric Almirola. The No. 10 car finished 5th (Homestead), 3rd (Talladega), 3rd (Pocono) and 5th (Pocono). Almirola’s speed from Pocono should translate into speed Sunday. Last year he was top 5 in all of the practices at Indianapolis and a light stand fell on his car before the race. His team tried to fix the damage. Almirola was still able to finish 14th after starting the race in a hole. He should be a lot better this week.

(Start) Clint Bowyer: I have often been told not to put all of my eggs in one basket, but I am all in on Stewart-Haas Racing this week. The Tricky Triangle was a Joe Gibbs Racing track and Indianapolis is SHR’s best track. Smoke puts a lot of work into his cars for this race. Last year Clint Bowyer finished 5th in both races at the Brickyard. His 118.1 Driver Rating is second only to Kevin Harvick. Bowyer finished 7th and 8th in the two races at Pocono. I’m not worried about his starting position.

(Bench) William Byron: If you do not want to go all in on Stewart-Haas Racing, William Byron is a great choice. One of the best performances I have ever seen from and Xfinity Series driver happened at Indianapolis. In 2017 Byron outraced Kyle Busch, Joey Logano, Erik Jones and Paul Menard to win the race. His success in the Xfinity has translated into good runs at this track in the Cup Series. Byron finished 4th at the Brickyard last year. He should have a good chance for a top-10 finish Sunday.

(Bench) Erik Jones: Erik Jones should be very good Sunday but I am saving him for some other tracks. Jones had one of the fastest cars at Pocono. He ran both races in the top 5 but got tangled up with Tyler Reddick on Saturday. That is the story with Jones. If he stays out of trouble he finishes in the top 7, but there is always a risk of crash with him. That is what happened last year at the Brickyard. Jones had one of the fastest cars. He was running 6th when he got spun out by Brad Keselowski on lap 49 and ruined his race. Jones is a “high risk, high reward” driver Sunday.

(Allocation Special) Ryan Newman: If you want to save an allocation and use a driver you will not use all 8 allocations with this season, Ryan Newman is your driver. Indianapolis ranks as his 2nd-best track behind New Hampshire. Newman has finished 8th, 10th, 3rd, 31st (Engine), 11th, 11th, 1st, 7th and 12th in his last 9 races at the track. That is a 10th-place average finishing position in his last 9 trips to the Brickyard (7th-place average finish if you take away his engine failure in 2016).

(Start) Matt Kenseth: Could this be Matt Kenseth week? The No. 42 car finished 2nd in both stages and was leading the race last year at the Brickyard when Kyle Larson was spun out. Is Kenseth that far behind Larson that he cannot have somewhat similar results? Kesneth has finished 5th, 4th, 7th, 2nd, 5th and 12th in his last 6 races at the Brickyard. He also just finished 11th and 12th at Pocono. I am going to gamble and say this is a Kenseth week in the Driver Group Game.

(Bench) Christopher Bell: If Matt Kenseth is not an option for your team, Christopher Bell is really good too. I was really impressed with the No. 95 car at Pocono. Bell finished 4th on Saturday and he was running in the top 5 on Sunday when he had a wheel go down and smacked the wall. Bell is starting to get the feel of the Cup Series cars. I would not be surprised if Bell finished in the top-10 this week.

(Allocation Special) Bubba Wallace: If you want to save an allocation with your top drivers this week, strap Bubba Wallace into your lineup. He had one of the best races of his career at Indianapolis last year. Wallace qualified 15th and had a 11.7 average running position. His team used pit strategy and a fast car to finish 3rd. Wallace had a 15th-place average finishing position in his last 7 races this season so he is running pretty well.