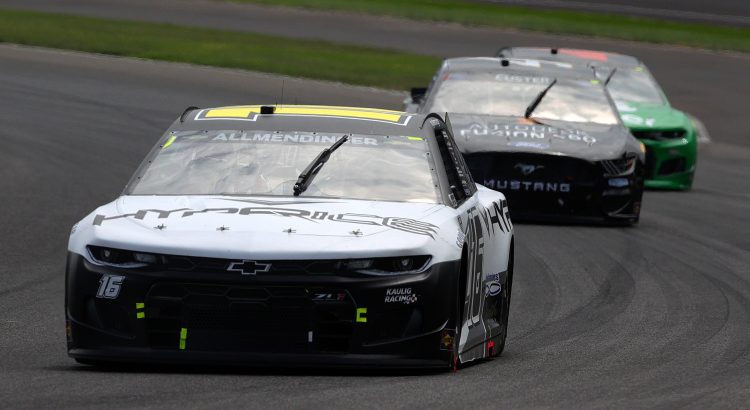 The NASCAR Cup Series will once again compete on the road course at Indianapolis Motor Speedway. NASCAR made the switch from the famous large track to the road course because the racing was considered boring by most spectators. If they wanted to spice things up, they got it last year. The race on the road course last year was scheduled for 82 laps but it took 95 laps to complete because there were so many cautions at the end of the race. Will the race Sunday be calmer? There is no chance in hell of that happening. The Gen-7 car has created a lot of chaos. I expect the same in the race Sunday.

It will be interesting to see what NASCAR does this week with the curbing on the Indianapolis Road Course that tore up so many cars last year. Even if they do make changes to the track setup, we can still expect a lot of spinouts.

My strategy this week is to simply select the drivers who have been the best on the road courses this season (COTA, Sonoma and Road America). I will also look at the drivers who were good at Indianapolis last year. I know the Gen-7 car drives completely different, but I still expect the drivers who ran up front in 2021 to be good picks this week.

Here are the picks for the Verizon 200…

CHASE ELLIOTT (5): Elliott must be in all lineups this week. Not only is he the best driver on the road courses, he is scorching hot right now. Elliott finishes 1st, 2nd, 1st, 2nd and 1st in his last four races. I know his win last week was from the two cars who finished ahead of him being DQ’d, but it was still a third-place finish. Elliott finished 4th (COTA), 8th (Sonoma) and 2nd (Road America) on the road courses this year. He also finished 4th at Indy last year. Elliott is my pick to win Sunday.

KYLE LARSON (4): I had a tough time with the driver I want to pair with Chase Elliott Sunday. It came down to Ryan Blaney and Kyle Larson. Blaney has been better on the road courses this year (The No. 12 car finished 6th, 6th and 11th in the three races). Kyle Larson finished 3rd, 15th and 29th in his three races. Both drivers had awesome races at Indy last year. Blaney finished 2nd and Larson led 28 laps and finished 3rd. I know I am starting Elliott in the race so I need a driver for qualifying points. Larson has scored bonus points for qualifying in 7 of his last 9 races on the road courses so he gets the spot in the lineup.

ROSS CHASTAIN (3): I really want to get through the race Sunday without having to use an allocation with Chastain. He has been good at every type of track this year so I would rather save my allocation with the No. 1 car for the oval tracks. I will have Chastain on my team for qualifying points and if he smokes the field in practice Saturday, I will use him in the race. He won the race at COTA, finished 7th at Sonoma and 4th at Road America. If he doesn’t get spun out by one of his friends, Chastain will be a lock for another top-10 finish. He also won the pole at COTA and qualified 4th a Road America so he will be a good pick for qualifying bonus points too.

CHASE BRISCOE (5): NASCAR drivers always get more confidence when they race at their home tracks. That is the case for Briscoe too. The Hoosier native had a great chance to win the race at Indy last year but he was penalized for taking a short-cut while leading the race. Briscoe also won the Xfinity Series road course race at Indy in 2020. This is one of his best tracks so I will have Briscoe in my lineup this week.

TYLER REDDICK (6): Reddick broke his maiden in the Cup Series when he went to Victory Lane at Road America. Reddick also finished 5th at COTA so he has been pretty good on the road courses this season. Reddick won both Stages and led 6 laps at Indy last year but he was spun out and finished 21st. Reddick will have a good chance to finish in the top-five Sunday.

CHRIS BUESCHER (8): I need to save allocations with my top drivers so I would love to be able to use an allocation with Buescher Sunday. He finished 2nd at Sonoma and 6th at Road America so Buescher has been good on the road courses this season. He also finished 12th at Indy last year. The No. 17 car is starting to show some improvement so I will take a chance with Buescher at Indy.

AJ ALLMENDINGER (7): I need to save allocations with my top drivers in Group C so I will be starting Allmendinger this week. He won the race on the Indianapolis Road Course last year and he should have a good chance to win Sunday. I know Allmendinger has had problems on the road courses this year, but he has too much talent to pass up. If his car can hold together, Allmendinger is going to be tough to beat.

Daniel Suarez (3): Austin Cindric is probably the better pick for Group C, but I am not using this pick for a driver I want to use in the race. I know I will be starting AJ Allmendinger so I need a driver who can score bonus points for qualifying. Suarez qualified 5th and scored bonus points in the Driver Group Game at Indy last year. The No. 99 car should have a lot of speed again this weekend. Suarez will be a good pick for the race if Aliens kidnap Allmendinger and force me to use My Amigo in the race. He won the race at Sonoma and finished 5th at Road America. I would not be surprised if Suarez finished in the top-five again Sunday.

* Kyle Busch Motorsports has the fastest trucks tonight. I would love to pair Chandler Smith and Corey Heim with John H. Nemechek, but I only have one allocation with them. I will take my chances with Grant Enfenger who was fastest in practice and Johnny Sauter who is only racing a limited schedule.