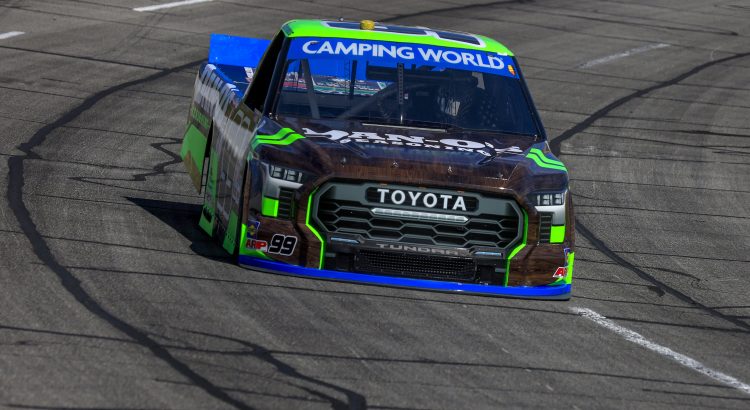 The green flag to start the NASCAR Camping World Truck Series playoffs will be waived Friday night. The truckers will begin their race for the championship by doing something they have not done in a long time. The Truck Series will compete at Indianapolis Raceway Park (IRP). The last time NASCAR went trucking at this track was in 2011. That race was won by Timothy Peters. It will be fun to see which driver can be the next to win at IRS and possible secure their spot in the next round of the playoffs. The TSport 200 can be seen Friday at 9 p.m. ET on FS1.

The Truck Series was given some extra practice time since IRP is a new track for the series. The teams had 50 minutes to dial in their trucks Friday morning before they qualified Friday evening. 80% of my decision on who to use this week is based on practice speed and qualifying. I will also look at the driver’s momentum heading into the playoffs.

Here are the practice speeds for Friday’s Truck Series race… 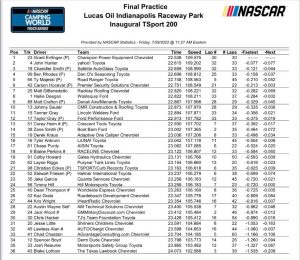 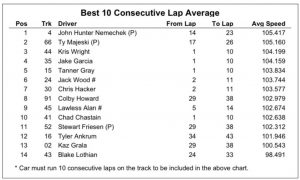 The cream usually rises to the top in the NASCAR playoffs and that means the 10 drivers competing for the championship should get some extra attention when you are filling out your lineups this week. If I have a decision between two drivers, I want the one who has more to race for. The 10 drivers competing for the 2022 Camping World Truck Series Championship include: Zane Smith, John H. Nemechek, Chandler Smith, Ben Rhodes, Stewart Friesen, Christian Eckes, Ty Majewski, Carson Hocevar, Grant Enfinger and Matt Crafton. 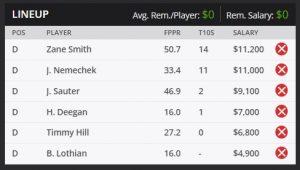 ZANE SMITH ($11,200): What happened to Smith? He has been the best driver in the Truck Series this year but he sucked last week and he does not look very good at IRS. Smith posted the 14th fastest lap in practice and he qualified 23rd for the race. The No. 38 team should get Smith fixed up and he should score 10+ place differential points tonight.

JOHN H. NEMECHEK ($11,000): Nemechek hasn’t been as good this year as he has been in the past, but now it is playoff time and it is time for the “Real Nemechek” to show up. The No. 4 truck posted the second-fastest speed in practice with the fastest long-run speed. Nemechek should have a good chance to win tonight.

JOHNNY SAUTER ($9,100): Sauter has not competed in the Truck Series for a while, but he has been good when he has been behind the wheel of the No. 13 Truck. Sauter finished fifth and second in his last two races. He has speed again. Sauter posted the 10th-fastest speed in practice. He should score some place differential points from his 15th starting position.

HAILIE DEEGAN ($7,000): I usually do not play Deegan but I will take a chance with her tonight. Deegan has competed in two ARCA Series races at IRP and she finished in the top-five in both races. She posted the eighth-fastest speed in practice and she starts 17th. I expect Deegan to finish in the top-15 tonight.

TIMMY HILL ($6,800): Hill looked decent in practice. He posted the 24th fastest speed and then he got loose in qualifying. Hill will start 35th so he is a great pick to score place differential points tonight. His average finishing position in the Truck Series this year is 21st. Hill will score 35 DK Points if he can just have his average finish.

BLAKE LOTHIAN ($4,900): I do not expect much from Lothian tonight, but he does not need to do much to return value at $4.9K. Lothian starts dead last so he cannot lose points. Lothian is guaranteed six points, but I expect he will score 10+ once truckers start to fall out of the race. 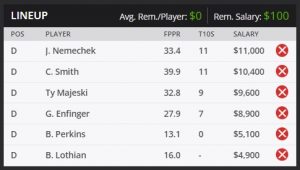 JOHN H. NEMECHEK ($11,000): I am playing Nemechek in the Cash and Tournament Contest lineup tonight. I know there is some risk in using Nemechek since he starts on the front row and he cannot score place differential points, but Nemechek should be the top dominator in the race. I am all in with the No. 4 truck tonight.

CAMERON SMITH ($10,400): Most of the field does not have any experience at IRP. That is not the case for Smith. He has two wins at IRP in the ARCA Menards Series. Smith was third-fastest in practice today. I usually do not play two trucks from the front row, but Kyle Busch Motorsports has the speed tonight. The No. 18 truck has a great chance to win at IRS.

TY MAJEWSKI ($9,600): How will Majewski perform in the playoffs? This is his first time competing for the championship. Majewski is off to a good start. He posted the fifth-fastest speed in practice and qualified sixth for the race. Majewski is a good value pick for $9.6K.

GRANT ENFINGER ($8,900): Enfinger has been in a slump lately. So has the No. 23 team for GMS Racing been trying different setups for the playoffs? I am not sure, but I know they showed up with some speed this week. Enfinger posted the fastest speed in practice and qualified fifth for the race. Enfinger has finished eighth in all of the short-track races this season. He should finish eighth or better tonight.

BLAKE LOTHIAN ($4,900): Lothian is no risk and all upside tonight since he cannot score negative points. I will have him in the Cash and Tournament Contest lineup and hope he can move up a few spots in the race.