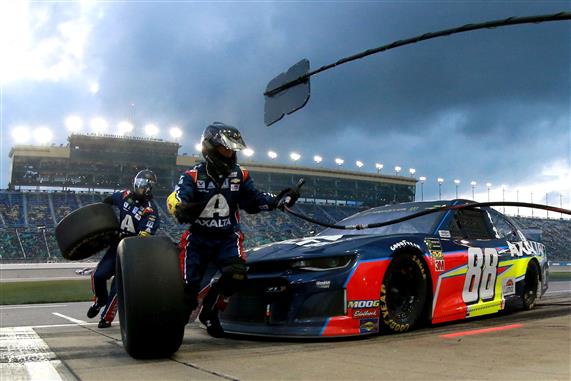 The cars will have the 550 HP engines with the 2” splitter, 8” spoiler and aero ducts this week. It is the same package used at all of the 1.5-mile tracks this season. The track that is most similar to Kansas Speedway is Las Vegas Motor Speedway. We can use the South Point 400 Results to help predict the race Sunday since that was a playoff race and teams showed what they had for the championship that week.

Failed inspection forced a lot of drivers to start in the back in the last race at Kansas. Chase Elliott, Joey Logano, Jimmie Johnson and Daniel Saurez all started in the back and quickly made their way through the field. Kevin Harvick won the pole, won Stage 1, finished 2nd in Stage 2, led a race-high 104 laps and finished 13th. Alex Bowman and Chase Elliott also had good races. Elliott won Stage 2, led 45 laps and finished 4th. Bowman led 63 laps, scored 6 Stage points and finished second. Brad Keselowski made a run to the front with 20 laps left in the race. The No. 2 car chased down the No. 88 and went to Victory Lane for the second time at Kansas.

Kevin Harvick (2): Harvick is my pick to win Sunday. He dominated the last race at Kansas. Harvick won the pole, scored 19 Stage points and led a race-high 104 laps. You want to know how good Harvick is at Kansas? He has scored 74 Stage points and led 296 laps in the last 4 races at Kansas. Harvick just finished 2nd in the last 1.5-mile track in the playoffs (Las Vegas). This is a great race to use one of your last allocations with the No. 4 car.

Chase Elliott (5): Elliott most likely needs to win the race Sunday in order to advance in the playoffs. He could get it done. The No. 9 car was one of the fastest in the May race at Kansas. Elliott failed inspection so he started in the back. It was not an issue for him though. Elliott drove all the way to the front and finished 2nd in Stage 1 and won Stage 2. Elliott finished the race in 4th place and he finished the last race on a 1.5-mile track at Las Vegas in 4th place too. I expect Elliott to have a great chance to win the pole, score a lot of Stage points and finish in the top 3 Sunday.

Alex Bowman (4): Bowman has been at his best on the 1.5-mile tracks this season. He finished 2nd at Kansas in May (He also led 68 laps in the race) and he won at Chicagoland Speedway. Bowman finished 6th at Las Vegas last month so the No. 88 team has not lost any of the speed they had in the first half of the season at the 1.5-mile tracks. No one expected the No. 88 team to make it into the Round of 8 but he could do that if he repeats his performance from the May race at Kansas.

Erik Jones (1): Jones has been really good at Kansas recently. He finished 4th and 7th in the 2 races at the track last year and 3rd in the May race in the Heartland this season. When Jones can avoid mechanical failure, he usually finishes in the top 8 on the 1.5-mile tracks this season. Jones does not have any pressure on him since he is eliminated from the playoffs. I expect the No. 20 car to finish in the top 10 Sunday.

Kurt Busch (1): Will Kurt be using this race as a test to help his teammate (Kyle Larson) for the race at Texas or will he be out to win the race? I expect Busch to use some of the practice time to test setups for Texas but on Sunday the team will be running their own race. I have Busch penciled into my lineup right now since he is so good at this track. If he does not look fast in practice, I will swap him out in my final lineup Friday night.

Jimmie Johnson (2): Johnson has been decent on the 1.5-mile tracks this season. He finished 5 of the last 6 races on tracks of this size in the top 11. Johnson qualified 12th and finished 6th at Kansas in May and he finished 11th at Las Vegas last month. It does not look like there has been any quit in the No. 48 team. I expect Johnson to have another top-10 run this week.

Chris Buescher (1): Buescher has been one of the biggest surprises this year on the 1.5-mile tracks. He usually qualifies outside the top 20 and finishes inside the top 15. Buescher qualified 18th and finished 10th at Kansas in May. Buescher has finished half of the races this season on the 1.5-mile tracks in the top 10. I am running low on allocations with Buescher but I have been saving them for the intermediate tracks so I will use my last allocation Sunday.

Ty Dillon (3): Dillon has not been very good on the large ovals this season. He has a 22.6 average starting position and a 25.4 average finishing position in the 8 races on the 1.5-mile tracks this season. The No. 13 team received some extra funding to use the wind-tunnel to help get their car dialed in before they take it to the track. This has helped them run in the top 20. Dillon finished 16th last month at Las Vegas and he should have a good chance to finish in the top 20 Sunday.