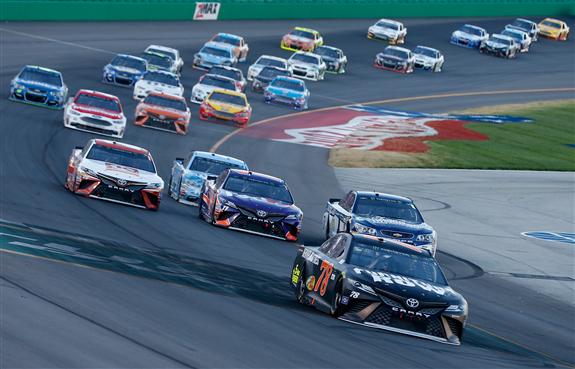 The Monster Energy NASCAR Cup Series will compete at Kentucky Speedway this week in the Quaker State 400. This will be the seventh race of the season on a 1.5-mile track. The same drivers who have been dominating the previous six intermediate track races should be up front this week.  The race can be seen Saturday night at 7:30 p.m. ET on NBC Sports Network.

The MENCS will have another unique schedule this week. They will squeeze two practices and qualifying into one day. The first practice will be at noon Friday, followed by final practice at 2 pm ET. Qualifying will be at 6:40 pm ET and our Driver Group Game picks must be submitted by 8 am ET Friday.

The last race at Kentucky was dominated by two drivers. Kyle Busch won the pole and led 112 laps. He was trying to become the first driver ever to win an Xfinity Series and MENCS race on the same day. Martin Truex Jr. took the lead from Busch with 27 laps left in Stage 2. The No. 78 ran away from the field and won his third race of the season.

Kentucky Speedway was repaved in 2016. They added banking to turns 1 and 2 but they left turns 3 and 4 alone. The track is not as bumpy as it once was but the narrow entrance to turn 3 makes this is a tricky tack to navigate. The cars that unload with a lot of speed Friday should be able to carry that speed into the race Saturday night.

Here are my picks for Kentucky…

I sure wish we could roster three drivers in Group A. We could simply select Kevin Harvick, Martin Truex Jr. and Kyle Busch and know we will have the pole winner and the race winner in our lineup. The chances of one of these three drivers winning the race Saturday night are very high. They have won the last 12 races on the 1.5-mile tracks. Harvick will be the driver I will leave out this week. He has a great chance to win but I am down to three allocations with the No. 4 car. I like the No. 18 and No. 78 a little more than the No. 4 car this week, but any of these three drivers would be a great selection for your team.

Kyle Busch (5): Busch is my pick to win Saturday night. He has won the last two races on the 1.5-mile tracks (Charlotte and Chicago) and he has two wins at Kentucky on his resume (2011 and 2015). Busch has a series-best 5.14 average finishing position in his seven races at the track. His worst ever finish at Kentucky is 12th. Busch will also be a good pick to score bonus points for the pole. He has won the pole in two races on the 1.5-mile tracks this season and he won the pole at Kentucky last year. Busch led 112 laps in the last race at Kentucky and he could do it again Saturday night.

Martin Truex Jr. (7): Truex enters the race Saturday night as the defending race winner and he has more momentum than any other driver in the sport. Truex has an average finishing position of 4.2 in the last seven races. That includes two trips to Victory Lane and three finishes in second-place. The No. 78 team has recaptured their 2017 form and Truex will be a serious threat to win the race Saturday night.

Erik Jones (7): Jones will enter the race Saturday night with a lot of momentum. People often say, “The hardest race to win in NASCAR is your first race.” Jones has the talent to win multiple races and maybe getting to Victory Lane for the first time will give him the extra boost he needs to finish up front each week. Jones has only competed in one MENCS race at Kentucky and he finished sixth. He also has three finishes in the top five at Kentucky in the Xfinity Series. Jones has an average finishing position of 9.2 on the 1.5-mile tracks this season. He is one of the safest picks in Group B this week.

Kurt Busch (3): I will pair Erik Jones with three Stewart-Haas Racing drivers. SHR has been dominant on the 1.5-mile tracks and I will continue to use them until the other teams catch up or I run out of allocations. Busch has finished 4 of the 6 races on the 1.5-mile tracks in the top eight. He has been hit or miss at Kentucky in his seven races at the track, but as well as the No. 41 team has been running this season you would have to think Busch will be a hit Saturday night.

Clint Bowyer (3): I am not going to focus on past results at Kentucky for Bowyer. He never had cars as fast as what he has been driving this season. Bowyer has been fighting Kyle Larson for the driver who will join the Big Three (Kevin Harvick, Kyle Busch and Martin Truex Jr.) in Homestead. Bowyer has a 10.3 average finishing position on the 1.5-mile tracks this season. I really like him because the No. 14 car keeps getting better each week. If any driver beats the Big Three to Victory Lane this week it should be Bowyer.

Aric Almirola (7): I have been holding off using Almirola at the 1.5-mile tracks. It is hard to overlook what he has done in the past but he is a new driver with a new team. Almirola has finished 4 of the 6 races and the 1.5-mile tracks in the top 13. His average running position in the last four 1.5-mile track races is 8th, so he just needs to finish as well as he runs and Almirola will have a lot more value in Fantasy NASCAR.

Alex Bowman (4): Bowman is the class of the field when it comes to Group C drivers. I was really hoping one of the other drivers would step up but so far it has not happened. Bowman is 15th in the NASCAR Point Standings so I expect the No. 88 team to “points race.” This means they will play it safe with their strategy to ensure they finish in the top 15. Bowman may not finish in the top five this week but he is almost a lock for a top 15 finish Saturday night.

Darrell Wallace Jr. (8): My final driver in Group C came down to William Byron, Chris Buescher and Wallace Jr. Each of the drivers has similar stats on the 1.5-mile tracks this season. I went with Wallace because I have twice as many allocations with him as I have with Byron (4) and I trust Wallace a little more than Buescher. Wallace drove the No. 43 car for Aric Almirola at Kentucky last year. He qualified 17th and finished 11th. I would gladly take an 11th-place finish from Bubba Saturday night.

I will post my final picks for Driver Group Game after final qualifying Friday.