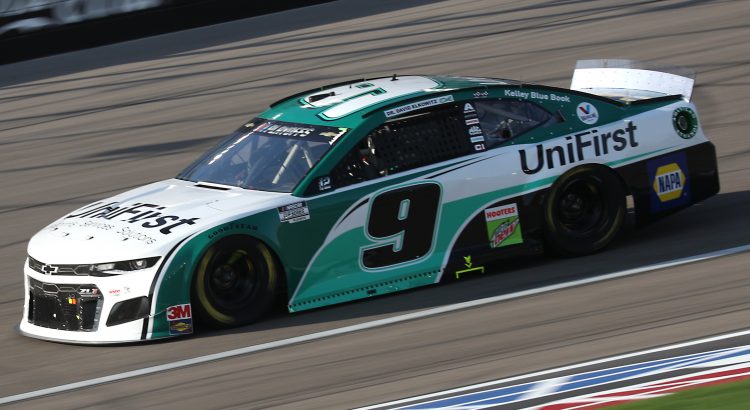 Do you like parity? That is what we have in 2021 in the Cup Series. Predicting the races this season has not been easy. I have been wrong as much as a meteorologist, but I made some phone calls to talk to people in the garage to see what the is going on. I also analyzed the races by crunching the numbers and re-watching the races (sometimes the eyeball test is better than looking at the numbers). Usually I make my picks based on track history and stats. This week I am putting a major emphasis on momentum. We will see how that plays out.

Las Vegas Motor Speedway is a high-speed intermediate track that wears-out tires fast. It is not quite as extreme as what we had last week at Homestead, but it is close. The track has three distinct grooves with a lot of bumps. The track is difficult because turns 1 and 2 are typically in the sun and turns 3 and 4 are in the shade. That means 3 and 4 will have a lot more grip. The drivers who can hang onto their car in turns 1 and 2 are the drivers who will run up front Sunday.

Here are my picks for the Pennzoil 400…

Group A Pick Kevin Harvick: NASCAR threw me a curveball last week and sent Denny Hamlin to the back of the field. This left me scrambling and I decided to use an un-planned allocation with Kevin Harvick. I looked at the races this year and I will be OK with using another allocation with the No. 4 car Sunday. Harvick has been really good with the 550 aero package in the first races at Las Vegas. He has a 4.3 average finishing position, averaged 17 Stage points (fantastic!) and averaged 131 laps led in the first race in Sin City. Does it get any better than that? You can use the No. 4 car with confidence Sunday.

Other Good Pick include Joey Logano: Before the season I matched the drivers with their best races. I had Joey Logano penciled in as my Group A driver for the Pennzoil 400. Logano won the last two early races at Las Vegas and his average finishing position in the current aero package in Sun City is 6th. Logano is averaging 13 Stage points and 53 laps led per race when the Cup Series makes their first appearance of the season at Las Vegas. The numbers suggest you should use Logano Sunday, but his performance at Homestead was pathetic. I will save Logano until he gets some momentum.

Allocation Saver Ryan Blaney: Ryan Blaney is in a similar situation as his teammate Joey Logano. All of the stats suggest Blaney will be an excellent pick Sunday but do you really trust the No. 12 team after finishes of 30th, 15th and 29th to start the season? Blaney scored the most Stage points, led the second-most laps and had the second-best average finishing position on intermediate tracks last year so there is some upside with him. I prefer using Blaney in DFS this week, but if you want to gamble in Las Vegas, Blaney is your guy.

Group B Kyle Larson: Using an allocation with Kyle Larson paid off at Homestead and he should score well again Sunday. Larson may not be the Ace of Spades in Las Vegas, but he is a King of Hearts. Larson has a 5.6 average finishing position in the current aero package at Las Vegas. This is another track where running up against the wall and searching the track for grip will be important. I also like his fast pit crew this week. I have no problem using another allocation with the No. 5 car Sunday.

Group B Alex Bowman: You almost have to play “The Showman” in Las Vegas. I really like what I have seen from Hendrick Motorsports at the intermediate tracks in the playoffs last year and what they did last week at Homestead (had three cars finish in the top 10). Alex Bowman has finished 8th, 5th, 3rd, 5th and 9th in his last five races on the 1.5-mile tracks. One of my crew chief friends told me the track most similar to Las Vegas is Chicagoland Speedway. Bowman is the master at Chicagoland so he should be good Sunday.

Other Good Picks: Kurt Busch won the race at Las Vegas last year. It was surprising that Kurt Busch was 0-22 at his home track, but he finally found Victory Lane last year. He said that one of the reasons he was able to win was because he did not have to spend so much time entertaining family and friends at the track and he could simply focus on racing. There will be some fans at the track Sunday, but Busch should still have time to concentrate on getting the No. 1 car to the front and not worry about where to take Aunt Betty out for dinner. If you do not feel comfortable with two Hendrick Motorsports cars in your lineup, Busch will be a good pivot.

Allocation Save: Matt DiBenedetto was awesome at Las Vegas last year. He started both races from the 19th position and finished both races in the 2nd position. I had Matt DiBenedetto penciled in as one of my Group B drivers this week but he has been horrible this season. He has finished 33rd, 37th and 28th in the three races in 2021. That is too much bad voodoo for me to mess with. The stats suggest DiBenedetto should run up front, so if you are feeling lucky, take a chance with the Italian Stallion.

Group C Michael McDowell: I never thought we would be able to use the driver leading the NASCAR Playoff Standings in Group C, but here we are. Michael McDowell has been running too well to ignore this year. He won the Daytona 500, finished 8th at the Daytona Road Course and 6th last week at Homestead. McDowell has sucked at Las Vegas though. His average finishing position in Sin City is 33rd. His average finishing at Homestead was 28th and he finished 6th so maybe the stats don’t matter this year with McDowell since he has better equipment to work with. I am ignoring the stats and going with what I’ve seen on the track. Hopefully momentum will be on McDowell’s side again Sunday.