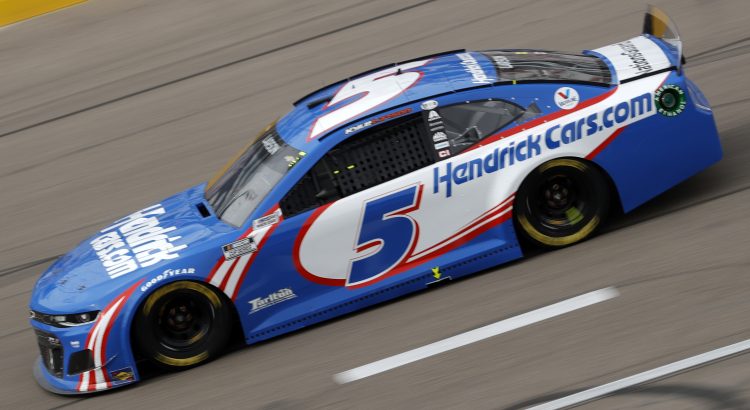 The first round of the NASCAR Cup Series Playoffs is complete. Now it is time to take the green flag for the Round of 12 at Las Vegas Motor Speedway. The Cup Series last competed in Sin City in early March. You would think that a lot has changed in seven months, but that is not the case. Kyle Larson is still dominating, Joe Gibbs Racing is still the team chasing Hendrick Motorsports around the track and Team Penske is not far behind. It will be interesting to see what the teams have for their first race using the 550 HP aero package in the playoffs. The South Point 400 can be seen Sunday night at 7 p.m. ET on NBCSN.

Here is my starting lineup for Las Vegas…

Brad Keselowski (8): Las Vegas Motor Speedway is the best track for Team Penske. You cannot go wrong with any of their drivers this week, but I am going to use Brad Keselowski. He has finished 2nd, 13th, 7th, 3rd, 2nd, 1st, 6th, 5th, 1st, 7th, 1st and 3rd in his last 12 races at Las Vegas. That is a 4.25 average finishing position over the last decade. That is too consistent to ignore this week. Keselowski advanced to the Round of 12 so he has a lot to race for Sunday night. I will roll the dice with Keselowski in Sin City and hope it comes up snake Eyes.

Allocation Saver is Ryan Blaney (8): I really had a hard time this week deciding between Brad Keselowski and Ryan Blaney. Keselowski is more consistent at Las Vegas Motor Speedway but Blaney has been more consistent on the 1.5-mile tracks this season. Blaney starts on the front row so he has the track position to lead some laps and score a lot of Stage points. Use Blaney over Keselowski if you do not trust the No. 2 car Sunday night.

Kyle Busch has the best average finishing position on the 1.5-mile tracks this season. He has finished 3rd, 5th, 1st, 3rd and 2nd on the intermediate tracks since the last race at Las Vegas (2.8 average finishing position). I only have one allocation left with Busch and I am saving it for Kansas, since he won that race in May. I recommend using Busch Sunday over William Byron if you have two or more allocations left with the No. 18 car.

Kyle Larson (1): Well this it… I have one allocation left with Kyle Larson and I am using it Sunday. I wanted to wait and use my last allocation with Larson for a race where he starts on the pole, has a history of running well and has a lot to race for. The race Sunday night checks all of the boxes. Larson led 103 laps, scored 10 Stage points and won the race at Las Vegas in March. I think he will do it again Sunday night.

William Byron (1): You cannot take your allocations with you into next season so you might as well use them up. I have one allocation with William Byron and I am using it Sunday night. The only other track I wanted Byron for is Martinsville, but I can find other drivers for that race. Byron won on a 1.5 track this year (Homestead) and he finished 8th (Las Vegas), 8th (Atlanta), 9th (Kansas) and 4th (Charlotte) on the intermediate tracks. The No. 24 starts 3rd Sunday night so Byron should score a lot of Stage points and have a great chance for another top-10 finish.

Other Choices: Alex Bowman (2): You cannot have too many Hendrick Motorsports cars in your lineup Sunday night. They have had the most consistent speed in the races using the 550 HP aero package. Alex Bowman did not have the best finish at Las Vegas in March, but his finishing position was misleading. Bowman had the 6th fastest overall speed. Many of the drivers in the garage say that Las Vegas Motor Speedway is starting to run a lot like Chicagoland Speedway since the track has begun to wear out. Bowman was the master at Chicago. He should be good Sunday night.

Ross Chastain is my top driver for Group C but I only have one allocation left with the No. 42 car. Chastain has been better in the races where the 750 HP aero package has been used, so I will save him for one of those races. I recommend using Chastain over Ricky Stenhouse Jr. if you have two or more allocations left.

Ricky Stenhouse Jr. (3): Ricky Stenhouse Jr. will be my driver for Group C Sunday night. He has been hit or miss on the 1.5-mile tracks this season. He finished 11th at Las Vegas, 12th at Atlanta, 12th at Charlotte and 34th at Kansas. Las Vegas Motor Speedway has been his best intermediate track. Stenhouse had the 12th fastest average green flag speed at Las Vegas in March. That was faster than Kevin Harvick, Tyler Reddick, Austin Dillon and Ross Chastain. Stenhouse should finish in the top 12 if the team has the same speed this week.