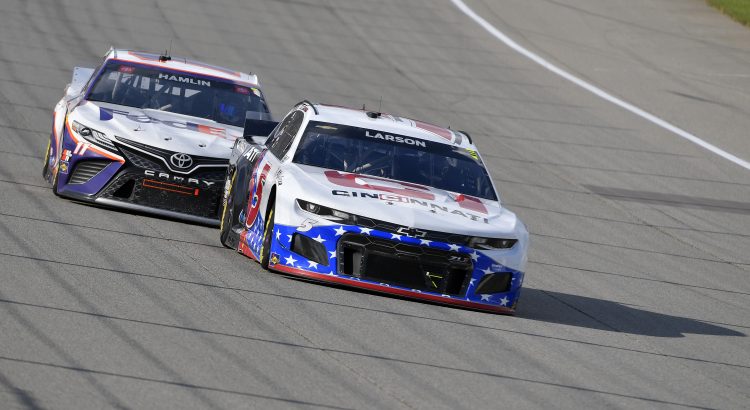 The NASCAR Cup Series will travel to Michigan International Speedway this week to compete in the FireKeepers Casino 400. The playoffs start next month and the racing is going to be exciting in these final four races. Michigan always puts on a good show since fuel mileage typically comes into play and there are plenty of lanes to search the track for grip. We will even have a few “rim riders” on the track Sunday… Yes, I am talking about Tyler Reddick and Kyle Larson. To make the race even more exciting, we may have Dale Earnhadt Jr. call a “Slide-Job!!!!” in the final laps. It should be fun to watch. The FireKeepers Casino 400 can be seen Sunday at 3 p.m. ET on USA Network.

It has been a while since the Cup Series competed on a 2-mile oval track. The last race was in February at Auto Club Speedway. Usually the drivers who run well in California, run upfront at Michigan. We can use some of the data from the race at Auto Club to help predict which drivers we should use in our Driver Group Game lineups, but the teams have learned a lot about the Gen-7 car since February. I will be using the data from practice, qualifying and the races on the intermediate tracks over the summer for the picks this week.

Here are the picks for the FireKeepers Casino 400…

KYLE LARSON (4): This is the week to use Larson if you have been saving your allocations with the No. 5 car. Larson has been the best driver on the large intermediate tracks. He won the race at Auto Club, finished second at Las Vegas and Kansas and “Yung Money” led 51 laps and finished ninth at Charlotte. Larson has five wins at 2-mile ovals on his resume, including three trips to Victory Lane at Michigan. This is the best race left on the schedule to use Larson.

DENNY HAMLIN (9): I will pair Kyle Larson with his golfing buddy this week. Hamlin has been awesome at Michigan in his career. His average finishing position in his last four races at Michigan is third. He did not run well at Auto Club earlier in the season, but Hamlin started off the season in a severe slump. He has been one of the best drivers on the large intermediate tracks once the Cup Series left the west coast. Hamlin finished fourth at Kansas and won the race at Charlotte (He actually won the race at Pocono too, but was DQ’d). The No. 11 car should be fast again Sunday.

ROSS CHASTAIN (3): My strategy the rest of the year is to include Chastain on my team at all of the non-Superspeedway tracks until I run out of allocations with the No. 1 car. This does not mean I will use Chastain every week, but his car is so fast that he has a good chance to score bonus points for qualifying each week. If Chastain dominates practice and starts up front, I will use him in the race. Chastain has led the most laps (314) and scored the most Stage Points on the large intermediate tracks this year. He should be one of the best picks again this week.

TYLER REDDICK (5): Can this be the year when Reddick gets the finish he deserves at Michigan? One of the fastest ways around the 2-mile oval tracks is to run right up against the wall. No one does it well as Kyle Larson and Reddick. He led 90 of the 200 laps at Auto Club in February. Reddick bounced off the wall one too many times and finished 24th. The No. 8 car is going to run up against the wall again Sunday and score a lot of Stage Points. If he can keep the car in one piece, Reddick will have a good chance to win the race.

CHRISTOPHER BELL (3): Bell said after his win at New Hampshire last month, “This is not going to be our only win this year. We have some tracks that are coming up on the schedule that I think we should win. Michigan is one of my favorite tracks. I expect to have another chance to win there.” I wrote his remarks in my notes and highlighted “PLAY BELL AT MICHIGAN.” He comes from the same school of racing as Kyle Larson and Tyler Reddick. Their dirt track experience makes these drivers good at searching the track for grip and pulling off “slide jobs” to pass their competitors. I expect Bell will be good again this week.

JOEY LOGANO (5): It is tough to predict when Logano is going to show up with speed. He has two wins this year, but also has four finishes outside the top-25. Logano “should” show up with a lot of speed this weekend. He participated in a tire test at Michigan in May. He had two days to work on his car and figure out how to maintain speed over a long run. Logano also won at Michigan in 2019 and he finished fifth at Auto Club in February. I will take a chance that this is the week when Logano runs up front.

ERIC JONES (4): Jones always gets extra motivated to run well at his home track. He needs a win in order to secure a spot in the playoffs. The No. 43 car may have the speed to get the job done. Jones qualified second, scored 18 Stage Points (the most in the race) and finished third at Auto Club in February (the other 2-mile oval on the schedule). Jones will be an excellent pick if he can bring the speed he had at Auto Club to Michigan this week. This is a good race to use an allocation with “That Jones Boy.”

DANIEL SUAREZ (3): My strategy with Ross Chastain can be applied to Suarez too. I plan have Suarez in my lineup at all of the non-superspeedway tracks since the No. 99 car is so fast and has a chance to score bonus points for qualifying in each race. Suarez is another driver who ran well on the 2-mile oval in California. Suarez started 15th and finished fourth. The Trackhouse Racing cars are just too fast to fade this year at downforce tracks.

* Be sure to check back Friday evening after qualifying for my starting lineup for the Truck Series race.