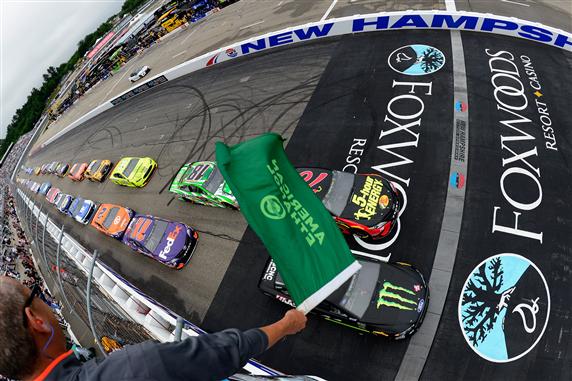 The Monster Energy Cup Series will travel to New Hampshire for some exciting racing on a 1-mile, flat, oval track. There really isn’t anything complicated about the race at the “Magic Mile.” The teams who can get their cars to roll through the center of the corners at each end of the track will be up front. Fantasy NASCAR players need to focus on the drivers with the best track history at New Hampshire. There is a good chance these drivers will be up front again this week. The Foxwood Resort Casino 301 can be seen Sunday at 3 p.m. ET on NBC Sports Network.

Kurt Busch won the pole for the Foxwood Resort Casino 301 last year. He led 94 laps, finished both Stages in the top 4 but only finished 8th in the race. The interesting thing about this race is the amount of dominators. Five drivers were able to lead at least 20 laps (Kurt Busch 94, Martin Truex Jr. 83, Aric Almirola 42, Kyle Busch 36 and Chase Elliott 23). Truex and Elliott ran well in the race. Both drivers led a lot of laps, finished both Stages in the top 3 and finished the race in the top 5. Kevin Harvick chased down Kyle Busch at the end of the race to win for the 3rd time at New Hampshire.

Kyle Busch (3): Busch has been a monster on the short tracks this season and he has been the best driver at New Hampshire over the last 3 seasons. Busch won at Phoenix and he finished 3rd at Martinsville. His success in those races should translate into speed at the Magic Mile. Busch finished 1st and 2nd in his last 2 races at this track and he led 223 laps. This is a great race to use another allocation with the No. 18 car.

Martin Truex Jr. (5): Truex has never won at New Hampshire (0-25) but that does not mean his not one of the best picks in the field. Truex has a series-best 4th place finish, led a series-high 332 laps and has the second-best Driver Rating (125.9) in the last 3 races at the Magic Mile. Truex won the last two short track races (Richmond and Dover) so he will have a good chance to score his first win at one of his many “home tracks”. I have no problem using another allocation with the No. 19 car Sunday.

Ryan Blaney (4): Joe Gibbs Racing and Team Penske Racing have dominated the short tracks this year so I will have another one of their drivers on my team this week. Blaney has started to figure out the Magic Mile. He finished 9th in 2017 and 7th last year. He has also scored Stage points in every Stage at the track. Blaney has also been decent on the short tracks this season. He finished 3rd at Phoenix, 4th at Martinsville and 4th at Bristol. I will use another allocation with the No. 12 car Sunday.

Denny Hamlin (3): Hamlin has always been at his best on the flat tracks. He has 3 wins and 4 finishes in 2nd place at the Magic Mile. Hamlin usually runs up front so that means the No. 11 car should score a lot of Stage points this week. If you want to know where Hamlin will finish in the race Sunday, a 5th place prediction is not a bad call. Hamlin finished 5th at Phoenix, 5th at Martinsville, 5th at Bristol and 5th at Richmond. I will happily take a 5th place finish from him Sunday.

Jimmie Johnson (5): Johnson has 3 wins at the Magic Mile but his last trip to Victory Lane was in 2010. He has not been bad at the track over the last decade, he just hasn’t won. Johnson finished 10th, 14th and 10th in his last 3 races at New Hampshire. He finished 10th, 12th and 14th in his last 3 short track races this season. There is a good chance the No. 48 car will finish near the 10th position Sunday. I will take a top 10 from Johnson and save my allocations with my other drivers for the larger tracks.

William Byron (8): Sometimes in Fantasy NASCAR you need to go with your gut feeling with a pick. That is what I am doing with Byron this week. The No. 24 car is starting to show they can run in the top 10. Byron should have a lot of confidence this week since he won a Truck Series race at New Hampshire and he had one of his best finishes in 2018 at this track. Crew Chief Chad Knaus will setup the car to qualify up front and use pit strategy to keep his young driver up front. I just have a good feeling about this car for the race Sunday.

Ryan Preece (8): Preece will have some momentum after his 21st place finish at Kentucky (Pretty good for his team). Now Preece will compete at a track he knows well.  The Berlin, Connecticut native has 23 starts in the NASCAR Wheelen Modified Series, 1 start in the K&N Pro East Series and 5 starts in the Xfinity Series at the Magic Mile. That is a lot of experience at New Hampshire. If Preece cannot figure out this track, he probably should not be in a Cup Series car. I have a good feeling about the No. 47 car this week so I will have Preece in my lineup.