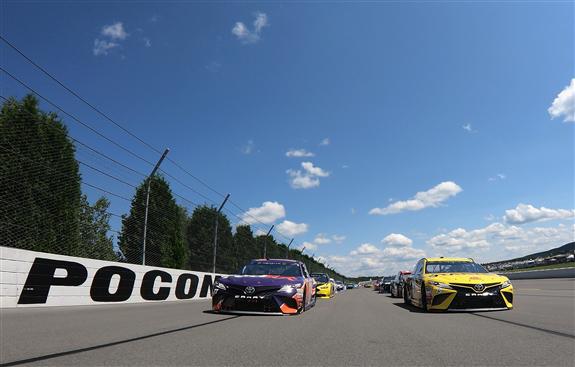 The Monster Energy Cup Series heads back to Pocono Raceway for the Gander RV 400 (Not that we need to see a rerun of the worse race of the season). NASCAR knew the 2019 aero package would not work well at every track, but the rules package is not going to change before the race Sunday. The MENCS teams are pretty smart. Give the teams 8 weeks to figure something out and usually they will find speed or in the case of the race at Pocono… find a way to pass. We will see how it all plays out at the Tricky Triangle. The Gander RV 400 can be seen Sunday at 3 p.m. ET on NBC Sports Network.

William Byron won the pole for the Pocono 400 in June. He led 25 laps to start the race before falling back in the pack. The young driver finished 9th. Kyle Larson used strategy (He stayed out while most of the leaders pitted before the end of the Stage) to led 35 laps and win Stage 1 and Stage 2. Martin Truex Jr. had a fast car but it blew up as the No. 19 fought the No. 18 for the lead. In the end, Kyle Busch held off Brad Keselowski to win for the 3rd time in the last 4 races at Pocono.

After the June race at the Tricky Triangle, Kyle Busch said, “Fast cars are fast cars regardless of the aero package. The 2019 package was designed to bunch up the field, encourage passing, and prevent the leader from running away. At Pocono it did the exact opposite. Today I was told I had an 8 second lead, the field was completely spread out, and passing was next to impossible. The package won’t work well everywhere and this is one of the tracks where we need a change.”

Brad Keselowski (6): Keselowski had a good race in June at Pocono. He qualified 5th, scored 13 Stage points, led 4 laps and finished 2nd. Keselowski has been very consistent at the Tricky Triangle. The No. 2 car has finished 7 of the last 8 races in the top 5. If you take away his finish last year when he was taken out while battling for the lead, Keselowski has a 3.1 average finishing position since 2014 at Pocono. He is the safest pick in the field this week.

* If you want to try and save an allocation with Kyle Busch or Brad Keselowski, use Kyle Larson. He had a great race in June at Pocono. Larson qualified 7th, won Stage 1, won Stage 2, led 35 but a late penalty sent him back in the field. He should run well Sunday.

Clint Bowyer and Denny Hamlin are the best choices in Group B but I only have 3 allocations left with each driver. I want to save them for the playoffs so I will try to find some value picks this week.

Ryan Blaney (3): Blaney went to Victory Lane at Pocono in 2017. Team Penske usually brings cars to the Tricky Triangle with a lot of speed on the long straightaways. Blaney only finished 12th in the June race but I expect the No. 12 car to have more speed Sunday. Blaney has scored Stage points in 5 of the last 6 Stages at Pocono so he is good at running up front. I will roll the dice with Blaney this week because I think his team will dial more speed into his car.

Erik Jones (4): Jones has been one of the best picks at Pocono. He has 5 races on his MENCS resume. He finished 3rd, 5th, 29th (transmission failure), 8th and 3rd. Joe Gibbs Racing cars are usually pretty reliable so if his car does not have mechanical problems, Jones should finish in the top 5. The No. 20 car qualified 4th and finished 3rd in June. I expect a similar race from Jones Sunday.

Daniel Suarez (7): Pocono ranks as the 2nd-best track for Suarez. He has finished 3 of the last 4 races at the Tricky Triangle in the top 8. Suarez qualified 9th, scored Stage points in both Stages, led 9 laps and finished 8th. I will gladly take a repeat performance from the No. 41 car Sunday. Suarez needs points and Pocono is an easy track to use pit strategy to steal Stage points and put your driver into a position to win. I expect a good Fantasy NASCAR day for Suarez this week.

William Byron (8): Pocono is the 2nd-best track for Byron. He has 3 races at the Tricky Triangle on his MENCS resume. Byron finished 9th, 6th and 18th. Byron won the pole for the June race at Pocono. He also finished 2nd in Stage 1, 3rd in Stage 2, led 25 laps and finished 9th. That kind of production from a driver I do not plan to use many allocations with is too good to ignore. I will take a chance with Byron Sunday.

Michael McDowell (6): McDowell is one of the best drivers in Group C at using the draft. The June race at Pocono was a lot like a restrictor-plate race (without the passing). McDowell qualified 28th (He needs to improve his starting position) and finished 20th. McDowell has an 18th place average finishing position in his last 4 races at the Tricky Triangle. I will gladly take a top-20 finish from him Sunday so I can save Chris Buescher and Daniel Hemric for the more predictable tracks.

Matt DiBenedetto (7): DiBenedetto has horrible stats at Pocono but he only has one race at the track in a decent car. In June he started his first race at the Tricky Triangle with some horsepower under the hood. DiBenedetto quailed 22nd, had a 19th place average running position and finished 17th. Not bad. I expect DiBenedetto to have a similar race Sunday.