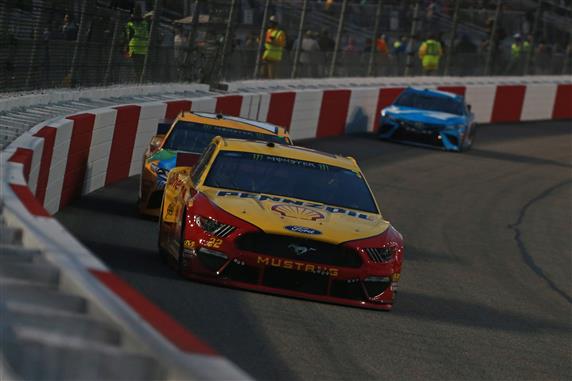 The second race of the 2019 MENCS Playoffs is already here. Before you know it we will be at Homestead lining the cars up to crown a champion. But before we get to Florida, we need to have a Saturday night short track race at Richmond Raceway. It does not get any better than that. The Federated Auto Parts 400 can be seen Saturday night at 7:30 p.m. ET on NBC Sports Network.

* NASCAR will inspect the cars Saturday afternoon. Any drivers who fail once will have their qualifying time disallowed and will start from the back. They will be scored from the back in Fantasy NASCAR.

The cars will have the 750 HP engines with the 2” splitter, 8” spoiler and no aero ducts. This is the same package they have used in the past except with a larger spoiler on the rear of the car. The drivers who ran well at Richmond in the past should be fast Saturday night.

Kevin Harvick won the pole for the race at Richmond in April. It was his second consecutive pole at the track and his second consecutive pole on a short, flat track. Harvick was only able to lead 30 laps before the Joe Gibbs Racing cars took over. Kyle Busch dominated the early part of the race. The No. 18 car won Stage 1, led 101 laps and finished 8th. Martin Truex Jr. was the driver to beat though. Truex qualified 5th, lead a race high 186 laps, scored 15 Stage points and went to Victory Lane. It was the second consecutive race at Richmond in which Truex was the main dominator.

Martin Truex Jr. (4): Truex Jr. has been the man at Richmond for two years. He has a series-high 121 Driver Rating and he led the most laps (668 laps led are 400 more than any other driver) in the last 5 races at the track. Truex led a race-high 186 laps, finished 3rd in Stage 1, 2nd in Stage 2 and won the race in April. He also has the second-best Driver Rating on the short, flat tracks this season. I plan to use an allocation with Truex Saturday night.

Kevin Harvick (3): Since Martin Truex Jr. is so good at Richmond; I need a driver to score me some qualifying points. Harvick has dominated qualifying on the short, flat tracks for 2 seasons. He won the pole at Phoenix and came back to win at Richmond earlier this season. If I have to use the No. 4 car in the race, I will be in a good situation. Harvick ranks 3rd on the short, flat tracks this season and he has finished 8 of the last 10 races at Richmond in the top 5.

Denny Hamlin (2): I hate to use an allocation with Hamlin this early in the playoffs but the Virginia native is great at his home track. Hamlin has 3 wins at Richmond and he has a 5th place average finishing position at the track since 2015. When a driver is almost a lock for a top-5 finish, you need to have him in your lineup. I have no problem using one of my last allocations with Hamlin Saturday night if the No. 11 car has speed in practice.

Jimmie Johnson (3): I thought about using Kurt Busch as my second driver but Richmond ranks as the 11th best track for Busch. There are better tracks to use my last allocation with the No. 41 car. Instead I will use a driver who has 3 wins at Richmond. Johnson has not been to Victory Lane at this track since 2008 but that does not mean he is a bad pick. Johnson has finished 9 straight races at the Richmond in the top 12. Johnson should compete for a top 10 Saturday night.

Clint Bowyer (1): This is the week to use an allocation with Bowyer. He has been very good at Richmond since joining Stewart-Haas Racing. Bowyer qualified 14th, finished 5th in Stage 1, 5th in Stage 2 and finished 3rd in the April race at Richmond. Bowyer finished both races at Richmond in the top 10 last year too. Bowyer has been the second-best driver in Group B on the short, flat tracks this season. I will use one of my last allocations with Bowyer this week.

Ryan Newman (6): Newman has started to run well ever since he found himself in a position to make the playoffs. He is getting the most out of his car now that he is competing for a championship. Newman has always been known as a good driver on the short, flat tracks. He finished 9th in the April race at Richmond and he should have a good chance to finish in the top 10 Saturday night.

Matt DiBenedetto (4): I had to decide between Chris Buescher and Matt DiBenedetto for my top pick in Group C. DiBenedetto has been better on the short tracks so I will go with the No. 95 car. DiBenedetto finished 5th at New Hampshire in July and that track is similar in size and shape as Richmond. He has a lot of momentum right now. I plan to use an allocation with DiBenedetto this week.

Ty Dillon (4): Dillon will be a driver I will be watching this week. The No. 13 car has been good on the short tracks this season. Dillon finished 15th at Phoenix, 21st at Richmond and 16th at New Hampshire. The short, flat tracks have been very good for the No. 13 team. I plan to use an allocation with Dillion this week if he has any speed in practice because I would love to have 4 allocations left with DiBenedetto with 8 races left on the schedule.