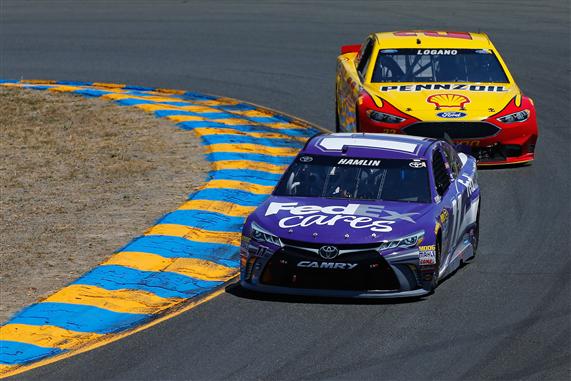 The Monster Energy NASCAR Cup Series will travel across the country for the first road course race of the season. The Toyota / Save Mart 350 can be seen Sunday at 3 p.m. ET on Fox Sports 1.

The MENCS will have two practices Friday before the cars are set to qualify Saturday morning (afternoon on the East Coast). That means we will get to see two practices before our lineups need to be selected Saturday at 8 am ET. I will post my updated picks for the Driver Group Game Friday evening after the final practice.

The last race at Sonoma had many dominators. Kyle Larson won the pole and led 9 laps. Martin Truex Jr. ran down Larson and led the next 25 laps. Jimmie Johnson used pit strategy to take the lead and he was out front for the next 12 laps. Brad Keselowski, Joey Logano and Denny Hamlin each led 10+ laps in the final stage. In the end it was the No. 4 car that ran Keselowski with 22 laps to go. Kevin Harvick won his first race at the track and the second race in a row for Stewart-Haas Racing at Sonoma.

Sonoma is the more technical track or the three road courses in the MENCS (Watkins Glen and Charlotte the other two). Most drivers can find a way around Watkins Glen and Charlotte but it takes a lot of road course skill to brake, shift and accelerate through this twisting 2-mile track. The drivers who have run well here in the past will be up front again Sunday, regardless of how they have been running this season. This is truly a driver’s track.

Kevin Harvick and Kyle Busch will be the favorites to win Sunday but I think it is too risky to use an allocation with them at Sonoma. These two drivers need to be saved for the 1.5-mile tracks because they are so dominant and it is hard to find value elsewhere at the downforce tracks. The No. 4 or No. 18 car will likely be up front, but I will fade them and save my allocations for more predictable tracks.

Martin Truex Jr. (8): The No. 78 car was the most dominant car on the road courses in 2017. Truex qualified 3rd and led the most laps in both races (Sonoma and Watkins Glen). He went to Victory Lane at Watkins Glen and had a great chance to win at Sonoma if his battery did not go dead half-way through the race. I have 8 allocations with Truex so I am not worried about burning one at a road course. Truex should also have a good chance to score bonus points for qualifying since he has started the last two races at Sonoma in the top 3.

Denny Hamlin (9): Hamlin is penciled in as my 2nd driver in Group A. I will be watching Kyle Larson in practice Friday to see what kind of speed the No. 42 car has. Larson won the pole for the race at Sonoma last year and has been the best driver at qualifying on the road courses. I may use the No. 42 car for qualifying points only this week.

Hamlin is more likely to be on my team because he is a very good road course driver. He dominated the race at Sonoma in 2016 until he was passed on the final lap by Tony Stewart. If the No. 11 car has speed in practice I will have him on my team this weekend.

We only get 9 allocations with our drivers so we must pick and choose the tracks to save the top talent even if it means sacrificing a few positions in the race. Kurt Busch and Clint Bowyer are the best picks in Group B. Stewart-Haas Racing has won the last two races at Sonoma and I think they will win again Sunday. These two drivers have also been the best two drivers on the 1.5-mile tracks so it will be a good idea to fade them this week unless you have 6 or more allocations with one of these drivers. I would also fade Ryan Blaney, Chase Elliott and Erik Jones. They simply do not have a history of running well in these races and their allocations have more value at the more predictable tracks.

Jamie McMurray (7): McMurray should be on every team this week. He is one of the best road course races in Group B. Last year he qualified 2nd, led a lap and finished 10th at Sonoma. His average finishing position in the last 4 races at Sonoma is 10th. I would gladly take a 10th-place finish from McMurray this week and move onto to Chicago. McMurray should be a good pick for qualifying points too. The No. 1 car has started on the front row in 3 of the last 5 races at Sonoma.

Paul Menard (7): Menard is one of my sleeper picks this week. I doubt to many people will have the No. 21 car in their lineup so if he performs well in the race we can make up a lot of ground on the competition. Menard is a decent road course driver. His average finishing position in the last 4 races at Sonoma is 11th. Wood Brother’s Racing will provide Menard a better car than what he had while driving for Richard Childress Racing. He will also have the resources of Brad Keselowski and Joey Logano to help him prepare for the race. I expect a top-10 finish from Menard this week.

Ryan Newman (8): If you want to play it safe this week, Newman is the driver for you. He will not win the pole. He will not finish in the top 5. But he will finish somewhere between 6th and 15th. When you are saving allocations it is wise to play the safe drivers even if their chances of winning the race are slim. Newman will be one of the drivers I will be watching closely in practice. Right now he is penciled in as my 3rd driver in Group B.

AJ Allmendinger (9): When the MENCS competes in the Gold Rush area of the country it is hard not to be tricked by the “Fools Gold.” That is just what Allmendinger is at Sonoma. Everyone will have him on their team. He will qualify up front. Lead a bunch of laps and have problems at the end of the race which will cause him to finish outside the top 25. Allmendinger has an average finishing position of 31st in the last 4 races at Sonoma. He always overdrives the car because he knows this is one of his only shots to win the race. The only reason Allmendinger is on my team is for qualifying points. He has started every race at Sonoma while driving for JTG Daugherty Racing in the top 5. He is almost a lock to start up front again Sunday. Just do not get tricked into starting Allmendinger in the race.

Chris Buescher (6): Buescher is the best pick in Group C this week. He said before the race last year that AJ Allmendinger taught him a lot about road course racing. It showed in the race. Buescher qualified 9th, led 4 laps and finished 19th. Now that he has more experience I expect him to run better than he did last season. JTG Daugherty knows how to set up a car for this track thanks to the knowledge of Allmendinger. Buescher should finish in the top 15 Sunday and that is not too bad for a Group C driver at this track.

Michael McDowell (8): McDowell is penciled in as my 2nd driver in Group C. He has the talent to run in the top 20 at Sonoma but will his car be fast enough in the race. McDowell qualified 16th and finished 14th last year at Sonoma while driving for Leavine Family Racing. I will be watching McDowell closely in practice to see if he can get the same speed out of his Front Row Racing Ford.

I will post my final picks for Driver Group Game after final qualifying Saturday.