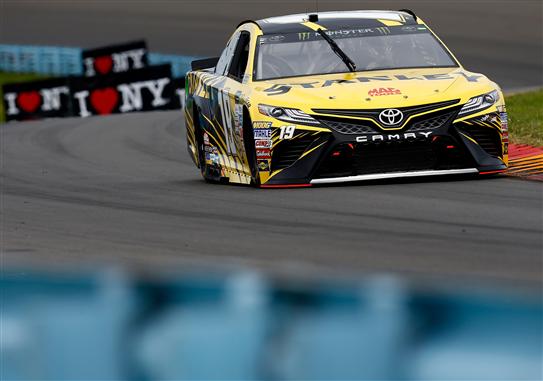 The MENCS competes at Watkins Glen this week for the Go Bowling at the Glen. Expect some of the drivers who we are not used to seeing up front lead some laps today. The race Sunday can be seen at 2 PM ET on NBC.

NASCAR screwed up Fantasy NASCAR last week by inspecting the cars after qualifying and sending 13 cars to the back of the field. They plan to do it again this week but this time they will inspect the cars Sunday morning, instead of Saturday night. The inspection process took 4 hours last week. The cars should make at least one pass through inspection by about 10:30 AM ET. I should be able to put together the starting lineup once each car goes through inspection once.

The picks posted in this article are based on the qualifying positions from Saturday. I will update my picks if any of my picks fail post-qualifying inspection and are set to the back. Be sure to check this article before the race to see if any of the picks had to be changed.

Kyle Busch (5): Busch had the most dominant car at Watkins Glen last year and it looks like he does again this week. The talk in the garage is that the No. 18 car is the team to beat. He qualified 2nd and had one of the fastest cars in practice. What made his car look so fast is that he posted his fastest lap in practice on lap 8. This car not only has great short-run speed but it gets faster as they get deeper into a run. Busch is the favorite to win Sunday and I have no problem burning an allocation with him.

I am not happy with my Group B picks. I should have used Chase Elliott or Erik Jones instead of taking a chance with Matt Kenseth. I do like AJ Allmendinger and Daniel Suarez had good speed in practice. At least I will be saving allocations this week.

A.J. Allmendinger (8): I know it is hard to trust Allmendinger because we have been burned by him so many times on the road courses. He is a lot better at Watkins Glen than he is at Sonoma so I think we need to give him a chance. He has run 9 races in his career at Watkins Glen. Allmendinger has a 9.8 average starting position and a 9.3 average finishing position. He has only finished outside the top 10 one time in the last decade. He “should” be a safe pick this week. Allmendinger finished 2nd in the Xfinity Series race Saturday and it was impressive because he had to drive through the field from the 19th position in the last stage. I will give Allmendinger a chance this week.

Daniel Suarez (8): Suarez should have some momentum after his 2nd-place finish at Pocono. The No. 19 car looked really good in practice but I am not sure what happened in qualifying. He went out and posted a decent lap but fell outside the top 20 as the other drivers made their runs. Suarez never went back out to try and improve his lap and that just puzzles me. The word in the garage is that the Joe Gibbs Racing cars are bad fast this week so I will take a chance with Suarez.

Michael McDowell (6): McDowell has a great chance for a top 10 finish this week. If you have him on your team, you must use him this week. McDowell was 9th fastest in the first practice and 5th fastest in final practice. McDowell qualified 12th and I am not worried about him falling back during the race. He grew up road course racing and he has the talent to run well Sunday.