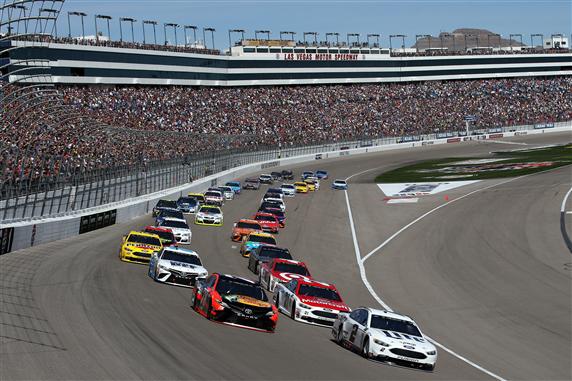 Things just got real… All of the racing for a playoff spots is over. The field of 16 drivers competing for the championship has been set. It is now time to compete for 2019 MENCS trophy. It all begins in Sin City at Las Vegas Motor Speedway. To make it even better, NASCAR moved the race to under the NEON lights of Las Vegas. The South Point 400 can be seen Sunday at 7 p.m. ET on NBC Sports Network.

NASCAR will be back to a normal schedule this week. There will be two practices Friday. The first practice is at 4:30 p.m. ET (NBCSN) and final practice is at 7:30 p.m. ET (NBCSN). Qualifying will be Saturday at 4 p.m. ET. I expect NASCAR to inspect the cars Sunday morning since that is the schedule they have had when there were two practices Friday and qualifying Saturday. If this is the case, any car that fails once will go to the back and be scored from the rear in Fantasy NASCAR.

The cars will have the 550 HP engines with the 2” splitter, 8” spoiler and aero ducts. Las Vegas is a high-banked 1.5-mile oval. It is similar in banking to Darlington so I would look at the results from the Southern 500 for the race at Las Vegas.

My early week pick for the pole is Kevin Harvick. There have been seven races on the 1.5-mile tracks this season and Harvick won the pole for two of them. One of the races was the Pennzoil 400 at Las Vegas in March. Stewart-Haas Racing said they have brand new cars for this race and they have been working on them since May. I am sure the No. 4 car will be fast and compete for the pole Saturday.

Here are the early week driver rankings for Las Vegas…