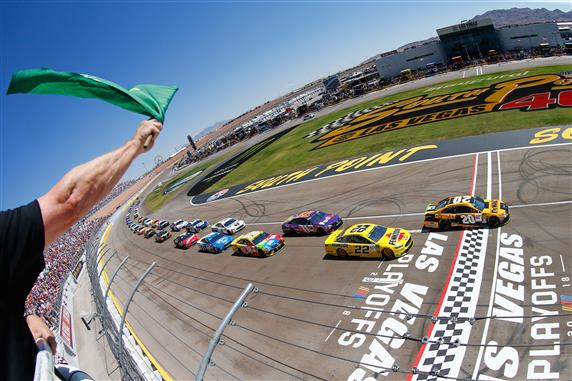 I expect NASCAR to inspect the cars Sunday morning since that is the schedule they have had when there were two practices Friday and qualifying Saturday. If this is the case, any car that fails once will go to the back and be scored from the rear in Fantasy NASCAR.

The cars will have the 550 HP engines with the 2” splitter, 8” spoiler and aero ducts. Las Vegas is a high-banked 1.5-mile oval. It is similar in banking to Darlington so I would look at the results from the Southern 500 for the race at Las Vegas.   .

Kevin Harvick has a good race in March at LVMS. He won the pole, won Stage1, finished 2nd in Stage 2 and led a race high 88 laps. The No. 4 car finished 4th. Kyle Busch also had a good race. The No. 18 car qualified 3rd, finished 2nd in Stage 1, led 13 laps and finished 3rd. Team Penske had the cars to beat though. Brad Keselowski qualified 2nd, scored 7 Stage points, led 17 laps and finished 2nd. Joey Logano took over the second-half of the race. The No. 22 car qualified 10th, scored 17 Stage points, led 86 laps and went to Victory Lane.

Here are my picks for Sin City…

Kevin Harvick (3): Harvick will have the most momentum heading into the playoffs after his win at the Brickyard. Harvick had a good run at Las Vegas in March. He won the pole, led a race-high 88 laps and finished 4th. Stewart-Haas Racing was in a slump at the beginning of the season so the No. 4 car should be faster this week. I would not be surprised to see Harvick score bonus points for winning the pole, lead the most laps again and finish in the top 3.

Joey Logano (2): A driver from Team Penske of Kevin Harvick has won 7 of the last 8 races at Las Vegas Motors Speedway (Martin Truex Jr. won the other in 2017), so I want to pair one driver from Team Penske with the No. 4 car. Joey Logano won the race in March at L.V. and he has momentum after his strong run last week. The No. 22 team has been “testing” this summer. I expect them to step up their game and get back to where they were in the playoffs last year.

I would love to use Denny Hamlin and Kurt Busch every week but unfortunately this is an allocations game.  I have 1 allocation left with Busch and 2 allocations left with Hamlin. I am saving them for other tracks in the playoffs.

Erik Jones (2): Jones has been pretty consistent this season on the 1.5-mile tracks. He has finished 5 of the 7 races in the top 7. I heard that Joe Gibbs Racing built new cars for the playoff races. Usually when a team spends a lot of time building new cars, they show up at the track with some speed. I do not expect the No. 20 car to qualify well (Joe Gibbs Racing has not been good at qualifying on the 1.5-mile tracks this season) but I expect Jones to race well Sunday night.

Aric Almirola (4): I am going to roll the dice in Sin City with the No. 10 car. Almirola has been a hard driver to trust this summer but Las Vegas ranks as one of his best tracks and I need to save allocations. Almirola has finished 7th, 6th and 10th in his 3 races at Las Vegas in Stewart-Haas Racing cars. He has the 6th-best average finishing position in the 7 races on the 1.5-mile tracks this season so he should be a good pick. Almirola finished 7th at Las Vegas in March. I hope he can do it again this week.

Alex Bowman (5): Bowman has been at his best on the 1.5-mile tracks this season. He won the race at Chicago and finished 2nd at Kansas. Those two tracks are similar to Las Vegas. Bowman has the 4th-best average finishing position on the 1.5-mile tracks this season. He has actually been more consistent than Kevin Harvick, Denny Hamlin, Kyle Busch and Brad Keselowski. The No. 88 car may not qualify well but I expect a top 10 finish from him Sunday night.

William Byron (5): I did not have Byron in the playoffs before the season started but he really began to run well this summer. He has been the best driver at qualifying and the Driver Group Game awards points for qualifying so the No. 24 car has added value in this game. Byron has a 9.4 average starting position and a 13.4 average finishing position on the 1.5-mile tracks this season. I expect Byron to qualify up font and finish around the 10th spot in the desert.

I made a mistake by not saving at least one allocation with Daniel Hemric. Richard Childress Racing knows their best chance to run well is to trim their cars out for qualifying so they can start up front. This strategy does not lead to good finishes in the race but it gives Hemric value in the Driver Group Game because of his ability to score bonus points for qualifying. I would have Hemric on my team over Matt DiBenedetto if I could.

Chris Buescher (2): Buescher is driving more like a Group B driver than he is a Group C driver this season. He consistently finishes in the top 15 and that makes him the best pick from this group. Buescher only finished 18th in the March race at Las Vegas but he heated up over the summer. Buescher will likely qualify around the 20th spot and finish inside the top 15 Sunday night. That is good enough for me.

Matt DiBenedetto (4): DiBenedetto has not been very good on the 1.5-mile tracks this season but he is still the 3rd best choice in Group C (behind Chris Buescher and Daniel Hemric). DiBenedetto had his best race at a 1.5-mile track in July at Kentucky. He qualified 23rd and finished 16th. He has heated up over the summer so he should have a good race this week. I do not plan on using DiBenedetto in the race but he should be a good backup plan to have on my bench.