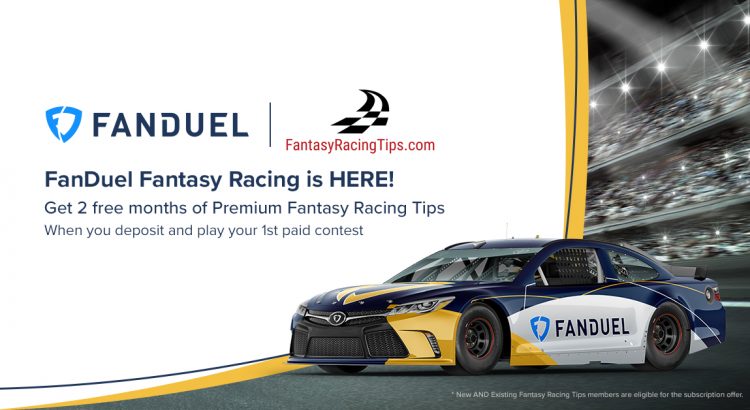 FanDuel launched their first auto racing contests last week and it was hard to get a feel of the game because it was Talladega and that race does not represent what we will see the rest of the season. The AAA 400 Race for Autism at Dover International Speedway should give us a much better feel for the new FanDuel Contests. I crunched the numbers, evaluated the stats and wrote this preview to put you in the best position to win this week.

Get started on FanDuel with FantasyRacingTips.com. Free with your first deposit and paid entry on FanDuel, you will receive: Two (2) Months Subscription as a Premium Member to Fantasy Racing Tips and 20% Play Bonus (Up to $100). Click here to sign up now: FantasyRacingTips Promotion

Scoring for FanDuel will be more focused on where a driver finishes the race than how many laps he leads or how many positions he gains in the race. There are no points awarded in FanDuel for fastest laps and that is a good thing. The 0.1 point for every Lap Completed means you will need drivers who finish on the lead lap. If your driver crashes early in the race, your lineup is toast! So make sure you select the drivers who finish up front and complete all of the laps when you fill out your FanDuel Lineups.

The trend in the last 4 races at Dover is to have 2 Dominators (drivers who lead the majority of the laps). Our strategy this week must be to find these two dominators for our lineups. The best way to find these drivers is to look at the long lap speeds and information coming out of the garage. I will try to get the 15 and 20 lap speeds from final practice and post any information I get in my Garage Talk Notes this week. This should give us the best chance of having the two dominators in our lineup and the best chance of winning some money this week.

The other three selections for our team will be drivers who have a history of running well at the Monster Mile, ran fast laps in practice and have a great chance of completing all of the laps and scoring some place differential points Sunday.

5 Drivers to Consider for Dover

Kyle Busch ($12,700) has been the best driver in the MENCS this season and that should not change Sunday. Busch 3 wins at Dover, including the October race last year. Busch has been much better in the fall races at the Monster Mile than he has been in the spring races, but he is running too well right now to ignore. Busch is the highest priced driver in FanDuel but he will be worth the money of he turns fast laps in practice and qualifies up front Friday.

Kyle Larson ($12,000) would be the best driver for your FanDuel Contest if he did not have engine problems in 2016. Larson has finished 2nd in the last 2 spring races at Dover. Last year he led 378 laps at the Monster Mile and scored in the top 2 in FanDuel points in both races. Larson also scored the most FanDuel points at Bristol this season. He should be a good pick to dominate the race Sunday.

Martin Truex Jr. ($11,800) has been the best driver for your FanDuel Contest over the last 4 seasons. He has an average finishing position of 4.25 in these 4 races and that includes a trip to Victory Lane in 2016. Truex has led an average of 96.75 laps at Dover since 2015. He is very good at his home track and the No. 78 car most be considered a favorite to dominate this race Sunday.

Chase Elliott ($11,500) came so close to winning the last race at Dover. He was leading with one lap to go and Kyle Busch passed him on the outside. Elliott has four races at Dover on his resume and he has NEVER finished outside the top 5. His average finishing position at this track is 3.2. He said last year that Jimmie Johnson and Jeff Gordon taught him how to race this track. It looks like they shared all of the secrets with Elliott because he is one of the best now. The only driver to score more FanDuel points at Dover than Elliott is Martin Truex Jr. Elliott should finish up front Sunday.

Jimmie Johnson ($12,300) is overpriced this week. He does have 11 wins at this track but is that enough to price him higher than Martin Truex Jr., Kyle Larson and Kevin Harvick? The reason Johnson is on my list is because he is so consistent at Dover. He always finishes in the top 10 and he has led laps at the Monster Mile in 13 of his last 14 races. I will be watching the No. 48 car closely in practice. If Johnson looks like himself this week, I will pay up to have him in my lineup because I am sure many people will fade him based on his recent performance.

Clint Bowyer ($10,500) has been hit or miss at Dover in his career. I think he will be a hit this week. Bowyer is having a great season and he had one of his best races in 2017 at Dover. Bowyer qualified 19th and quickly made his way through the field for a 6th-place finish. The Stewart-Haas Racing cars have been very good this season so I want at least one of them in my lineup.

Ryan Newman ($9,600) is a great value pick for his price. Newman will not run in the top 5 the entire race but he will keep his car close enough to the top 10 to make a run to the front at the end of the race. That is just what he is good at doing. Newman ranks 7th in FanDuel scoring in the last 4 races at Dover. He would be a great 4th driver for your team.

Daniel Suarez ($8,300) will be a great pick for your team at Dover. If you believe in using a driver at his best tracks, this is the best one for Suarez. He qualified in the top 5 for both races last year and he finished 6th and 8th. After a slow start to the season the No. 19 team is starting to heat up. His price makes him one of the best values in the game this week.

Kasey Kahne ($7,300) has been very good at Dover in his career. He ranks 6th in FanDuel scoring in the last 4 races and he has the 24th highest price. You will not find a better value pick for your contest then Kahne this week. He will be in all of my lineups if he looks halfway decent in practice. I just hope he qualifies outside the top 15. That will even add more value to him this week.

David Ragan ($5,800) is one of the drivers I will be watching closely in practice. Front Row Motorsports started to get their cars and engines from Roush Fenway Racing before the race at Bristol. This change has really benefitted Ragan. It is like he is driving for Roush Fenway Racing again. He finished 12th at Bristol and 6th at Talladega. The DFS games have not adjusted his price to reflect his strong runs so I plan to take advantage of his cheap price and pay up for the top drivers this week.

– Be sure to check FantasyRacingTips.com Saturday evening for my updated FanDuel lineup!!

** Remember to make a deposit on FanDuel and enter a NASCAR contest this week to receive two (2) free months of premium membership to Fantasy Racing Tips. Click here to sign up: FantasyRacingTips Promotion **