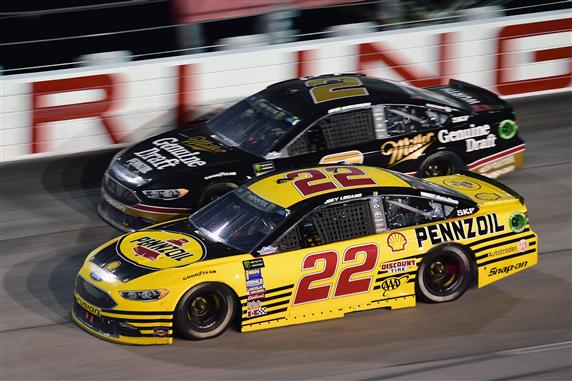 NASCAR returns this week after a 71 day break. It seems like forever since we had any on-track activity. I am sure the drivers are excited too. I missed the FanDuel DFS NASCAR contests because I was on a hot streak on their site before the cornoavirus rained on my parade. Now it is time to make up the money I missed out on the last two months. My picks have won a lot more on FanDuel than on DraftKings so keep that in mind this week.

There are 29.3 points available for leading laps and FanDuel does not award fastest laps points. Typically I ignore the dominator points in FanDuel and focus on drivers who can score place differential points. This week we need to try and get the main dominator into our lineups. Drivers will earn 29.3 bonus points for completing all of the laps so it will be important to select drivers who can keep their car off the wall Sunday.

NASCAR drew for the starting position and the result was a lot of good drivers starting in the back with a good chance to score place differential points.

I like to select a list of “Core Drivers” to build my DFS contests from. If you build your lineups around the list of dominators and place differential drivers listed above, you should be good to go Sunday. 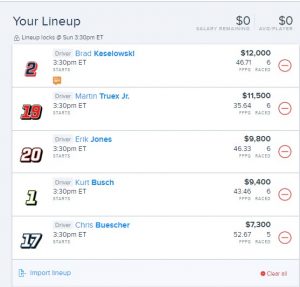 Martin Truex Jr. got off to a slow start to the 2020 season but that is not because his car has been slow. I am hoping that the two month break is just what the No. 19 team needed. Truex starts 15th and he should be able to move into the top 10. Truex is a better pick on FanDuel than he is on DraftKings.

Erik Jones won this race last year from the 15th starting spot. Now we get to see if he can do it from the 20th starting position. Darlington ranks as the best track for Jones. He has competed in three Cup Series races at the Track Too Tough to Tame. He finished 1st, 8th and 5th. Not too bad.

Kurt Busch is one of the best values in the game this week. He starts 22nd and he has finished 3rd, 6th and 7th in his last three races at Darlington. He also finished 3rd and 6th in his last two races this season. Busch should score a lot of points from the middle of the pack Sunday.

Chris Buescher should be a lot for all Cash Contests Sunday. Darlington ranks as his best track. He has never finished worse than 17th at the track Too Tough to Tame. He should score 7-10 place differential points from his 24th place starting position. 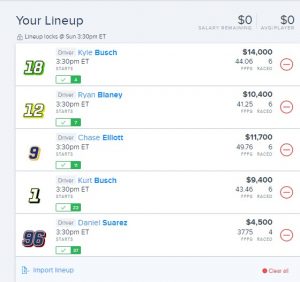 The lineup I like the best is Kyle Busch, Chase Elliott, Kurt Busch, Erik Jones and Ty Dillon but it is so similar to my Cash Contest lineup, so I will write about a different lineup I like.

Kyle Busch is going to put some serious heat on Brad Keselowski for the lead at the start of this race. Most of the drivers will be a bit timid without any practice, but not Busch. He will driver his car into turn one at 100% throttle. He will make it work and run a lot of laps up front. Busch should be a good pivot from Keselowski.

Chase Elliott has been the fastest driver in the sport this year. He leads the Cup Series in Driver Rating, Fastest Green Flag Speed, Laps Lead and he is second in Average Finishing Position. I doubt the No. 9 team lost the speed they had. I expect Elliott to get to the front early in this race.

Ryan Blaney could be a driver who is overlooked this weekend and that could be a mistake. He had one of the fastest cars before the Cup Series was shot down. I expect the No. 12 car to be fast again. Getting Blaney at a reduced price and lower than normal ownership sounds good to me.

I am all in on Kurt Busch. He is just too good of a value to ignore from the 22nd starting position. His upside is very high and that is what you want in Multi-Entry Contests.

Guant Brothers Racing hired Nick Ollila as their Team Director during the break. He has strong ties to Toyota and was the Team Director for Red Bull Racing when they were in NASCAR. Hopefully this change breathes new life in Daniel Suarez. He starts 37th and should be good for 10-12 place differential points Sunday.