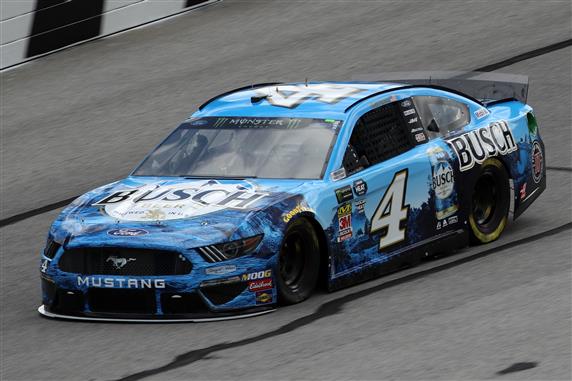 The NASCAR Cup Series will compete at Atlanta Motor Speedway this week and that means the Goodyear tires will be the story of the race. This track eats up the rubber as fast as any track on the circuit. This means managing the tires over a long run will be the key to success, the pit stops will be very important and the racing will be outstanding. The Folds of Honor Quick Trip 500 can be seen Sunday at 3 p.m. ET on Fox.

The Fantasy Live picks were close to having another great race but Chase Elliott and Joey Logano decided to wreck each other with two laps to go. That’s Bristol Baby! The picks are still beating 99.8% of the competition so I guess we cannot complain. We need a solid race at Atlanta though to climb back to the top.

Here are my picks for the Atlanta….

Kevin Harvick: When drivers talk about running fast laps at Atlanta, they often refer to the “Kevin Harvick Line.” He can hook his left-side tires on the apron to help turn the car and make really fast laps. Harvick just won on a track that eats tires (The Real Heroes 500 at Darlington). The No. 4 car will have a good chance to win again Sunday. Harvick has led a series-high 324 laps on the intermediate tracks this season and he has a 5.4 average finishing position. Harvick should be a lock for a top-five finish Sunday.

Chase Elliott: How can you not consider Chase Elliott for your Fantasy NASCAR team this week? The No. 9 car could easily have four to five trips to Victory Lane this season. Elliott consistently has the fastest car in the field and I doubt it will change at his home track. Elliott has finished three of his four races at Atlanta in the top ten. I would not be surprised if they were ringing the “Siren” in Dawsonville after the race.

Brad Keselowski: Brad Keselowski should be arrested for stealing wins this season. He stole a win at Darlington and he did it again at Bristol. Sometimes the fastest cars do not win the race and Keselowski is good at outsmarting the field. This week he should be able to use speed to finish up front. Keselowski has finished 1st, 2nd and 1st in his last three races at Atlanta. His average finishing position at the track since 2014 is 4.4. The No. 2 car will be tough to beat Sunday.

Martin Truex Jr.: Martin Truex Jr. has never won at Atlanta before but he has been knocking on the door. Truex finished second in this race last year and he has only finished outside the top eight at this track one time since 2011. His average finishing position in the last five years is 5.6 at Atlanta. The No. 19 car should have a good chance for a top-five finish Sunday.

Kurt Busch: How did Kurt Busch finish seventh last week? He stunk up the joint the entire race but was able to finish in the top seven for the sixth time in his last seven races in 2020. Busch has been one of the most consistent drivers this season and his consistency at Atlanta is outstanding. Busch has a sixth-place average finishing position at Atlanta in the LAST DECADE! That is awesome. This is by far his best track so we need to get the No. 1 car into our lineups Sunday.

Joey Logano: I only have four allocations left with Joey Logao so I will start him in the Garage Sunday. I am not worried about running out of starts with him because I have a lot of start left with some good drivers who should heat up over the summer (Kyle Busch). Logano has an 8th-place average finishing position on the intermediate tracks this season. He has also led laps in every race. The No. 22 car should be a good insurance policy Sunday.