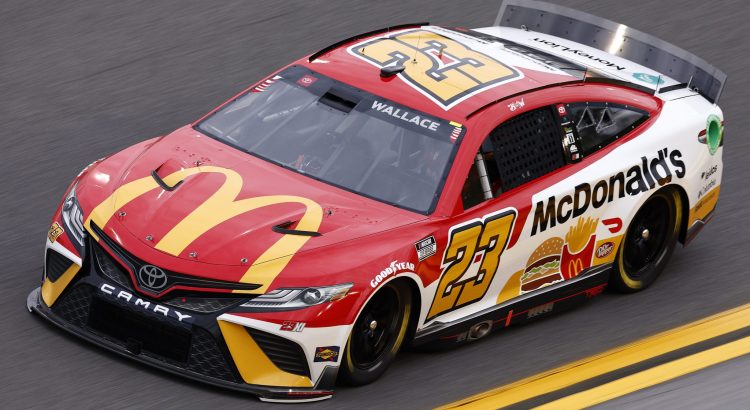 The 2022 NASCAR Cup Series begins Sunday with the 64th running of the Daytona 500. That means it is once again time to dominate the Fantasy Live game on nascar.com. This has been by far my most successful Fantasy NASCAR game. My picks have outscored 99% of the entries every year since 2011. So how do I do it? Everyone uses the wrong strategy for their picks. Here are my strategies and picks for the Daytona 500…

Most people who play Fantasy Live use drivers that you have no business using in your lineup. There are 26 races and five drivers needed per races. That means we need 130 allocations throughout the season (13 drivers). We can get through the three races on the Superspeedways (Daytona and Talladega) without using our top drivers. When we take those races out of the equation, we only need 115 allocations (11.5 Drivers). We can also plan to use Austin Cindric, AJ Allemendinger and Chase Briscoe at the five road course tracks (COTA, Sonoma, Road America, Indianapolis and Watkins Glen). When we eliminate three drivers from the road course races, that leaves us with 100 allocations needed (10 drivers). We can also plan to use Ricky Stenhouse Jr. on the Bristol Dirt Track. Using Stenhouse in that race would leave us with 95 allocations needed to get through the season (or 9.5 drivers).

I cannot stress this enough… We only need to use nine drivers at the non-Superspeedway tracks (and using Austin Cindric, AJ Allemendinger and Chase Briscoe at the road courses and Ricky Stenhouse Jr. on dirt at Bristol). The nine drivers I plan use in my lineups are: Kyle Larson, Chase Elliott, Denny Hamlin, Martin Truex Jr., Kyle Busch, Joey Logano, Ryan Blaney, William Byron and Kevin Harvick. I will also sprinkle in Tyler Reddick, Alex Bowman, Brad Keselowski and Christopher Bell into some race. Your team has a great chance to score well if you stick to that list of drivers throughout the season. There is no need to take a chance with Ross Chastain, Aric Almirola, Bubba Wallace Jr. or other mid-tier drivers at the intermediate or short tracks.

Some people say you can simply draw driver’s names out of hat for your Fantasy Live lineup at Daytona. It is true that this race requires 80% luck and 20% skill to reach the end, but when you break it down by the stats; there are some drivers who stick out.

“In order to finish first, you must first finish.” For this reason I will be looking for drivers who have a history of finishing the races at Daytona. I also want drivers who score a lot of Stage Points. Once a driver earns the Stage Points, they cannot be taken away. So even if he crashes in the last Stage, it will not hurt your lineup as much because he has Stage Points already added to his score.

Here are the best drivers for the race at Daytona… 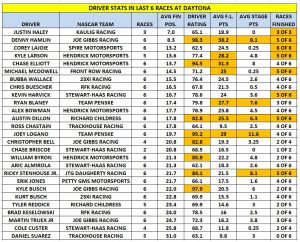 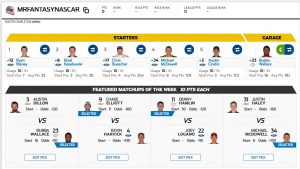 Ryan Blaney (10): I matched up each driver with their best tracks and I have one allocation left over with Blaney. He is my pick to win the Daytona 500 so I will use that extra allocation this week. If NASCAR narrowed to gap between the great teams and the good teams, I should have no problem finding another allocation if I need it. Blaney won the last race at Daytona and I like stacking the Fords in my Fantasy Live lineup.

Brad Keseloski (10): Could this be the year Keselowski gets his first Daytona 500 win? He sure looked good in the Duel Races and I like the fact that Keselowski has been one of the only drivers who was pushing and being pushed in practice. Keselowski is the smartest driver in the Cup Series. If anyone is going to figure out the Next Gen car quickly, it will be Keselowski. He should score a lot of Stage Points and have a good chance to win from the second row Sunday.

Chris Buescher (10): We have to save our allocations with our top drivers this week so why not take a chance with Buescher? He won his Duel Race Thursday and he finished five of his seven races at Daytona in the top-10 between 2017 – 2020. He knows how to get to the end of these races. He said his car handles great and has good speed. He should score well in Fantasy Live in the Daytona 500.

Michael McDowell (10): You almost have to take a chance with the 2021 Daytona 500 Champion and see if McDowell can do it again. McDowell will be one of the highest owned drivers in your league, so if he crashes it will not hurt you much. McDowell has been awesome in the Daytona 500. His last six finishes in the Daytona 500 are 1st, 14th, 5th, 9th, 15th and 15th. He also finished second in his Duel Race Thursday. It would not surprise me if McDowell won again Sunday.

Austin Cindric (10): I want as many Fords as possible in my lineup Sunday because the shape of the front of their car allows them to push easily and the Roush Yates Engines always have speed at Daytona. Cindric is a good at the Superspeedways. He won the Xfinity Series race at Daytona last year and he finished 15th in his first Daytona 500 last year. Cindric finished second in his Duel Race Thursday. He will be right behind Ryan Blaney and Joey Logano Sunday. That is a good place to be on the track and it should allow Cindric to score a lot of Stage Points and have a good chance to finish in the top 10.

Garage Driver: Bubba Wallace Jr. (10): I typically do not like playing Wallace in Fantasy Live, but he has had a lot of success at Daytona. Wallace finished second in the last race at Daytona and he finished second in the 2018 Daytona 500. He is not good at a lot of tracks, but he is actually good at Daytona. I like loading my lineup with Fords but I do not mind having Wallace and his Toyota in the Garage.

* Joey Logano will have to start in the back since his team went to a backup car.