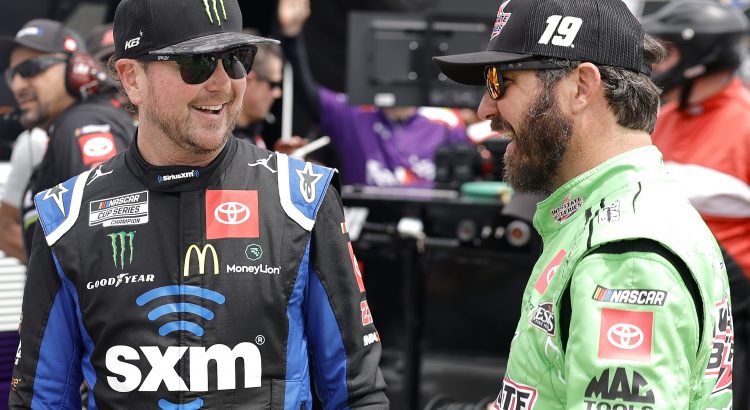 The NASCAR Cup Series will travel to the “Magic Mile” this week for another flat track race. The teams are still collecting data from the Gen-7 ca, but they should have a full notebook to work with this week. The Cup Series has competed at four flat intermediate tracks this year (Phoenix, Richmond, Martinsville and WWT Raceway). The drivers who ran well in those races should be up front at New Hampshire. The Ambetter 301 can be seen Sunday at 3 p.m. ET on USA Network.

The race at the Magic Mile is one of the shortest on the schedule. The race is only scheduled for 301 miles and the Stages will go by quickly. That means there will not be a lot of time for drivers to make their way to the front. Track position is usually important at New Hampshire so I will start many of the drivers who qualified well Saturday.

We can learn a lot from the races on the flat intermediate tracks this year. The Toyotas looked awesome in the last two races (Richmond and WWT Raceway). William Byron dominated the race at Richmond and Ryan Blaney has the best average finishing position in the four races. We also cannot overlook the hot streak Chase Elliott is on right now and how about Ross Chastain? Has the No. 1 car struggled in any races this year? I plan to select many of these drivers for my lineup Sunday.

Here are my picks for the Ambetter 301… 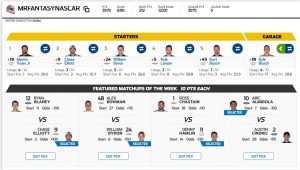 MARTIN TRUEX JR. (4): Truex is going to need a win in order to make the playoffs if the Cup Series continues to add first time winners to Victory Lane. The No. 19 car has been at its best on the flat tracks this year and Truex looks fast again this week. He posted the fifth-fastest speed in practice and won the pole for the race. Truex should lead a lot of laps, score a lot of Stage Points and be one of the highest scoring drivers in the Fantasy Live game Sunday.

CHASE ELLIOTT (3): I would not recommend fading Elliott Sunday. He won two of the last three races and it probably should have been three in a row since he had the best car at Road America but finished second. He is on a hot streak right now so I have to use him at New Hampshire. I have three allocations left with Elliott. I need to save two for the Indianapolis Road Course and Watkins Glen. That gives me one allocation to work with. I will use it Sunday.

WILLIAM BYRON (5): Could this be the bounce-back week for Byron? It has been a long time since he has ran up front, but he has been one of the best drivers on the flat tracks this year. Byron led 122 laps and finished third at Richmond and he led 212 laps and won the race at Martinsville. This week Byron posted the fastest speed in practice and qualified sixth for the race. He also had a practice race since he competed in the Xfinity Series race Saturday. I will take my chances with Byron Sunday.

KYLE LARSON (3): I wasn’t planning on using Larson entering this week and then he went out and posted the fourth fastest speed in practice with the fourth-fastest long-run speed. Larson also qualified eighth for the race, so his car has speed. I then looked at my allocation chart. I have three left with Larson and I have him penciled in for Richmond and Michigan. He hasn’t been great this year on the road courses so I can get through the races at the Indy Road Course and Watkins Glen. I can also get through Pocono and Daytona with Larson. So that leaves one race and one allocation left. It is this week at New Hampshire.

KURT BUSCH (7): This pick was incredibly tough. I had a hard time choosing between Kevin Harvick, Aric Almirola and Kurt Busch. Harvick has been the most consistent since he finished sixth, fifth, first and first in his last four races at New Hampshire. This is a new car and I have bad luck with Harvick so I will fade the No. 4 car. We all know this is the best track for Alrmirola but do we trust him? I don’t, so I will use Busch. The No. 45 car look like trash in practice so the team put the setup they used when Busch finished third at WWT Raceway. The car came to life and Busch qualified third for the race. He finished fifth at Phoenix, sixth at Martinsville and third in St. Louis. He proved he can finish up front on the flat tracks so I will use an allocation with Busch Sunday.

GARAGE DRIVER: KYLE BUSCH (4): One of the most frustrating things about Fantasy NASCAR is having Rowdy in your lineup. We all know he has the talent and the car to win every race, but the dude consistently finds trouble. I am not sure why Busch has not finished inside the top-20 in over a month, because he has had one of the fastest cars in every race. Busch is fast again at New Hampshire. The No. 18 car posted the second-fastest speed in practice, with the fastest long-run speed. Rowdy should be a good insurance policy to have in the Garage Sunday.