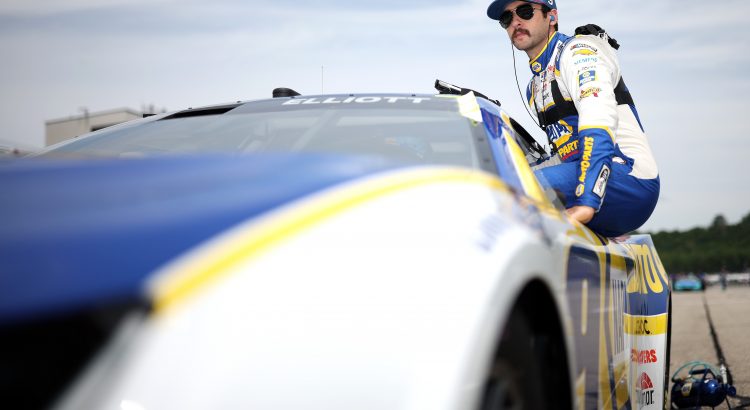 The NASCAR Cup Series will travel to New Hampshire Motor Speedway this week to compete in the Ambetter 301. This race last year was a disaster after the rain fell once the race was started and NASCAR was slow to through the caution flag. Some of the top drivers crashed and too down our DFS lineups only six laps into the race. Hopefully we will have better luck this week. The Ambetter 301 can be seen Sunday at 3 p.m. ET on USA Network.

The Cup Series had their regular practice schedule this week. The teams were broken down into two groups and they had 20 minutes to dial in their cars for the race. New Hampshire is a one-mile, flat oval track. Most of the teams were able to make some long runs in practice. The cars qualified for the race immediately after the practice session. The cars were then impounded for the race Sunday. That means the teams did not have time to work on the cars after practice. The cars that were fast in practice should be fast at the start of the race this week. 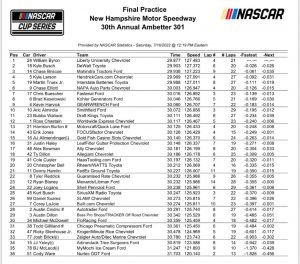 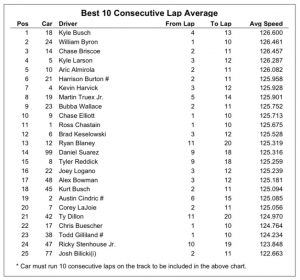 We finally have a race where we have a lot of data to use to handicap which drivers have the best chance to finish up front Sunday. The Cup Series has competed in four flat tracks races this year. Those tracks include the races at Phoenix, Richmond, Martinsville and WWT Raceway. We can learn a lot by looking at which drivers ran well in all four races.

Here are the average DraftKings and FanDuel Points in the four races on flat track races this year…. 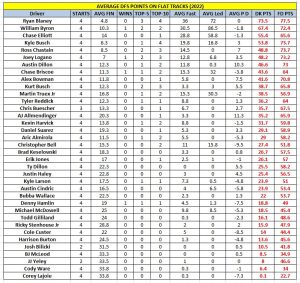 The trend at New Hampshire is for the laps led to be spread out. Last year Kevin Harvick led 66 laps, Ryan Blaney led 64 laps, Brad Keselowski led 53 laps, Chase Elliott led 53 laps, Aric Almirola led 25 laps and Matt DiBenedetto led 20 laps. The Gen-7 car has evened the playing field so I expect the laps led and the fastest laps to be spread out a bit more Sunday. We will still need three of the top four lap leaders in our lineup at the Magic Mile.

Here are the drivers I expect to lead the most laps Sunday: Martin Truex Jr. Chase Elliott, William Byron and Kyle Busch 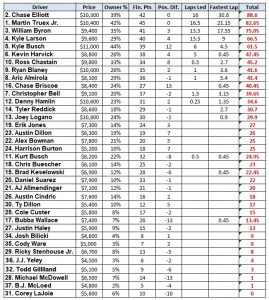 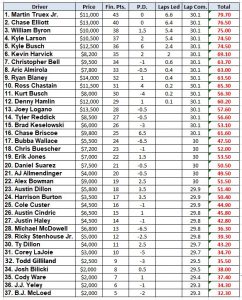 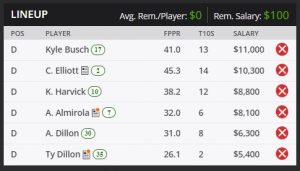 KYLE BUSCH ($11,000): Busch should be a lock for all Cash Contest lineups. Busch posted the second-fastest speed in practice, with the fastest long-run speed. His car got loose in qualifying when Busch hooked his tires on a seem in the track so now the No. 18 (Dewalt Car) will start 17th. Busch has a great chance to score 10+ place differential points with the upside to score some dominator points too.

CHASE ELLIOTT ($10,300): I have $100 left over in this lineup so I can use Martin Truex Jr. or Chase Elliott. Both are great picks but I trust Elliott more than Truex. Elliott has finished 1st, 1st, 4th and 2nd in his last four races. He has been the best driver in the sport for over a month and he posted the fourth-fastest speed in practice. Elliott has a great chance to be one of the top dominators in the race Sunday.

KEVIN HARVICK ($8,900): I usually do not play Harvick in my Cash Contest lineups unless he starts deep in the field. He starts 10th Sunday and he should be able to finish in the top-10. Harvick finished 6th, 5th, 1st and 1st in his last four races at New Hampshire. This is clearly one of his best tracks. Harvick finished sixth at Phoenix and second at Richmond. The No. 4 car has the speed and Harvick has the talent to finish in the top-10 Sunday.

ARIC ALMIROLA ($8,100):  Almirola is another driver who is not in my Cash Contest lineup very often, but New Hampshire is his best track. Almirola won this race last year and his average finishing position in his last four races at the Magic Mile is fifth. Almirola also proved he can finish in the top-10 on the flat tracks when he finished fifth at WWT Raceway last month. It is risky playing Almriola from the seventh starting position, but I trust he can finish in the top-10 at his best track.

TY DILLON ($5,400): What a week it has been for Dillon. He got fired from Richard Petty Motorsports but that does not mean he totally sucks. Dillon starts 35th and he posted the 18th fastest speed in practice. Dillon is not going to compete for a top-10 finished but his average finishing position on the flat tracks this year is 22nd. Dillon will score 35 DK Points if he can finish 22nd Sunday. Anything inside the top-30 from Dillon should be enough to help the Cash Contest will money this week. 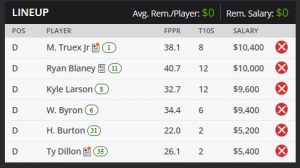 MARTIN TRUEX JR. ($10,400): Track position is very important at New Hampshire and Truex has it. The No. 19 car won the pole and has the No. 1 pit stall. Truex desperately needs a win to secure a spot in the playoffs. Can he completely dominate a race from the pole? Hell yes he can. We have seen Truex do it at many tracks before. Truex led 88 laps at Richmond and 42 laps at WWT Raceway. He should lead roughly 60 laps Sunday and finish in the top-five. That should be enough to help this lineup cash in this week.

RYAN BLANEY ($10,000): Most people had Blaney high on their list of drivers to play at New Hampshire after he finished fourth at Phoenix, seventh at Richmond, fourth at Martinsville and fourth at WWT Raceway. He also led 288 laps in those races, so Blaney has been good on the flat tracks this year. Blaney could have lower ownership than he should have since he posted the 23rd-fastest speed in practice and qualified 11th for the race I will take a chance with Blaney and hope he can find some of that flat track magic Sunday.

KYLE LARSON ($9,600): Larson is another driver who may get overlooked Sunday. I expect most people will play his teams (Chase Elliott or William Byron) or Martin Truex Jr. as a dominator at New Hampshire. I would not be surprised if Larson is one of the dominators this week. Larson has three runner-up finishes at New Hampshire. He posted the fourth-fastest speed in practice with the fourth-fastest long-run speed. I will roll the dice with a low owned Larson Sunday.

WILLIAM BYRON ($9,400): Byron is going to be higher owned than I would like to see, but it is hard to ignore the speed the No. 24 car has and the success Byron has had on the flat tracks this year. Byron led 122 laps and finished third at Richmond. He also led 212 laps and won the race at Martinsville. Byron posted the fastest speed in practice with the second-fastest long-run speed. Byron has a great chance to be one of the dominators at New Hampshire.

HARRISON BURTON ($5,200): Would you play an Eanrhardt at Talladega? Then you should play a Burton at the Magic Mile. Jeff Burton had a habit of destroying the field at New Hampshire. Harrison must have learned something from the old man because he is good too. Burton posted the 13th-fastest speed in practice with the sixth-fastest long-run speed. He was one of the first cars to go out in qualifying and he did not take the best line around the track. As a result, Burton will start 31st Sunday. His car has the speed to move up 10 spots Sunday so I like his upside.

TY DILLON ($5,400): Lame Duck Dillon will be in both of my lineups this week. He does not have to do much to score well in DFS contests. Dillon is the best “punt play” Sunday. 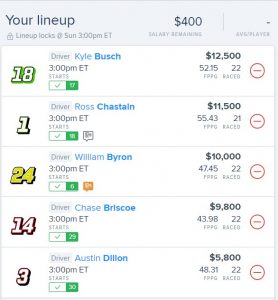 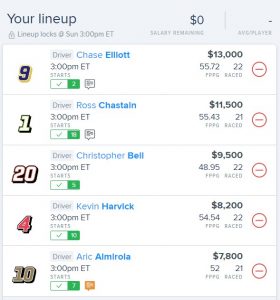