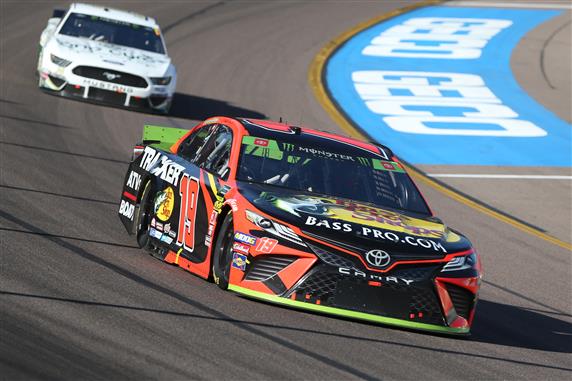 Once again the Fantasy Live game has been my best. The picks have beat 99% of the competition for 10 years in a row. The regular season picks this year beat 99.5 % of the competition, but the playoffs picks are only beating 97.4% of the entries. Still not too bad, but we need a good race at Phoenix to move up in our league standings.

* Fantasy Live does not award Stage points to the four drivers competing for the championship (Joey Logano, Brad Keselowski, Denny Hamlin and Chase Elliott). For that reason, I recommend using non-playoff drivers in your lineups Sunday.

Kyle Busch has been awesome at Phoenix. If a non-playoff is going to win the race Sunday, it may be Rowdy. He has finished 3rd, 2nd, 1st, 1st, 2nd, 7th, 3rd, 2nd 4th and 4th at Phoenix since 2014. That is pretty damn consistent, even when he was in a slump. Also, Busch is the only driver to score Stage points in every Stage at Phoenix since the Cup Series went to this scoring format.

Martin Truex Jr. is not known as the “King of Phoenix” (that is Kevin Harvick’s title), but he has not been too bad. Truex finished 2nd at this track last year, so he knows how to turn fast laps in the desert. Truex was running in the top five with 33 laps to go at Phoenix in March. Aric Almirola spun him into the fence and he finished 32nd. Truex should have another fast car at the track Sunday.

Ryan Blaney has been hit or miss at Phoenix in his career. When he stays out of trouble, he is very good. Blaney finished third in both races at Phoenix last year. He was running in the top-five again in March but Denny Hamlin got loose and spun into Blaney. The No. 12 car hit the wall and finished 37th. Blaney starts up front again Sunday. His car will be fast. He just needs drivers to stop hitting him.

Kurt Busch has been consistent all season. He has scored 19 top-10 finishes. He had a good race at Phoenix in March. Busch started 7th and finished 6th. His average finishing position at Phoenix over the last two seasons is 8th. The No. 1 car probably will not lead any laps, but Busch should run in the top 10, score some Stage points and finish in the top 10 Sunday.

Alex Bowman made a name for himself at Phoenix. Bowman filled in for an injured Dale Earnhardt Jr. in Phoenix in 2016. He started on the pole, led 194 laps and finished 6th. He hasn’t been very good at Phoenix since that race, but this pick is more about how Bowman is running now and not how he ran over the last two seasons. Bowman finished 14th at Phoenix in March. He starts 6th and should be able to finish in the top 10 this week.

Garage Driver: Clint Bowyer will be making his last start as a full-time Cup Series driver Sunday. I will take this chance to use him on my fantasy team once last time before he hangs up his helmet. Bowyer has had a lot of success in Phoenix when he is not chasing Jeff Gordon through the garage area. He finished 5th at Phoenix in March and 8th in this race last year. The No. 14 car should have the speed to run in the top 10 Sunday.