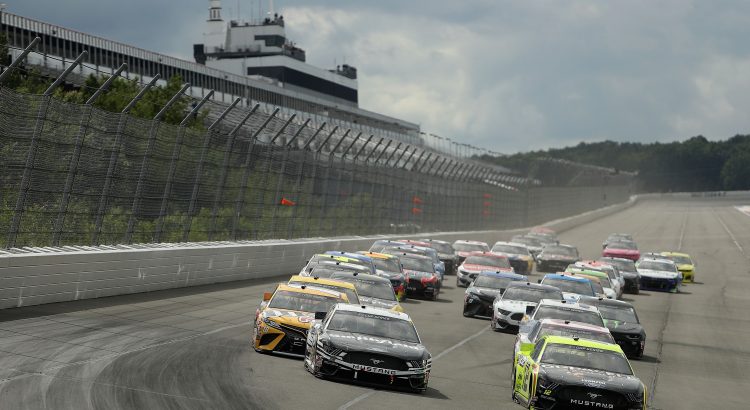 NASCAR will have a double-header of racing at Pocono this weekend. The first Cup Series race is Saturday at 3 p.m. ET and the second race is Sunday at 3:30 p.m. (Both races on NBCSN). The picks in this article are for the Saturday race. The pick for the Sunday race will be posted no later than Sunday morning.

The Fantasy Live picks continue to score well. The picks are now beating 99.2% of the entries. I have been using Kyle Larson a lot and that has a lot to do with our success. I am going to fade the No. 5 car this week at Pocono. Larson is my pick to win the race, but I think his allocations are more valuable at the tracks were the draft does not come into play as much. I would play Larson this week if you have 3 or more allocations with the No. 5 car. You need to save to starts for Atlanta and Michigan. I would use Larson and put Brad Keselowski in the Garage over Aric  Almriola.

Here are my picks for Pocono Organics CBD 325… 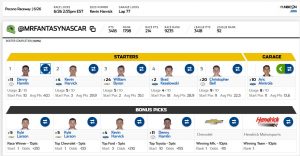 Denny Hamlin (2): Denny Hamlin is the best driver in the field at Pocono. He has 6 wins at the Tricky Triangle and he has finished the last 5 races at the track in the top-10. Hamlin finished 1st and 2nd in the double-header at Pocono last year. He also led 59 laps. Hamlin is looking for his first win in 2021. It could happen Saturday.

Kevin Harvick (5): Kevin Harvick has been just as good as Denny Hamlin at Pocono. Harvick also finished 1st and 2nd in the double-header at Pocono last year. Harvick has finished 7 of his last 9 races at the Tricky Triangle in the top-four. I feel more confident in this pick since Stewart-Hass Racing looked good last week at Nashville. Harvick should have a good chance to finish in the top-five Saturday.

William Byron (5): If Kyle Larson wasn’t so selfish and would share his wins with others, William Byron would be my pick to win Saturday. I think the race is going to come down to battle between the No. 5 and No. 24 cars. Byron has been really good at Pocono in his career. He has 6 starts in the Cup Series at the Tricky Triangle and his average finishing position is 9th. Byron never had the speed he has this year so the results should be better this week. Byron is a top-10 machine. He should easily finish in the top-10 again Saturday.

Brad Keselowski (4): Brad Keselowski has been one of the most consistent driver at Pocono. He has finished 9 of his last 11 races at the Tricky Triangle in the top-10. He had an accident while leading the race in 2018, but if your take away that race, Keselowski would have a 5.2 average finishing position at Pocono since 2014. Keselowski should be a safe pick Saturday.

Christopher Bell (9): Christopher Bell has a good chance to run well Saturday. He started 36th and finished 4th at Pocono last year and that was in a Leavin Family Racing car. He came back the next day and was running 11th when he had a flat tire and hit the wall. Bell should be much better in the No. 20 car for Joe Gibbs Racing. Erik Jones finished 3rd, 38th (flat tire), 2nd, 3rd and 5th in the No. 20 car at Pocono. I think Bell can have similar results.

Garage Driver Aric Almirola (8): ): I will be honest… Picking Aric Almirola this week scares me because this team seems to be cursed this season. The No. 10 team is showing improvements though. Almirola won a round of the All-Star Open and he finished 4th at Nashville. Now he gets to race at one of his best tracks. Almirola finished 3rd and 5th in the two races at Pocono last year. Almirola also led the most laps in the first race last year. Denny Hamlin, Kevin Harvick and Almirola were the only two drivers to finish both races in the top-five. Almirola should be able to finish in the top-10 this week.