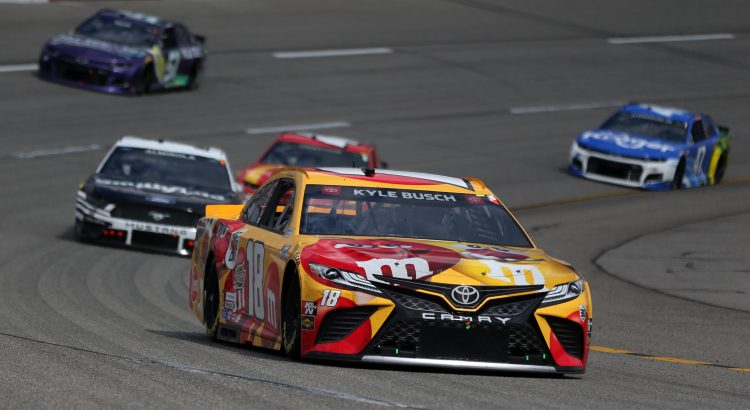 The Fantasy Live picks got off to a rough start with Kyle Busch and William Byron wrecking their cars. My picks got off to a similar start last year and they were still able to finish 112th overall and beat 99.9% of the entries. Now we have to make up the points we lost. It all starts with a Saturday night short track race at Richmond Raceway. The Federated Auto Parts Salute to American Heroes 400 can be seen Saturday evening at 7:30 p.m. ET on NBCSN.

There are 10 races in the NASCAR Cup Series Playoffs. We can use each driver 5 times. That means we need 50 allocations to get us through the 10 playoff races. That means we only need to use 10 drivers throughout the playoffs in out lineups. We can get through the entire schedule by only using Kyle Larson, Denny Hamlin, Martin Truex Jr., Joey Logano, Kyle Busch, Chase Elliott, William Byron, Ryan Blaney and Kevin Harvick. We can sprinkle in Brad Keselowski, Kurt Busch, Christopher Bell and Tyler Reddick into the final position. You do not need to pick any drivers outside this list. Just stick to the top drivers and you should be fine.

Here are my picks for the Federated Auto Parts 400…

Denny Hamlin (4): There is a lot to like about Denny Hamlin Saturday night. He has momentum after his win last week at Darlington. He has the best average finishing position and the best driver rating at the oval tracks where the 750 HP aero package has been used and he dominated the last race at Richmond. Hamlin is always good at his home track. Hamlin is my pick to win again this week.

Martin Truex Jr. (4): Martin Truex Jr. was nearly as good as Denny Hamlin at Richmond in April. Truex started on the pole, finished 2nd in both Stages, led 107 laps and finished 5th. He may have won the race if he did not get a late race speeding penalty. Truex has finished 5th, 2nd, 1st, 1st and 3rd in his last 4 races at Richmond. He should be a lock for another top-five finish Saturday night.

Joey Logano (4): Joey Logano was also almost as good as Denny Hamlin at Richmond in April. The No. 22 car started 5th, finished 3rd in both Stages, led 49 laps and finished 3rd. Logano has been the second-best driver (behind Denny Hamlin) in the oval races where the 750 HP aero package has been used this year. Logano has finished his last two races at Richmond in 3rd place and he is averaging 15.5 Stage points per race. Logano should compete with the Joe Gibbs Racing cars for the win Saturday night.

Brad Keselowski (5): Brad Keselowski won this race last year. I doubt he will win this week, but he should be very good. Keselowski has a 6.5 average finishing position in his last four races at Richmond. He has also been good in the short, flat track races where the 750 HP aero package has been used this year. Keselowski finished 4th at Phoenix and 3rd at New Hampshire. He should score a lot of Stage points and finish in the top-10 Saturday night.

Kevin Harvick (5): Kevin Harvick has been a lot better in the races where the 750 HP aero package has been used this year. I probably should have used the No. 4 car in my lineup last week but I wanted to see what Harvick had for the playoffs. He finished 5th at Darlington and he should be good again this week. His 24th place finish at Richmond in April is misleading. Harvick ran over some debris with 20-laps left in the race. It caused him to get a flat tire and hit the wall. Harvick was running 7th at the time.

Christopher Bell (5): I thought about using Alex Bowman as my Garage driver this week since he won the April race at Richmond but it has been a long time since Bowman had a good race. Instead, I will add another Joe Gibbs Racing car to my lineup. Christopher Bell started 8th at Richmond in April. He finished 6th in Stage 1, 9th in Stage 2 and finished 4th in the race. I expect a similar race from Bell Saturday night.