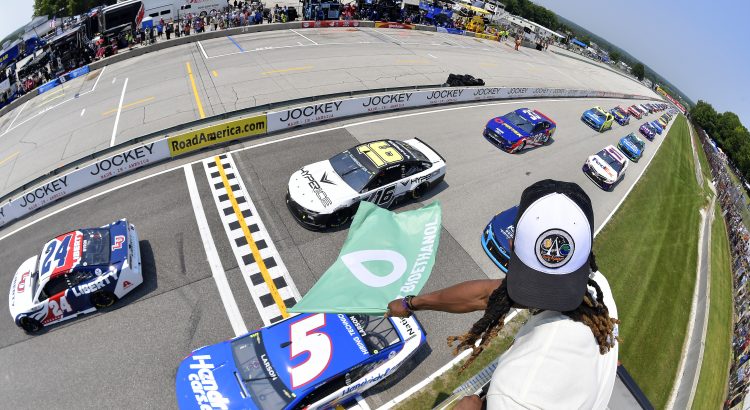 The NASCAR Cup Series will travel to Elkhart Lake, Wisconsin this weekend for another road course race at Road America. The fans Wisconsin waited 65 years for the Cup Series to return to their track and they sure showed their appreciation. The fans packed the track and had a huge 4th of July celebration. Too bad the racing was not great. That should change this year with the Gen-7 car and its independent rear suspension and larger brake package. This car is perfect for road course racing so I expect a lot more passing than what we had at Road America last year. The Kwik Trip 250 can be seen Sunday at 3 p.m. ET on USA Network. (The next four races will be on USA)

The strategy for the road courses usually is not very difficult. There are a handful of drivers who have dominated these races in the past. That has not been the case this year. Many of the drivers who have run well in these races before (Martin Truex Jr., Kyle Busch, Denny Hamlin, Kyle Larson and AJ Allmendinger to name a few…) have not had any success in the two road course races this year (COTA and Sonoma).

So what do we do? Do we fade the drivers listed above who have been to Victory Lane many times at the road courses or do we give them another chance. Most of those drivers are very good at other tracks so I will save some of my allocations with those drivers for other tracks.

Now the question is… What do we do with AJ Allmendinger? We all know he is going to be one of the fastest drivers in practice. We all know he is going to qualify up front. We also know he will run well in the race. But will Allmedinger finish the race? That has been a problem for him. Allmedinger has finished 19th, 33rd, 39th, 1st and 29th in his last five road courses races. I am going to fade Allmendinger and take a chance with some safer drivers.

Here are my picks for the Kwik Trip 250… 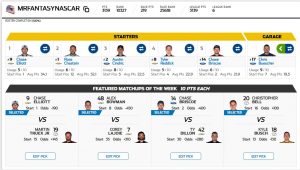 CHASE ELLIOTT (5): I am in real good shape with allocations for the No. 9 car. I have five left and I will burn them at the three road courses (Road America, Indy Road Course and Watkins Glen). That leaves two more to use at the flat intermediate tracks (New Hampshire and Richmond). Elliott is the “free square” this week. He won at Road America last year and he starts on the pole Sunday. Elliott should score a lot of Stage Points and have a great chance to win Sunday.

ROSS CHASTAIN (6): I have six allocations with Chastain left with only nine races left. I know I am not using Chastain at Daytona so he will be a popular driver in my lineups as we finish out the Fantasy Live regular season. Chastain has been the best driver on the road course this year. He won at COTA and the No. 1 car finished seventh at Sonoma. Chastain also finished seventh at Road America last year. He had brake problems in practice but they got the issue fixed. Chastain was third-fastest in practice and he should be fast in the race.

AUSTIN CINDRIC (8): There are only four drivers who have finished both road course races in the top-10 this year (Chase Elliott, Ross Chastain, Ryan Blaney and Austin Cindric). These drivers have been the safest picks this year and most of these drivers will find their way into my lineup. Cindric finished fifth at Sonoma and eighth at COTA. He won the Xfinity Series race at Road America in 2020 so he knows his way around this track. I have plenty of allocations left with Cindric so I will use one this week.

TYLER REDDICK (5): Reddick is not the first name that comes to mind when people think of road course racing but he has been pretty good. Reddick finished fifth earlier this year at COTA and he finished eighth at Road America last year. The secret to his success has been qualifying. When Reddick qualifies up front, he does a good job at staying up front. He posted the second-fastest speed in practice and Reddick qualified fourth for the race Sunday. Reddick should score a lot of Stage Points and finish in the top-10 at Road America.

CHASE BRISCOE (6): Briscoe had the fastest car on the track Saturday. He posted the fastest speed in practice and qualified second for the race. Briscoe said after qualifying, “I should have won the pole. I left a tenth out on the track. I know I have the best car.” Briscoe is a good road course racer and he has the track position to score a lot of Stage Points and finish up front Sunday.

GARAGE DRIVER: CHRIS BUESCHER (9): I was planning on using AJ Allmendinger in this spot but he hated his car in practice and Buescher loved his car. RFK Racing owner, Brad Keselowski said before practice on Sirius XM NASCAR Radio, “We found a setup that worked well in practice at Sonoma. It allowed Chris Buescher to finish second. We brought the same setup this week and we are hoping it works again.” It looks like it did. Buescher posted the sixth-fastest speed in practice and qualified seventh in the race. If Buescher has the speed he had in California, he could win the race Sunday.

ALEX BOWMAN vs. COREY LAJOIE (My pick is ALEX BOWMAN)