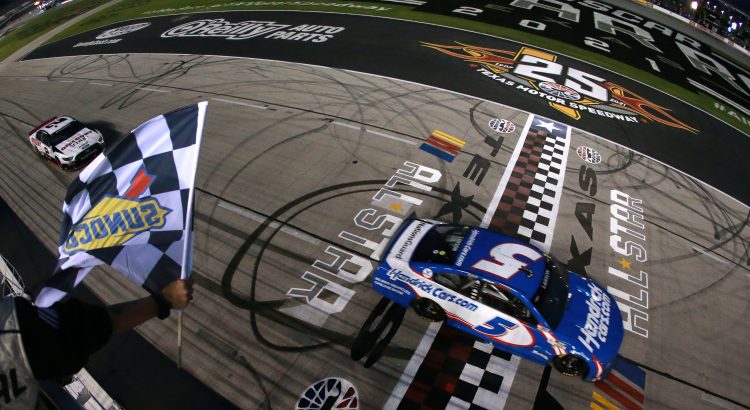 The NASCAR Cup Series will travel back to Texas Motor Speedway this week to kickoff the Round of Eight in the 2021 playoffs. The Cup Series last competed at Texas in June in the All-Star Race. That race was only 100 laps long. The Autotrader EchoPark Automotive 500 will have 334 laps. That is a long race, but it also means we have some long Stages and 210 laps to decide which driver to put in the Garage. It should be fun to see who will be the first driver to secure a spot in the championship race at Phoenix (If a playoff driver wins Sunday).

Here are my picks for the Autotrader EchoPark Automotive 500…

Kyle Larson (2): Kyle Larson is the best pick in the field Sunday. Larson won the All-Star Race at Texas in June and he has led 708 laps more on the intermediate tracks than any driver in the field. Larson is also averaging 12 Stage points per race on the intermediate tracks this year. The No. 5 car should dominate the race Sunday and have a great chance to secure earn a spot in Victory Lane. I have two allocations left with Larson. I will use one of them at Texas.

Chase Elliott (3): Chase Elliott is the second-best pick for Texas behind Kyle Larson. Elliott finished third in the All-Star Race at Texas in June. He had the second-fastest Green Flag Speed (behind Kyle Larson) and the best Driver Rating (128.3) in the race. Elliott just finished second at Las Vegas last month. He should have a good chance to win Sunday. Elliott will have a wait another mother before he has a “Merry Off-Season and a Happy Christmas.”

Ryan Blaney (2): Ryan Blaney will be a good pick at Texas. Blaney is always good on the 1.5-mile tracks. He won at Atlanta and he finished fifth in the last two races on the 1.5-mile tracks (Atlanta and Las Vegas). Blaney dominated the race at Texas last year. He won both Stages and led a race-high 150 laps. I am hoping he can have similar success Sunday. Blaney should be a safe pick from the fourth starting position.

Brad Keselowski (3): Brad Keselowski is the last driver to qualify in the Round of Eight. He starts off this round 16 points behind his teammate (Ryan Blaney) for the cut-off for the final four at Phoenix. That really does not matter though because drivers know their best chance to earn a spot in the final four is to win a race. The race at Texas is Keselowski’s best chance. Keselowski finished second in the All-Star race at Texas in June and he finished second at Las Vegas and third at Kansas (two similar tracks to Texas). Keselowski will be a good pick Sunday.

Denny Hamlin (3):  I had to decide which Joe Gibbs Racing driver I wanted in the Garage this week. Martin Truex Jr. has good track history at Texas but it is hard to ignore the hot-streak that Denny Hamlin is on right now. Hamlin has finished every race in the playoffs in the top 10 and he has scored the most Stage points. He won the last two races on the intermediate tracks (Las Vegas and Darlington) so I will have him in the Garage just in case the No. 11 car dominates the race Sunday.