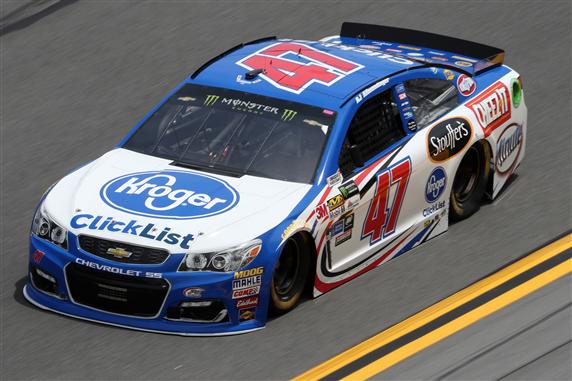 The Monster Energy NASCAR Cup Series travels to Sonoma, California this week for the Toyota / Save Mart 350. The race can be seen Sunday at 3 p.m. ET on Fox Sports 1. Be sure to test your knowledge of NASCAR by competing in the Fantasy Live game on nascar.com.

This will be the first trip to a road course for the Monster Energy NASCAR Cup Series this season. Sonoma was the first track I thought of when NASCAR announced the new Stage format. Strategy always plays a significant part in determining who wins this race. Now that there will be Stage points awarded after laps 25 and 50, the strategy just became more difficult to predict.

Knowing which drivers will short pit, save fuel or gamble with tires is impossible for anyone to predict. My strategy this week is to simply pick the drivers I think can finish up front, lead laps and score Stage points Sunday. There are only 110 laps in the race and 110 bonus points for leading laps and fastest laps in the race. There should be at least three to four dominators at Sonoma so focusing on laps led will not pay off. Pick the drivers you think will run the best and do not worry so much about leading laps and position differential points this week (unless some of the big names drivers have problems in qualifying and start in the back).

Martin Truex Jr. ($28.00) has been fast at every track this season and the No. 78 car will not slow down on the road course. Truex is a previous race winner at Sonoma (2013) and it would not surprise me if he won again. Truex qualified third and finished fifth in this race last year. I would recommend holding onto Truex if you have him at a discounted price. Wait and see how the No. 78 performs in practice and where Truex qualifies before selling him if you have him at the price of $28.

Kevin Harvick ($27.50) has never won a race at Sonoma he has had a lot of success in his home state. Harvick has finished the last two races at the track in the top six. Stewart-Haas Racing has run well on the road courses in the past. Three of their cars will have a good chance to finish in the top five Sunday (Kurt Busch, Clint Bowyer and Kevin Harvick). This is a crew chief’s race and Rodney Childers will come up with a strategy to get Harvick to the front.

Joey Logano ($26.75) is starting to climb out of the slump he was having. Logano finished third last week at Michigan and that momentum should carry onto Sonoma. The No. 22 car has been one of the most reliable cars at the road course. Logano has an average finishing position of 8.5 in the last six races at the track. He will have a good chance to finish up front Sunday.

Kyle Busch ($27.25) is still looking for his first win of the 2017 season. He is my pick to win Sunday. Drivers must be willing to drive aggressively and move people out of the way in order to get to the front at Sonoma. It is no secret Busch is frustrated with his performance this year. The No. 18 car will either be the fastest on the track or Busch will move drivers to get to the front. One way or another Busch will ensure he has a good chance to win Sunday.

Clint Bowyer ($22.50) is a great pick this week. He will be in the car that won this race last year with the crew chief that used the winning strategy. Bowyer has been to Victory Lane at Sonoma before (2012) and it would not surprise me if he got the job done Sunday. He price makes him a good play because Fantasy NASCAR teams can use four strong drivers with Bowyer in their lineup (example: Joey Logano, Clint Bowyer, Kurt Busch, AJ Allmendinger).

Ryan Newman ($20.50) is not the first name that comes to mind when the series competes at a road course but his stats are pretty good. Newman has an average finishing position of 9.3 at Sonoma since he joined Richard Childress Racing in 2014. Making a pass at Sonoma is difficult and passing Newman is nearly impossible. The chances of Newman winning the race this week are slim, but the chances of the No. 31 car finishing in the top 10 are high. Newman is a good value pick this week.

AJ Allmendinger ($15.00) is the best road course driver in the sport. If he had decent equipment Allmendinger may never lose a race at Sonoma or Watkins Glen. The problem is the JTG Daugherty Racing often provides a fast car that does not last the race. Allmendinger has qualified on the front row and led laps in every race with the team but his average finishing position is 29.3. Sooner or later this team will put it all together and Allmendinger will dominate this race. It could happen Sunday.

Michael McDowell ($10.25) has been running well this season and he is a good road course driver. His background is in racing the Rolex Grand-Am Sports Car Series. The No. 95 car has had mechanical problems the last two races at Sonoma but the team seems to have a closer alliance with Richard Childress Racing this season. I expect McDowell to run well Sunday.

Cole Whitt ($6.25) is the best cheap driver for your team this week. Whitt is not great on the road courses but he can hold his own. He has finished higher than where he qualified in every race on the road course so he should be good for position differential points. In 2015 Whitt qualified 29th and finished 22nd. He will be an excellent value pick if Whitt has a repeat performance of 2015.

Here are my pre-qualifying picks for the Toyota / Save Mart 350: