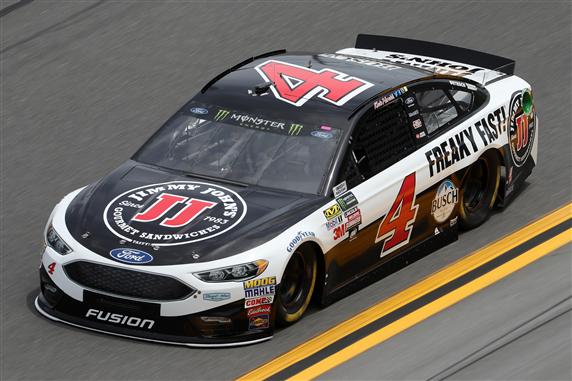 The Monster Energy NASCAR Cup Series will travel to Forth Worth, Texas this week for the O’Reilly Auto Parts 500. The race can be seen Sunday at 1 p.m. ET on Fox. Be sure to test your knowledge of NASCAR by competing in the Fantasy Live game on nascar.com.

This is not going to be an ordinary race at a 1.5-mile track. Everything is bigger in Texas and that includes the length of the race. The O’Reilly Auto Parts 500 is 501 miles and 334 laps. The 67 extra laps from a normal race at an intermediate track means that it will be important to find the dominate drivers this week. There will be 334 bonus points available for leading laps and fastest laps. Fantasy teams must score as many of these points as possible Sunday.

Texas was resurfaced and reconfigured over the offseason. The banking was changed from 24 degrees to 20 degrees and the corners were widened. The track is now similar to Kentucky and for that reason I will use the race results from the newly resurfaced track at Kentucky last year.

I will also use the results from the three races on intermediate tracks this season (Atlanta, Las Vegas and California).

Joey Logano ($28.00) will have a great chance to get his first win this week. No driver has run any laps on the repaved track at Texas. Logano will compete in the Xfinity Series race Saturday and the extra time on the track should help him in the race Sunday. Logano ran well last year at Kentucky and he has run well this year on the intermediate tracks. He is worth his high price this week.

Kyle Larson ($27.50) has not been great at Texas but this is a new track and a new season. No driver has benefitted more from the aerodynamics changes to the cars than Larson. The fastest way around repaved tracks is usually at the top. Larson loves the top of the track more than any other driver. He won at California and I would not be surprised to see Larson back in Victory Lane Sunday.

Brad Keselowski ($27.50) has been on fire this season. He already has two wins in the first six races. Keselowski has not finished outside the top five since the Daytona 500. He will have his crew chief back this week so I expect the team to have a fast car this weekend. Keselowski won the race at Kentucky last year on a repaved track using this aerodynamics package. He is my pick to win Sunday.

Martin Truex Jr. ($27.25) has been the best driver on the 1.5-mile tracks since the Cup Series raced at Texas last spring. When the No. 78 team is dialed in they usually dominate the race. Truex will be one of the drivers to keep an eye on this weekend in practice. He must be on your team if Truex qualifies up front and has a lot of speed in practice. He could easily lead 60% of the laps this week.

Kevin Harvick ($26.75) is at his cheapest price in two years. This team has had fast cars and horrible luck. Sooner or later Harvick is going to start running like Kevin Harvick. That could be this weekend. Harvick will also benefit from running in the Xfinity Series race Saturday. This team has a history of running well on the 1.5-mile tracks and they usually do well on repaved tracks. I will probably own some shares of Harvick at a discounted price Sunday.

Ryan Newman ($18.50) has been one of the better options under $20. He is not going to be a dominator in any race, but if drivers like Kevin Harvick and Jimmie Johnson snap out of their slump, it may be possible to fit Newman on your team as a fourth driver (example… Hamlin, Harvick, Johnson, Newman, Hill). Newman has run well in the intermediate track races this season. If he did not have alternator problems at Atlanta he would have finished well in all of these races too.

Clint Bowyer ($18.00) is one of the drivers I have mixed emotions about this season. I am happy that he is running well but I am upset that I sold him two weeks ago. I really wish I still had Bowyer at $15. His price is starting to enter a range where it is going to be difficult to fit him on your team. I expect the No. 14 team to run well this week. Bowyer will not lead many laps but he should finish in the top 10.

Aric Almirola ($13.00) has been one of the best cheap options in the game this season. The No. 43 team usually qualifies poorly and then finds some speed in the weekend practices. That is the perfect setup for a cheap driver in Fantasy Live. Almirola has scored the 14th-most points in the game on the intermediate tracks. His price is the 26th highest, so he has a lot of value. I will either use Ty Dillon or Almirola as my fourth driver this week.

Cole Whitt ($5.25) was awesome last week for the price. He qualified 31st and finished 21st at Martinsville. He actually ran near the top 15 for most of the race. As a reward Fantasy Lived dropped his price 25 cents. That makes no sense at all. If he shows any speed in practice this weekend I will make sure he is my fifth driver for my team.

Here are my pre-qualifying picks for the O’Reilly Auto Part 500: