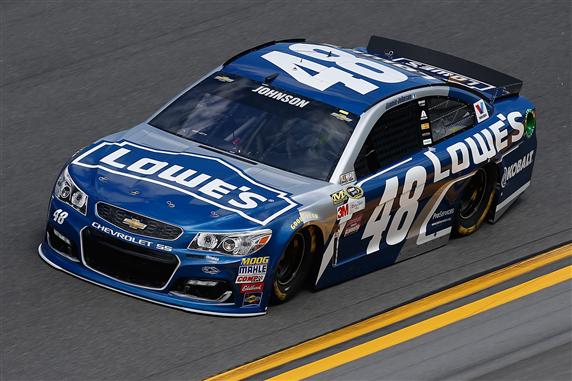 The Monster Energy NASCAR Cup Series travels to Dover, Delaware this week for the AAA 400 Drive for Autism. The race can be seen Sunday at 1 p.m. ET on Fox Sports 1. Be sure to test your knowledge of NASCAR by competing in the Fox Sports Fantasy Auto Racing game.

Dover International Speedway is also known as the Monster Mile. It is a demanding 1-mile concrete track that challenges the best drivers. The high-banked corners produces a lot of speed and many of the drivers say their car feels like it is going to go airborne when they exit the corners onto the straightaway. It is a rhythm track that drivers either know how to driver or they just get in the way.

NASCAR consistently tries to improve the racing but so far their efforts have failed. The cars are so similar that the only thing that matters is clean air. Passing for the lead has become instinct. Until NASCAR reduces the inspection process and allows teams to gain an advantage over their competitors, the best car for your fantasy team will be the ones that start upfront.

Jimmie Johnson ($11,300) is the master when it comes to conquering the Monster Mile. Johnson has a series-high 10 wins, a series-best 9.53 average finishing position, series-best 118.3 driver rating and has lead 3,093 at Dover. Few drivers in NASCAR history can match Johnson’s stats at Dover. He has not been to Victory Lane at the track since 2015; which is only four races. That is a long drought for the No. 48 team. The seven time NASCAR champion should score his third win of the season this week at Dover.

Kyle Larson ($12,800) has been one of the best drivers in the Monster Energy NASCAR Cup Series this year and his stats at Dover suggest he may find Victory Lane Sunday. Larson has finished five of his six races at the Monster Mile in the top 11. Last year he qualified 23rd and finish second in this race. His price is high, but Larson is one of the best selections for your team Sunday.

Kevin Harvick ($10,800) has been the best driver at Dover since 2014 but his results are horrible. Harvick has the second-best driver rating (111.9) and has led 786 laps in the last five races at the track. The No. 4 team has dominated the races but when the checkered-flag is waved, Harvick is nowhere to be found. His bad luck at the track must turn around sooner or later. Harvick will have a fast car Sunday. The question is whether or not it will be upfront at the end of the race. I think Harvick will have better luck this week.

Martin Truex Jr. ($10,700) considers Dover his home track and he loves to perform well in front of his family and friends. The Mayetta, New Jersey native has a series-high 120.1 driver rating and a 6.75 average finishing position in the last four races at the track. Truex dominated the race at Dover in the Chase last year. He qualified second and led 187 laps on his way to Victory Lane. The No. 78 car will be the biggest threat to Jimmie Johnson this week.

Kyle Busch ($10,100) will be a factor in the race Sunday. After a slow start to the 2017 season, Joe Gibbs Racing is starting to come to life. Busch grew up racing on the high-banked concrete track in Las Vegas. He really knows how to make fast laps at the Monster Mile. Last year he qualified third, led 102 laps and finished second at Dover. I would not be surprised to see the No. 18 car in Victory Lane Sunday.

Matt Kenseth ($9,000) got off to a slow start this season but he is starting to heat up. He finished 12th at Kansas and fourth last week at Charlotte. Kenseth won this race last year. It was his third consecutive finish in the top seven at the Monster Mile. Joe Gibbs Racing is still looking for their first win in 2017. Kenseth should be up front when the checkered flag is waved Sunday.

Ricky Stenhouse Jr. ($8,000) is having his best season in the Monster Energy NASCAR Cup Series. He has finished nine of the twelve races in the top 15. Stenhouse has been a consistent driver at Dover. His average finishing position at the track is 19.1. The No. 17 car has a lot more speed this season so fantasy teams should expect Stenhouse to run in the top 15 Sunday. Stenhouse is a good fourth driver for your team this week.

Daniel Suarez ($7,000) continues to improve in the Monster Energy NASCAR Cup Series. Most experts expected Suarez to struggle in the first half of the season (including me). He has three top-10 finishes and has been competitive in all of the races. Suarez has never competed in a Cup Series race at Dover but he has four starts in the Xfinity Series at the track on his resume. Suarez has finished three of the four in the top 10, including a trip to Victory Lane last year.

Ryan Blaney ($7,000) is one of the best value picks in the game right now. The No. 21 Wood Brothers Ford has consistently been one of the fastest cars on the track. That should not change this week. Blaney has two career starts in the Monster Energy NASCAR Cup Series at Dover. He finished his first race in the top 10, but was involved in a wreck in his second race. Blaney has the talent and the car to run up front this week. He is definitely a driver you want to consider Sunday.

Erik Jones ($6,000) has never competed in a Monster Energy NASCAR Cup Series race at Dover but he has three races in the Xfinity Series on his resume. Jones has one win and two finishes in the top 10 in the lower series. Furniture Row Racing knows how to bring fast cars to the Monster Mile. Jones’ teammate (Martin Truex Jr.) is always one of the drivers to beat. I expect the No. 77 car to be just as fast Sunday.

Here are my pre-qualifying picks for the AAA 440 Drive for Autism: