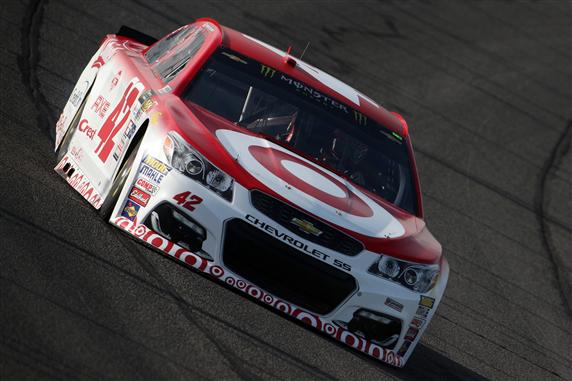 The Monster Energy NASCAR Cup Series travels to Dover, Delaware this week for the AAA 400 Drive for Autism. The race can be seen Sunday at 1 p.m. ET on Fox Sports 1. Be sure to test your fantasy NASCAR skills in the Yahoo Fantasy Auto Racing game.

So what is Dover International Speedway? Some say it is a short track. Others consider it a 1-mile intermediate track. I put the Monster Mile in a category of steep tracks (tracks with high banking). Usually what happens at Bristol translates into success at Dover. The three tracks I put in the steep track category include Bristol, Dover and Darlington.

Qualifying will be important this week because track position will be important. As much as NASCAR has tried to improve the racing, it just has not worked out. I blame the inability to pass the leader on NASCAR’s strict inspection policy. When the cars are measured to the 1000th of an inch it is hard for any team to gain an advantage. When NASCAR loosens their laser inspection procedures, teams will have no problem making it onto the track for qualifying and the product on the track will improve. This concludes my editorial for the week. Now onto the picks…

Most of the good choices in the race this week come from Group A. Eight of the top-10 driver ratings at Dover come from drivers from this group (Chase Elliott and Kurt Busch are the only Group B drivers in the top 10). It will be hard to make a bad choice from this group, but four drivers stand out above the rest.

Jimmie Johnson must be on all teams. Few drivers in NASCAR history have dominated a track like Johnson does at the Monster Mile. Martin Truex Jr. calls Dover his home track. The No. 78 car has had the best results the last two seasons at Dover. Kevin Harvick has been the most dominant driver but has had the worst luck at the Monster Mile. If his luck turns around the No. 4 car could be in Victory lane Sunday. Kyle Busch grew up racing on high banked oval tracks. He is starting to heat up and it would not surprise me if Rowdy was taking a bow in Victory Lane Sunday.

Johnson is the master when it comes to conquering the Monster Mile. Johnson has a series-high 10 wins, a series-best 9.53 average finishing position, series-best 118.3 driver rating and has lead 3,093 at Dover. He has not been to Victory Lane at the track since 2015 and that is a long time for the No. 48 team.

Usually the No. 48 team has a win and a spot in the Playoffs secured when the series visits Dover. The team goes into test mode during this race and it is hard to tell how hard they actually run because Johnson is usually better at the track when a championship is on the line. The team needs points for the playoffs so I expect the No. 48 car to show up this weekend ready to dominate the field.

The Mayetta, New Jersey native has a series-high 120.1 driver rating and a 6.75 average finishing position in the last four races at the track. Truex dominated the race at Dover in the Chase last year. He qualified second and led 187 laps on his way to Victory Lane. The No. 78 car will be the biggest threat to Jimmie Johnson this week.

Once again Chase Elliott and Kyle Larson are the best choices in Group B. Fantasy teams need to conserve their allocations with the two drivers but it is tough to leave them off your team. I will select them this week and hope my other two drivers qualify up front and post fast laps in practice so I can leave to two star drivers on my bench.

So the question becomes which drivers to pair with Elliott and Larson? Clint Bowyer and Kurt Busch are two veteran drivers who have performed well at this track. Jamie McMurray has been the second-best driver this season in Group B (behind his teammate Kyle Larson). The No. 1 car should run well but I am running low on allocations with McMurray. Kasey Kahne and Ryan Newman have been inconsistent this season. They both have a history of running well at the Monster Mile. If you are feeling lucky this week, these two drivers are for you.

Elliott is in a slump right now but most of his problems have not been his fault. I am willing to gamble that Elliott has a bounce back race at Dover.

Elliott does not have much experience in the Monster Energy NASCAR Cup Series at Dover, but his two races at the track have been outstanding. Elliott qualified 13th and finished third in the spring race and backed it up with another third place finish in the fall race at Dover. He is still looking for his first win in the Cup Series and it could come at the Monster Mile.

Larson has been one of the best drivers in the Monster Energy NASCAR Cup Series this year and his stats at Dover suggest he may find Victory Lane Sunday. Larson has finished five of his six races at the Monster Mile in the top 11. Last year he qualified 23rd and finish second in this race. His price is high, but Larson is one of the best selections for your team Sunday.

Dover is Bowyer’s third-best track. Even when he was driving for HScott Motorsports he was able to run well. Last year Bowyer started 32nd and finished 12th in a car that was nowhere near as fast as the car he will have this week. Bowyer finished second at Bristol this season the two tracks are similar in surface and banking. If Bowyer is going to win a race this season it should happen Sunday at the Monster Mile.

Blaney is having a terrific sophomore season, but he ran into some bad luck last week. He spun the tires in the pits and broke an axle. Blaney was running well at the time and I expect him to pick up where he left off. The No. 21 car has had a lot of speed no matter what the track size is. Blaney finished eighth in this race last year and he should be able to duplicate that finish Sunday.

We are finally coming up on some races where I plan to save Erik Jones and Daniel Suarez. I like to use these drivers on the 1.5-mile tracks so I plan to save their allocations at Dover, Pocono, Sonoma, Daytona and Indianapolis. That will give me plenty of chances to use them down the stretch.

Richard Petty Motorsports has not announced who will be behind the wheel of the No. 43 at Dover. I expect it to be Regan Smith again. If it is, he will get the spot on my team. If the team decides to go with a driver from Group A or Group B (Carl Edwards or Greg Biffle) I will replace Smith with Ty Dillon.

Smith had horrible results at Dover while driving for Tommy Baldwin Racing. That had more to do with his car than his talent. Smith was decent at the Monster Mile while driving for Furniture Row Racing. He finished most of the races in the top 20. Aric Almirola finished 22nd at Bristol earlier this season. I expect similar results from Smith this week.

Jones is on my team this week for qualifying points. He won the pole for the Xfinity Series race at Dover last year and he should have the same setup in the car as his teammate (Martin Truex Jr.). The only way I will use Jones this week is if he starts on the front row. This is a hard track for a rookie to have success at so I plan to leave him on my bench this week.