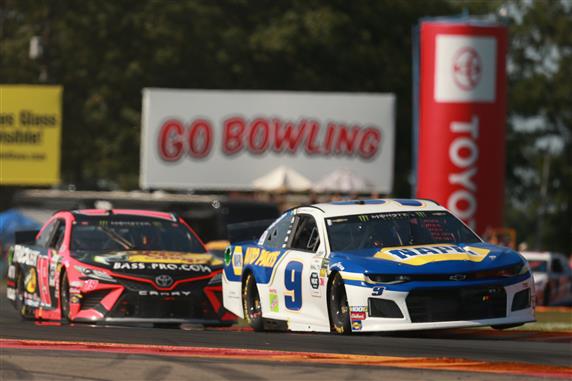 The Cup Series drivers had their cars go through tech inspection this morning and it was no surprise that some teams failed. Chase Elliott’s car failed so crew chief Alan Gustafson will be suspended from today’s race and the team will be docked 10 points. Christopher Bell also had his car fail. Crew chief Adam Stevens has been suspended and the No. 20 team was docked 10 points.

I am still using Chase Elliott. I am more worried about the loss of Alan Gustafson than I am worried the No. 9 car starting from the back today. I am sure Hendrick Motorsports has a fuel strategy already planned out for this race, so Elliott should be fine. I expect the No. 9 car to be in the top-10 before the end of Stage 1.

I will still use Christopher Bell in the Fantasy Live game since we have a Garage pick to replace the No. 20 car if Bell has a tough time making it back to the top-10. I think he will be OK though.

So no changes to the Fantasy Live lineup.

I am still using Chase Elliott in the Driver Group Game. He is still the best pick in the field and the No. 9 team should have plenty of chances to use pit strategy to get Elliott to the front.

I am running low on allocations with Christopher Bell and I do not want to use one of them when he starts from the back. For that reason I am switching out Bell for Tyler Reddick.

Tyler Reddick has finished 9th at COTA and 8th at Road America. His average finishing position on Road Courses is slightly better than Christopher Bell’s. I have 8 allocations left with Reddick, so I will use one today.

I have been saving Chase Elliott for this race because Watkins Glen is his best track. I am not going to try and be cute and take him out of my lineup. I will still use the No. 9 car today.

I was all in with Chase Elliott today and I still will have him in 70% of my lineups. I will play a few lineups without Elliott today just in case he gets caught up in a wreck on his way to the front. Here is a non-Elliott lineup I will be playing today… 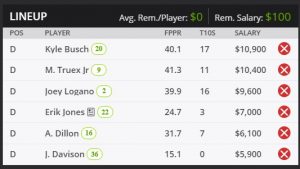