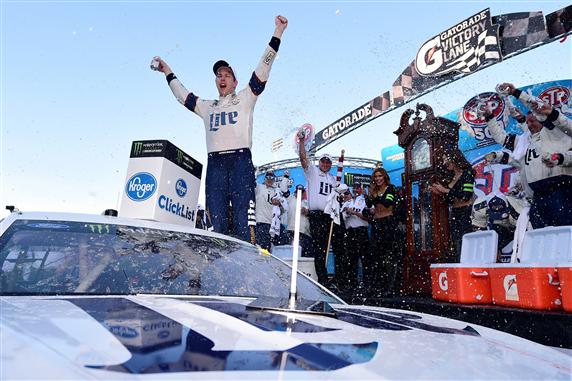 The Monster Energy NASCAR Cup Series travels to Fort Worth, Texas this week for the O’Reilly Auto Parts 500. The race can be seen Sunday at 1 p.m. ET on Fox. Be sure to test your knowledge of NASCAR by competing in the Fox Sports Fantasy Auto Racing game.

Everything is bigger in Texas. That will be true with the speeds produced in the O’Reilly Auto Parts 500. Texas Motor Speedway was repaved and reconfigured over the offseason. Turns 1 and 2 were widened and the banking was reduced from 24 degrees to 20 degrees. Buckle up your seatbelt on your recliner this week because the new surface and less down force will produce some fast racing Sunday.

Usually when there is a repave on a NASCAR track Goodyear conducts a test to match the tire compound with the track to help reduce tire wear during the race. That did not happen at Texas Motor Speedway. It is unknown what will happen when the cars show up Friday for practice.

Driver’s statistics at Texas can be thrown out this week. The new track and surface will not race anything like what we have seen in the past at Texas. The closest track in size, shape and banking is Kentucky. That track was resurfaced in 2016 and the Monster Energy NASCAR Cup Series used the same aero-package in the race last year. The drivers who ran well at Kentucky last year should also be fast at Texas.

The race this weekend is 501 miles and 334 laps. Track position will not be important since there will be plenty of time for drivers to make their way to the front Sunday.

The scoring system for the Fox Sports Fantasy Auto Racing game rewards drivers who improve their position in the race more than the drivers who lead the most laps. Fantasy teams must select drivers who start deep in the field in order to score position differential points. It will be hard to win your league without these bonus points.

Brad Keselowski ($10,700) has been on fire since the Daytona 500. Keselowski won at Atlanta and Martinsville and finished in the top five at Las Vegas, Phoenix and California. There is no stopping this team right now. Keselowski has to be the favorite at Texas since the race this week should be similar to what we saw at Kentucky last year. He qualified second and lead 75 laps on his way to the win in the Bluegrass State in 2016. Keselowski will continue to dominate the 2017 season with another trip to Victory Lane Sunday.

Kevin Harvick ($12,800) has run well this season but has been struck by bad luck. His luck could change this week at Texas. Crew chief Rodney Childers will return to the pit box after a one race suspension. The combination of Harvick and Childers has been good on repaved tracks. No driver has led more laps or had a better driver rating than Harvick at the intermediate tracks the last two seasons. The No. 4 car should be up front Sunday.

Kyle Larson ($12,100) has been the driver to beat in every race this season and that should not change Sunday. The new aero-package suites his driving style perfectly. His average finishing position in the last four intermediate track races is 1.75. That is outstanding. Larson may not be in Victory Lane Sunday but the odds suggest he will finish in the top two.

Kyle Busch ($11,800) could easily have two wins on his 2017 resume but he cannot seem to catch a break this season. Busch should have won at Phoenix and he dominated the race last week at Martinsville. Texas has been a good track for Busch. He has two wins and finished in the top five in five consecutive races at the track. Busch should easily finish in the top five again this week.

Martin Truex Jr. ($10,500) has been the best driver on the intermediate tracks since the last race at Texas. He has four wins (Charlotte, Darlington, Chicago and Las Vegas) in the 11 races on 1.5-mile tracks. The No. 78 car has been fast in every race this season. Truex led 150 of the 267 laps on his way to Victory Lane at Las Vegas last month. He could have a similar performance this week.

Dale Earnhardt Jr. ($6,200) looked like he was finally ready to turn his season around last week at Martinsville. He ran inside the top 10 for most of the race but was caught up in a crash and finished 34th. Earnhardt has been at his best at Texas. He has finished the last four races at the track in the top six. Even though Earnhardt has not had any great performances this season his price is still too low in the Fox Sports Fantasy Auto Racing game. This should be the week when Earnhardt scores his first top-10 finish of the season.

Erik Jones ($5,500) is the best value pick in the game this year. He has consistently run in the top 10 but he is nearly the minimum price in the game. Fantasy teams need to continue to use Jones until his price matches his results on the track. Texas is one of the tracks where Jones has experience in the Cup Series. He drove the No. 20 car for Matt Kenseth in the 2015 race at Texas. Jones qualified sixth and finished 12th. He should have similar results Sunday.

Daniel Suarez ($5,000) had a horrible race last week at Martinsville. Luckily for him it is back to normal as the Cup Series returns to racing on the intermediate tracks at Texas. Suarez has been a good value pick this season. He finished seventh at Phoenix and California. Suarez should bounce back this week with another top-15 finish.

Here are my pre-qualifying picks for the O’Reilly Auto Parts 500: