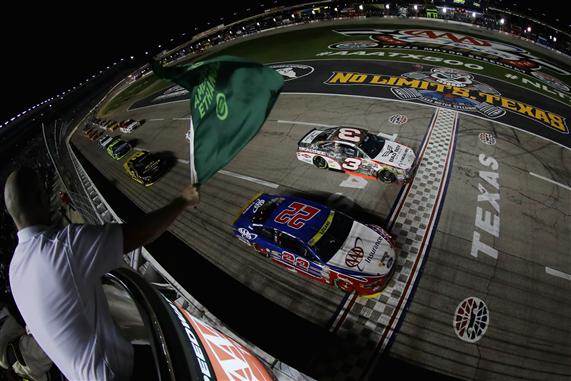 The Monster Energy NASCAR Cup Series travels to Fort Worth, Texas this week for the O’Reilly Auto Parts 500. The race can be seen Sunday at 1 p.m. ET on Fox. Be sure to test your fantasy NASCAR skills in the Yahoo Fantasy Auto Racing game.

A lot has changed since the Monster Energy NASCAR Cup Series raced at Texas in November. The track was repaved and reconfigured over the offseason. Turns 1 and 2 were widened and the banking was reduced from 24 degrees to 20 degrees. The speeds will be fast this week on the new surface with the reduce downforce package.

Driver’s statistics at Texas can be thrown out this week. The new track and surface will not race anything like what we have seen in the past. The closest track in size, shape and banking is Kentucky. That track was resurfaced in 2016 and the Monster Energy NASCAR Cup Series used the same aero-package in the race last year. The drivers who ran well at Kentucky last year should also be fast at Texas.

Here are the top drivers in the Yahoo Fantasy Auto Racing game in the three intermediate track races (Atlanta, Las Vegas and California) in 2017…

There are six drivers I would consider for Group A this week. Brad Keselowski and Martin Truex Jr. have had the most success in 2017. Kevin Harvick dominated the race at Atlanta and he runs well at Texas. Joey Logano and Kyle Busch are past winners at Texas and they have been fast in 2017. Jimmie Johnson still has a hangover from his 2016 championship, but Texas would be a good place for him to come to life. Johnson has six wins in the Lone Star State.

Keselowski is on fire right now and there is no way I am leaving him off my roster. He has finished every race since the Daytona 500 in the top five, including wins at Atlanta and Martinsville. The new shape and banking at Texas is similar to Kentucky and guess who won the race at that track last year? You guessed it… Keselowski. The race at Kentucky was also on a newly paved surface with the same aero-package used in the race Sunday. I missed out on Keselowski’s first two wins of the season. I am not making that mistake again.

The final spot in Group A came down to Kevin Harvick, Joey Logano and Truex Jr. Harvick and Logano have run well this year on intermediate tracks but they have had a hard time getting their care to Victory Lane. Truex has been more consistent and when the No. 78 team brings the right setup to the track they usually dominate the race. I do not want to take a chance of that happening and not having Truex on my team.

Truex has scored the third-most points in Yahoo Fantasy Auto Racing on the intermediate tracks this season. He was also good at Kentucky last year. Truex qualified seventh, led 46 laps and finished 10th because of a problem in the pits at the end of the race. The No. 78 team has been the most consistent driver on the 1.5-mile tracks and he is almost assured a top-five finish Sunday.

I plan to play it safe in Group B this week. Kyle Larson and Chase Elliott are running too well right now to be ignored. I have used these drivers multiple times this season so I am hoping that my other two drivers qualify well and run fast laps in practice. If they struggle, I have two of the best drivers in the sport as a backup plan for Sunday’s race.

Larson does not have as many wins as Brad Keselowski but he has been just as consistent. Larson has finished all three races on the intermediate tracks dating back to the last race at Texas in the top five. That includes three finishes in second-place and a win in California. I plan to have Larson on my team for as many intermediate tracks as possible this season.

When is Elliott going to get to Victory Lane? I would not bet against it happening this weekend. He has been one of the most consistent drivers in the Yahoo Fantasy Auto Racing game. Elliott has finished all three races on the intermediate tracks in the top 10 this season. I am hoping that I do not have to use him this week, but if I do I know he will give me a top-10 finish.

Bowyer does not have good stats at Texas but the track is completely different this season so I am not worried about it. Bowyer has been running well this season and this pick is all about playing the hot hand. Bowyer finished 11th at Atlanta, 10th at Las Vegas and 3rd at California. He is as happy as a kid in a candy store with his new team. Bowyer may not qualify up front but he should be in the top 10 at the end of the race Sunday.

I had a hard time putting McMurray on my team this week because I am still mad at him for NOT CHANGING HIS DAMN TIRE!!!! OK, I feel better now.

Other than the debacle at Martinsville, McMurray has been pretty consistent this season. He finished 10th at Atlanta, 8th at Las Vegas and 6th at California. McMurray is one of the drivers I think will cool down later in the season. I plan to use as many allocations I can with the No. 1 team while they are still running in the top 10.

There are only three good choices in Group C this week. Erik Jones, Daniel Suarez and Ty Dillon are the only drivers with a realistic chance of a top 15 finish at Texas. It does not matter which combination you use, but I would make sure that Erik Jones is one of your choices. He has had Group B talent this year and it would be smart to use him until Suarez and Dillon improve.

Is Erik Jones really a rookie? He sure has not performed like it this season. Texas is one of the only tracks where Jones has experience in the Cup Series. He filled in for Matt Kenseth in the 2015 race at the track. He qualified 6th and finished 12th. Since no driver will have any experience on the newly surfaced track, Jones will benefit from racing in the Xfinity Series race Saturday.

I am sure Suarez is glad the Martinsville race is over. He looked like a fish out of water last week. The good news is that Suarez has been pretty good on the intermediate tracks this season and the car he will be driving dominated this race last year. Suarez is another driver who will be competing in the Xfinity Series race Saturday. The extra track time should pay dividends Sunday.