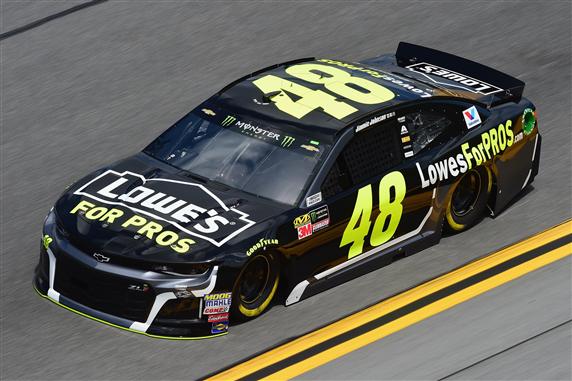 2018 RECAP: 2018 was the worst season for Jimmie Johnson in his Cup Series career. It was the first time the seven-time champion finished outside the top 10 in the point standings. It was also the first time Johnson failed to win a race in a season. He only had 11 finishes in the top 10 (30%) and led an amazingly low 40 laps all year. No one saw this coming. Was his poor season simply a result of the Chevy’s losing speed in the new Camaro ZL1 car or is Johnson finally on the decline. The 2019 season will be an important one for Johnson. (Jimmie Johnson ranked 14th in fantasy points scored in 2018)

2019 Preview: Jimmie Johnson and crew chief Chad Knaus have been rolling along for so long that most people figured they would add more championships and finish their careers together. That will not be the case. After two seasons of bickering on the radio it was time for a change. Chad Knaus will move to the No. 24 car to crew chief for William Byron and Kevin Meendering will move up from the Xfinity Series to crew chief for Johnson. The switch should be a positive one for both teams and could be the spark that Johnson needs to get back on track. Johnson will also have a new sponsor in 2019. After 17 years with LOWES, Johnson will have Ally Financial on the hood this season. That will take some getting used to for sure.

It is hard to predict how the 2019 season will go for Johnson. He could easily get back to his winning ways and add an eighth championship trophy to his collection or he could continue to fade. The good news for fantasy players is that a bad season for Johnson is still inside the top 15. I plan to give him some time before I use him in my fantasy lineups. If he runs well through the west coast races, I will start using him at Martinsville. If he struggles out west, it may be a long time before Johnson makes his way into my fantasy lineups.

Jimmie Johnson has always been considered one of the best drivers on the intermediate tracks. He has 36 wins at these tracks on his resume. That is more than most of the series combined. Johnson was not very good though in 2018. He only had two finishes in the top 10 (Auto Club 9th and Charlotte 5th). Johnson only led 14 laps at these tracks and that is amazing for a driver with his past success. Johnson should bounce back in 2019. I doubt he will visit Victory Lane more than once at the intermediate tracks but he should finish 6-8 of the races in the top 10. I plan to wait and see how Johnson performs at Atlanta, Texas and Kansas before I start using him in my fantasy lineups. (Jimmie Johnson ranked 17th in fantasy points scored on the intermediate tracks in 2018)

Jimmie Johnson has three wins at Daytona and two wins at Talladega on his resume. That should make him one of the best picks in the field, right? Well, maybe not. Johnson has not won on a Superspeedway since 2013. Talladega ranks as his ninth-best track and Daytona is his 22nd-best track. He is a boom or bust pick in the restrictor-plate races. He either wins or crashes out early. That is too much risk to take with my fantasy team. I plan on fading Johnson at the Superspeedways in 2019. (Jimmie Johnson ranked 18th in fantasy points scored on the Superspeedways in 2018)

Jimmie Johnson has been good at every type of track. I could sit here all day long and write about his success at the flat tracks (Phoenix, Richmond, Martinsville and Loudon), but I plan to look at his recent races in order to evaluate him for the 2019 season. Johnson has nine wins at Martinsville but he has not finished in the top 10 at the paper-clip shaped track since 2016. Johnson has four wins at Phoenix but his average finishing position over his last five races in the desert is 23rd. He ran pretty well in his recent races at Richmond and Loudon. Johnson finished his last three races at Richmond in the top eight. He finished three of his last four races at Loudon in the top 10. Johnson should be on all teams at Richmond and Loudon. If he is anywhere near his past form, he will be a good choice at Martinsville too. I plan to fade Johnson at Phoenix.  (Jimmie Johnson ranked 14th in fantasy points scored on the flat tracks in 2018)

Jimmie Johnson is one of the best drivers in the Cup Series on the steep tracks (Bristol, Dover and Darlington). Even though Johnson was in a slump last year, he was able to finish 3rd and 9th at Bristol. Johnson has finished his last five races in Thunder Valley in the top 11. He should be on all fantasy teams at Bristol. Johnson is not scared of the Monster Mile. He has 11 wins at the track and it has been the best track for him in his career. Johnson has finished four of his last five races at Dover in the top 10. Darlington is the only steep track I would fade Johnson at. He has a 25.75 average finishing position at the Track Too Tough to Tame in the last five years. (Jimmie Johnson ranked 12th in fantasy points scored on the steep tracks in 2018)

The only Road Course track (Sonoma, Watkins Glen and Charlotte Roval) I would consider Jimmie Johnson at is the Charlotte Roval. He had a good chance to win the inaugural races at the track and he should be good again this year. I would fade him at Sonoma and Watkins Glen. He has not finished inside the top 10 at Sonoma since 2015 and Watkins Glen ranks as his worst track. (Jimmie Johnson ranked 6th in fantasy points scored on the road courses in 2018)