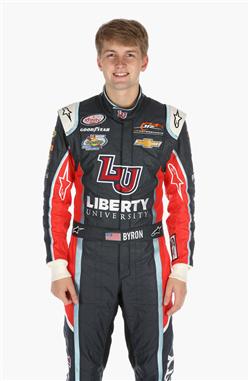 2017 RECAP: I have been following the career of William Byron in the Camping World Truck Series and the Xfinity Series the past two seasons. Few drivers have ever impressed me as much as this young driver. In 2016 he won seven of the 23 races in the truck series. Last year he won four races in the Xfinity Series on his way to the championship. Byron proved that he can excel in the spotlight. He won races at Daytona and Indianapolis last year in the Xfinity Series. Byron has a lot of talent and the 20 year old driver is ready for his MENCS debut.

2018 Preview: Predicting success for a rookie driver is tough, especially when the driver has never competed at the MENCS level. Fantasy players who do not follow the Camping World Truck Series of the Xfinity Series will be shocked at how much talent Byron has behind a wheel. I am not concerned with his lack of experience. Yes, he will have some bad races but he will also have some races where he is competing for the win. Byron will be set up for success at Hendrick Motorsports. The No. 24 car will be fast and crew chief Darien Grubb will provide the experience necessary to make this team run up front.

The No. 24 car always runs well on the Intermediate tracks (1.5-mile and 2-mile ovals). Will William Byron have the same success as Jeff Gordon and Chase Elliott at these tracks? Byron will have a car fast enough to run in the top 10. His lack of experience will hurt his fantasy value but he should have a handful of top-10 finishes at these tracks. Michigan ranked as his second-best track in the Xfinity Series. He was also very good at Homestead, Kansas and Auto Club. I plan to give Byron a month of racing before I start using him on my fantasy team. Even the best young drivers struggle in their first races in the MENCS.

If William Byron won the Daytona 500 I would not be surprised. No stage seems to be too big for Byron. He finished 9th in the February race at Daytona and he came back in June and outraced Joey Logano on his way to Victory Lane in the Xfinity Series. He crashed in his only race at Talladega. Byron will be one of my drivers at Daytona if his price is cheap in Fantasy Live and DraftKings. He will have the car and the talent to finish up front.

William Byron had some success at the flat tracks (Phoenix, Richmond and New Hampshire) in the Xfinity Series. He finished 4th in his first race at Phoenix and came back in November and went to Victory Lane. Byron crashed in his first race at Richmond but came back to finish 7th in the fall race at the track. He qualified 7th and finished 3rd in his only race at Loudon. The Xfinity Series does not compete at Martinsville so this may be the track where he struggles the most. If Byron post fast times in practice at these tracks, do not be afraid to use him in the race.

William Byron had success at two of the three Steep tracks (Bristol, Dover and Darlington) in the Xfinity Series Byron finished in the top six in both races at Dover and in the top five at Darlington. He did not have any success at Bristol. Byron finished 12th in the spring race and 22nd in the fall race in Thunder Valley. I would not hesitate to use Byron at Dover but Darlington and Bristol are going to be tough races for him.

Rookies usually have a hard time in their first trips to the Road Courses (Sonoma and Watkins Glen) in their first season in the MENCS. I expect the same from Byron in 2018. He may run well but I think there are safer picks for your team.