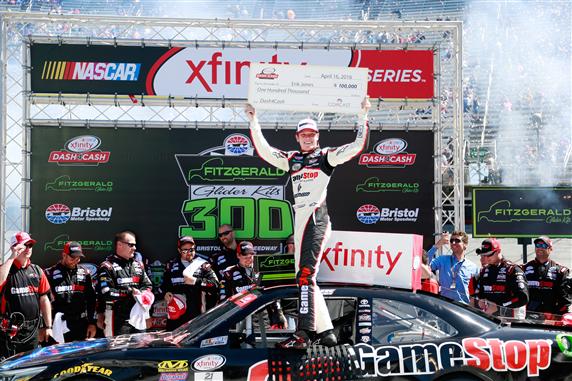 2016 FANTASY LIVE POINTS: Did not compete in full season

2016 YAHOO POINTS: Did not compete in full season

The 2017 NASCAR season is right around the corner. In order to get fantasy teams ready for the new season I decided to recap the 2016 season for my top 30 drivers and preview how I think they will perform this year. Each day I will post two driver previews until my No. 1 fantasy driver is revealed. I will continue my rankings with a driver who may be the most important driver in fantasy racing in 2017, Erik Jones.

2016 RECAP: I was surprised to see that Erik Jones did not compete in any Sprint Cup Series races in 2016. Usually when a team is getting a driver ready for their rookie season in the Cup level they run that driver in a few races the year before. Jones did compete in three races in the Sprint Cup Series in 2015 and he ran well. He finished 40th at Kansas (But ran most of the race in the top 15 before he had car problems), finished 12th at Texas and 19th at Phoenix.

Although Jones did not win the Xfinity Series Championship in 2016, he was one of the best full-time drivers in the series. He won four races (Bristol, Dover, Iowa and Chicago), had 15 finishes in the top five and 20 finishes in the top 20. Jones also led 627 laps during the season. He is more than ready for his rookie season in the Cup Series.

2017 PREVIEW: Jones will move up from the Xfinity Series to make his rookie debut in the Monster Energy NASCAR Cup Series. He will drive the No. 77 car for Furniture Row Racing, become a teammate with Martin Truex Jr. and have the full support of Joe Gibbs Racing. Chris Gayle will serve as the crew chief for the No. 77 car in 2017. Gayle was the crew chief for Joe Gibbs Racing in the Xfinity Series. His drivers were able to win 17 races, so he knows how to get to Victory Lane.

My 18th ranking for Jones is probably a little conservative. Most people think Jones will come into the series is run nearly as well as Chase Elliott in 2016. I do not think he will be that good, but he should be able to put up stats similar to Ryan Blaney (3 top-five finishes, 9 top-10 finishes, 100 laps led).

The fantasy value of Jones in Fantasy Live will depend on what his price is. My guess is that he would be priced around $20. To start the season I would rather have drivers like Austin Dillon, Kasey Kahne or Clint Bowyer if they have a similar price. If Jones starts the season under $15, I suggest selecting him for your team and holding onto him because his price will only go up.

Jones will be the most important driver in the Yahoo Fantasy game. Jones was placed into Group C and he will have similar value to what Chase Elliott had last year. Fantasy players will want to use their allocations wisely. I expect him to run very well at Bristol, Dover and the 1.5-mile tracks. Furniture Row Racing performed well at those tracks in 2016 and they seem to fit Jones’ driving style.