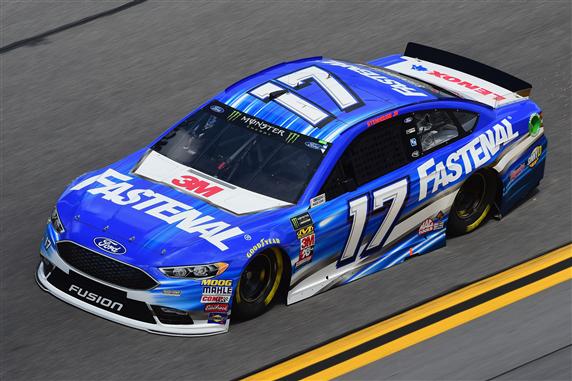 2018 RECAP: The 2018 season was not great for Ricky Stenhouse Jr. Once again he performed well on the Superspeedways and Bristol but struggled everywhere else. That has been the story of his career in the Cup Series and I doubt it will change in 2019. Stenhouse finished five races in the top 10 (Talladega twice, Bristol, Dover and Charlotte). Roush-Fenway Racing brought in Matt Kenseth to help kick start this team. It did not work. Even Kenseth had a hard time finishing in the top 15. Stenhouse has been in the Cup Series for six full seasons and only made the playoffs once. He needs to start showing some improvement soon or he could lose his seat in the No. 17 car. (Ricky Stenhouse Jr. ranked 22nd in fantasy points scored in 2018)

2019 Preview: Ricky Stenhouse Jr. will have a new teammate in 2019. Ryan Newman left Richard Childress Racing to join Roush-Fenway Racing. Matt Kenseth will still be with the team as a consultant. Maybe the two veteran drivers can steer Roush-Fenway Racing in the right direction in 2019. This team has been lacking speed for a long time. Roush-Fenway Racing decided to scrap their Xfinity Series teams and focus on the Cup Series in 2019. This is a “do or die” year for the organization. If they cannot show any improvement with all of the resources they put in to the Cup Series, they may never climb back to the top in the sport.

Everything will be the same with the No. 17 team. Brain Pattie will return as the crew chief and Fastenal, Fifth Third Bank and SunnyD will serve as the primary sponsors. Stenhouse is a free agent after the season so he needs to perform well this year. He will be one of the top picks at Daytona, Talladega and Bristol. I would wait and see how the season is going before I would recommend him at any other tracks.

Ricky Stenhouse Jr. is one of the best fantasy picks at the Superspeedways (Daytona and Talladega). His aggressive driving style at these tracks does not make a lot of friends for Stenhouse but it works. He is the best pick in the field at Talladega. Stenhouse has finished four of his last five races at Talladega in the top five, including a trip to Victory Lane in 2017. He has found more problems at Daytona but he is still a good pick. Stenhouse won the summer race at Daytona in 2017. He must be on all teams in the Driver Group Game when the Cup Series competes at the Superspeedways. (Ricky Stenhouse Jr. ranked 2nd in fantasy points scored on the Superspeedways in 2018)

There are better picks for your fantasy team at the flat tracks (Phoenix, Richmond, Martinsville and Loudon) then Ricky Stenhouse Jr. The only track he had any success at last year was at Richmond. Stenhouse qualified 15th and finished 13th in the fall race at the track. There is some hope for him at Phoenix. In 2017 Stenhouse finished 4th and 8th in the desert but returned in 2018 to finish 23rd and 33rd. His teammate, Ryan Newman is one of the best at flat track drivers. Having Newman in the garage should help Stenhouse improve on these tracks in 2019, but it will still be hard for him t finish in the top 10. (Ricky Stenhouse Jr. ranked 21st in fantasy points scored on the flat tracks in 2018)

Ricky Stenhouse Jr. will have a lot of value at the steep tracks (Bristol, Dover and Darlington) in 2019. Bristol ranks as his second-best track and he is showing a lot of improvement at Dover as well. Stenhouse has finished half of his races at Bristol in the top 10. He has two runner-up finishes at the track, so if he is going to win a race on a non-plate track, it will probably be in Thunder Valley. His success at Bristol has not always translated into success at Dover. Last year he finally figured out the Monster Mile. Stenhouse finished 8th and 15th in the two races in Delaware. He should continue to run well at Dover in 2019. Darlington is more of a down-force track and Roush-Fenway Racing has struggled to compete at these tracks. Stenhouse did finish 12th at the Lady in Black, but his average finishing position is 22.5 in his career at Darlington. (Ricky Stenhouse Jr.ranked 15th in fantasy points scored on the steep tracks in 2018)

Ricky Stenhouse Jr. is not the driver you want on your fantasy team at the Road Courses (Sonoma, Watkins Glen and Charlotte Roval). Sonoma and the Charlotte Roval rank as his two worst tracks. He has a 26.7 average finishing position at Sonoma and he finished 37th in his first race at the Roval. Stenhouse had his best ever finish at Watkins Glen in 2018. He qualified 23rd and finished 16th. I doubt he will finish inside the top 15 at the Glen this year. (Ricky Stenhouse Jr. ranked 25th in fantasy points scored on the road courses in 2018)