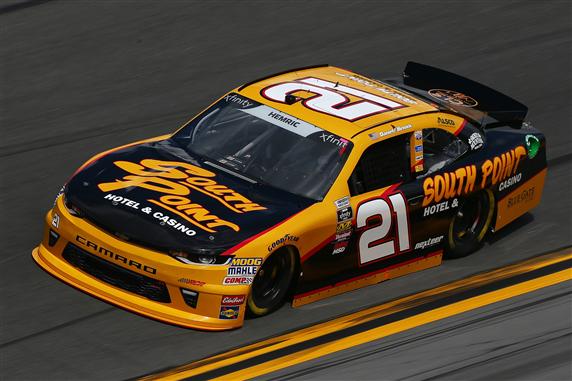 2019 Preview: Daniel Hemric will be replacing Ryan Newman at Richard Childress Racing. The team will switch from the No. 31 car to the No. 8 in 2019. Luke Lambert served as the crew chief for Ryan Newman for the past five years and now he will be calling the shots for Hemric. Having a veteran crew chief on top of the pit box should help make Hemric’s transition from the Xfinity Series to the MENCS a smooth one.

Last year I was talking to a friend from PRN Radio. I asked him if he thought Daniel Hemric was ready for the Cup Series. He told me that Hemric reminded him a lot of Jimmie Johnson. Johnson only ran two full seasons in the Xfinity Series and he only won one race. Many wondered if he was ready for the Cup Series. We all know how that story played out. If my friend is right, and Hemric is half as good as Johnson… Richard Childress will have one of the best young drivers behind the wheel of their cars.

Daniel Hemric is a smooth, patient driver. That is what makes him so good on the intermediate tracks. Hemric had a 7.1 average finishing position on the intermediate tracks last season in the Xfinity Series. His average would have been 4.75 if you take out the race he crashed in at Las Vegas. Hemric could be a good sleeper pick in Daily Fantasy Sports (DFS) depending on his price. I would wait until Kansas in the season long games before I gave him a spot in my lineups. If Hemric performs well at Atlanta, Las Vegas and Texas… He will be a good pick at Kansas and Charlotte.

Daniel Hemric has only competed in four races in the Xfinity Series at Daytona and two races at Talladeag. His average finishing position at Daytona is 24.25 and his average finishing position at Talladega is 30.5. There are better choices for your fantasy team at these tracks, but if he qualifies outside the top 25 he will be worth a gamble in DFS because of his ability to score place differential points.

Damiel Hemric does not have much value at the flat tracks (Phoenix, Richmond, Martinsville and Loudon). Phoenix, Richmond and Loudon rank as three of his worst tracks in the Xfinity Series. He has never raced a Cup Series car or Xfinity Series car at Martinsville so we should expect up to struggle at the paper-clip shaped track. Hemric ran the MENCS race at Richmond last year. He qualified 32nd and finished 22nd. He should be slightly better than that in 2019, but I think there are better choices for your fantasy team.

Daniel Hemric will have some value at the steep tracks (Bristol, Dover and Darlington) in 2019. These three tracks rank as three of his best. Hamric should be on all teams in the Driver Group Game at Bristol. He finished three of his four races in Thunder Valley in the top seven. His only finish outside the top 10 was in the fall race last year when he was involved in a late race crash. Hemric has also finished his last three Xfinity Series Races at Dover in the top seven. He is worth a spot in your fantasy lineup at the Monster Mile. Hemric is an old-school driver so his smooth driving style fits Darlington perfectly. He will be worth a spot on your team in DFS if his price is right.

Daniel Hemric may have some value at the Charlotte Roval but I would avoid him at Sonoma and Watkins Glen. Hemric finished 10th in the Xfinity Series race at the Cahrlotte Roval and 23rd in the MENCS race. I expect him to finish somewhere near the 20th spot at this track in 2019. Hemric has never competed in an Xfinity Series or MENCS race at Sonoma. This Road Course in California is tough to figure out so he will likely struggle at that track. Watkins Glen ranks as the worst track for Hemric. He has two starts in the Xfinity Series at The Glen and he has never finished inside the top 15.