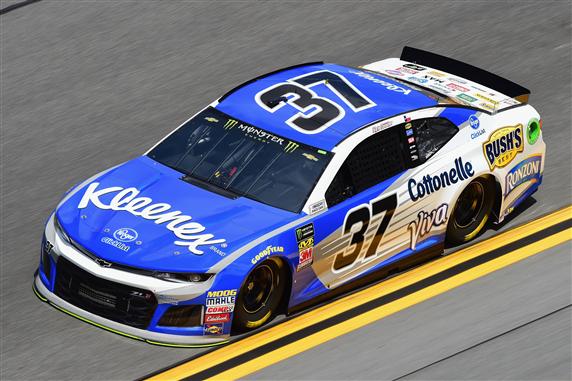 2018 RECAP: Chris Buescher started out the 2018 season with a 5th-place finish in the Daytona 500. He continued to be one of the best value picks in Fantasy NASCAR all season. The 2015 Xfinity Series Champion scored 17 top-20 finishes. That is not bad for a driver who was priced outside the top 20 in most salary cap games. His best track was Daytona were he scored a pair of top-five finishes. He was also a good pick at the intermediate tracks. Buescher finished 15th in both races at Las Vegas, 15th at Texas, 13th at Darlington and 16th at Kansas. Hopefully the No. 37 team can build on their strong run in 2018 and turn it into success in 2019. (Chris Buescher ranked 24th in fantasy points scored in 2018)

2019 Preview: JTG Daugherty Racing decided to end their alliance with Richard Childress Racing and start a new alliance with Hendrick Motorsports at the end of the 2018 season. The team wanted to get a head start on the 2019 season so AJ Allmendinger drove Hendrick Motorsports cars in the final three races. The switch from RCR to HMS should translate into more success for Chris Buescher on the track. Trent Owens served as the crew chief for this team in the first 27 races last year. He switched to Allmendinger’s car for the final nine races. Owens will be back on top the pit back for the No. 37 team this season.

Chris Buescher will have more value in salary cap games than he will have in the Driver Group Game. He will likely be placed in Group B and the competition is tough in that group. His price should be cheap enough in Daily Fantasy Sports (DFS) to make him a good pick at all Superspeedways and intermediate tracks. He is also a good pick at Indianapolis and Pocono (He won at the Tricky Triangle in 2016).

Chris Buescher was decent at the intermediate tracks last year. He had an average starting position of 21.8 and an average finishing position of 18.6. That is pretty good value in DFS and other salary cap games because of his cheap price, ability to score place differential points and finish inside the top 20. His best tracks are Las Vegas and Kansas. Buescher finished both races at Las Vegas in the top 15 last year. He finished 16th at Kansas after his 6th-place finish in the Heartland in 2018. He should be considered for your fantasy team at both of these tracks in 2019. (Chris Buescher ranked 23rd in fantasy points scored on the intermediate tracks in 2018)

Chris Buescher was one of the best fantasy picks at the Superspeedways (Daytona and Talladega). He finished fifth at both races at Daytona and 11th and 27th in the two races at Talladega. If Buescher is going to find his way to Victory Lane in 2019, it will be at one of these tracks. He is a great allocation saver for the Driver Group Game at Daytona and Talladega and he will have value in DFS depending on where he qualifies in the races. Make sure to keep Buescher’s name on your list of drivers when constructing your lineups at the Superspeedway Tracks in 2019. (Chris Buescher ranked 26th in fantasy points scored on the Superspeedways in 2018)

The flat tracks (Phoenix, Martinsville, Richmond and Loudon) were the worst tracks for Buescher in 2018. He finished the first five races at these tracks outside the top 20. He did show improvement at the end of the season with a 13th-place finish at Martinsville and an 18th-place finish at Phoenix. Hendrick Motorsports always performs well at the flat tracks so the change to HMS cars should help Buescher improver at these tracks in 2019. I doubt he will finish any of the races inside the top 10, but he will have a good chance to run inside the top 15 at Phoenix and Martinsville again. (Chris Buescher ranked 27th in fantasy points scored on the flat tracks in 2018)

Chris Buescher was not a good value pick at the steep tracks (Bristol, Dover and Darlington) in 2018. His average finishing position in the two races at Bristol was 27.5 and his average finishing position in the two races at Dover was 22.5. The good news is that Darlington ranks as the No. 1 track for Buescher. He has three starts in the MENCS at the Track Too Tough to Tame and he has never finished worse than 17th. Last year Buescher qualified 19th and finished 13th at Darlington. He would be a great pick for your One & Done team at Darlington. (Chris Buescher ranked 24th in fantasy points scored on the steep tracks in 2018)

Chris Buescher is not the first name that comes to people’s minds when they think of good Road Course drivers, but it should be. Buescher spent a lot of time working with AJ Allmendinger to help improve his Road Course skills and it paid off. Buescher finished 12th at Sonoma, 17th at the Charlotte Roval and 20th at Watkins Glen. Buescher will be a good allocation saver in the Driver Group Game at these tracks and he is usually a good value pick in DFS as well. Do not forget about JTG Daugherty Racing at the Road Course just because Allmendinger is gone. They should still run well with Buescher behind the wheel. (Chris Buescher ranked 18th in fantasy points scored on the road courses in 2018)