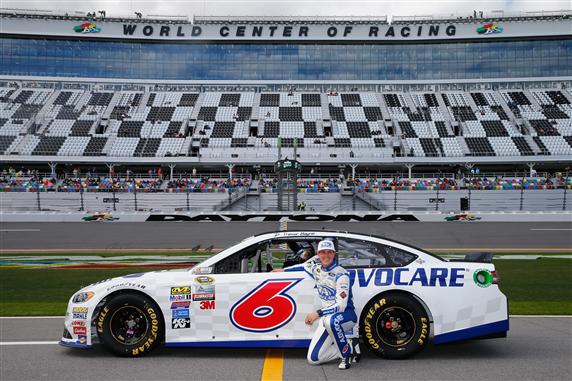 2017 RECAP: Trevor Bayne got off to a nice start in 2017 but lost a lot of him momentum once the Toyotas figured out their new chassis. Bayne finished eight of the first 11 races in the top 13. He ranked 22nd in fantasy value over the season. It was the second consecutive season where Bayne ranked 22nd in fantasy value. He performed well at his home track in Bristol and Bayne once again ran well at Daytona. Fantasy players got about what they expected from Bayne in 2017.

2018 Preview: There will not be any changes for the No. 6 team in 2018. Matt Puccia will once again be calling the shots on top the pit box and the team will drive the same Roush-Yates Ford they competed with in 2017.

Roush Fenway Racing is not the same powerhouse team they were in the past. Bayne will have some races where he finishes in the top 10 but most of the races will be run between the 15th and 20th positions. Fantasy teams need to know what tracks are the best for Bayne and use him in these races (Bristol, Daytona, Michigan and Atlanta). I would fade him at the rest of the tracks unless the team makes significant improvements over the offseason.

Trevor Bayne was OK on the Intermediate tracks (1.5-mile and 2-mile ovals) last year. He ranked 22nd in fantasy value and had a 17.7 average finishing position in these races. It would have been a couple of spots higher if he did not have an early DNF at Kentucky. Bayne has some fantasy value at these tracks because he usually qualifies outside the top 20 and finished 4-6 spots ahead of where he starts the race. Michigan and Atlanta rank as two of his best tracks. Bayne should be considered for your fantasy team at these two tracks.

Trevor Bayne only has one win in his career and it came in the 2011 Daytona 500. Bayne continues to run well at the Superspeedways (Daytona and Talladega). Bayne ranked 13th in fantasy value at these two tracks last year and he should be just as good in 2018. Bayne is one of the only drivers to complete every lap at Daytona in the last six races. Staying out of trouble is the name of the game on the Superspeedways and few do it as well as Bayne. The No. 6 car should be at the top of your list when the MENCS competes at Daytona and he should also be considered at Talladega too.

Trevor Bayne struggled on three of the four flat tracks (Phoenix, Richmond, Martinsville and Loudon) last year. The only track he had success at was Martinsville. Bayne finished 13th in the spring race and backed it up with a 6th-place finish in the fall. Bayne ranked 24th in fantasy value at these tracks. I would consider him for your fantasy team at Martinsville but I would fade him at the other tracks.

Trevor Bayne is at his best at Bristol. He is a Tennessee native and the race in Thunder Valley ranks as his best track. Bayne has an average finishing position of 7th in his last five races at the track. It is surprising that his success at Bristol has not translated into top-10 finishes at Dover. The Monster Mile ranks as his 6th worst track. I would also fade him at Darlington. Bayne has never finished better then 35th in his three races at the Track Too Tough To Tame.