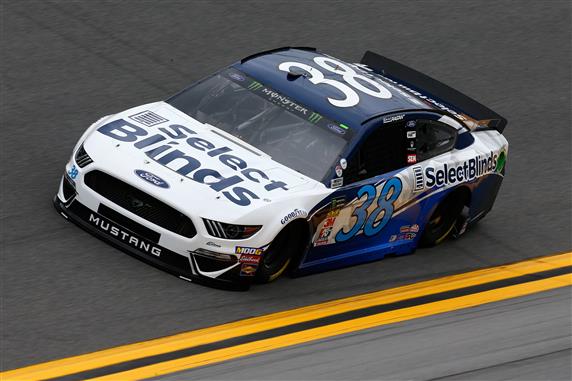 2019 RECAP: John Hunter Nemechek drove full time in the Xfinity Series for GMS Racing last year. The team expected a lot from the young driver since he finished 11 of his 16 races for Chip Ganassi Racing in the Xfinity Series in 2018. He also won the race at Kansas in the No. 42 car. Nemechek had a good season for GMS (finished 19 of the 33 races in the top 10) but he was unable to find Victory Lane for his new team.

Nemechek really performed well when he took over the seat in the No. 36 car for the injured Matt Tifft. Nemechek said his father told him to focus on completing all of the laps and do not worry about trying to win races. That is what Nemechek did. His finished 21st at Texas in his first ever Cup race and 23rd at Homestead. If he focuses on finishing each race on the lead lap, Nemechek could have some serious value in DFS and be worth consideration in our season-long leagues (Fantasy Live and Driver Group Game) in the second-half of the season. I think he will be better once he gets more experience.

2020 Preview: John H. Nemechek will drive the No. 38 car for Front Row Motorsports. This is the car that David Ragan drove in 2019. Front Row Motorsports will scale back to two teams in 2020. That should help them focus on their two cars and get back to where they were in 2018. The team will have an alliance with Roush-Fenway Racing once again. The chances of Nemecheck winning the Rookie of the Year award are slim but he is a driver we need to keep our eye on. The No. 38 car likely will not have the speed to qualify up front but Nemechek has the talent to score a lot of place differential points. I plan to use him a lot in DFS in 2020.

John H. Nemechek has been at his best on the intermediate tracks in the Xfinity and Truck Series. His best tracks are: 1. Kansas, 2. Homestead, 3. Las Vegas and 4. Texas. Nemechek has nine races on his Xfinity Series resume at these tracks and he has never finished outside the top 10. So how will that success translate into the Cup Series? Nemecheck finished 21st at Texas and 23rd at Homestead in the Cup Series at the end of the 2019 season. He should be a consistent top-25 finisher. His value will be better in DFS but I would still consider him for an allocation saver in the Driver Group Game.

Joe Nemechek was always good at the Superspeedways in his prime and the apple does not fall far from the tree. John H. Nemecheck had some top six runs at the Superspeedways in the Truck Series and he never finished outside the top seven at Talladega in an Xfinity Series car. Nemechek finished 8th and 22nd in his two Xfinity Series races at Daytona. Front Row Motorsports has a history of running well at these tracks. Nemechek is a smart, young driver. If he follows his teammate (Michael McDowell) around the track, he should finish well. I will wait to see how he runs in the Daytona 500 before I use him at Talladega in April.

John H. Nemechek is a driver we need to watch at the Flat Tracks. He ran really well at Phoenix and Iowa in the Xfinity Series. He finished 27th in his only Cup Series start at Phoenix last November, but at least he has some experience in the top series at the track. Wait until the second-half of the season before using Nemechek in your season-long lineups. He will be worth a spot in your DFS lineups to save some salary if he qualifies poorly.

The short, steep tracks typically are tough for rookies. If John H. Nemechek is going to have any success at these tracks it will be at Bristol. The track in Thunder Valley ranks as his sixth-best track in the Xfinity Series. Nemechek finished 3rd and 5th in his two races at the track in the Xfinity Series last year. Nemechek finished three of his four races at Dover in the top 10 so he could have some value at the Monster Mile too. He was not very good at Darlington. I will wait to see how Nemechek runs in the first races at Bristol and Dover before I decide to use him in the fall races.

John H. Nemehek will likely struggle on the Road Courses in 2020. Unless your name is Jeff Gordon or Tony Stewart, rookies usually cause more problems at these tracks than the more experienced drivers. Nemechek has never driven a Cup or Xfinity Series car at Sonoma so his trip to wine country will be a learning experience for him. He has one start in the Xfinity Series at Watkins Glen. Nemechek started 20th and finished 12th. His best Road Course track is the Charlotte Roval. Nemechek qualified 14th and finished 7th in his only start at the track in the Xfinity Series. I rather have his teammate (Michael McDowell) at the Road Courses in 2020.