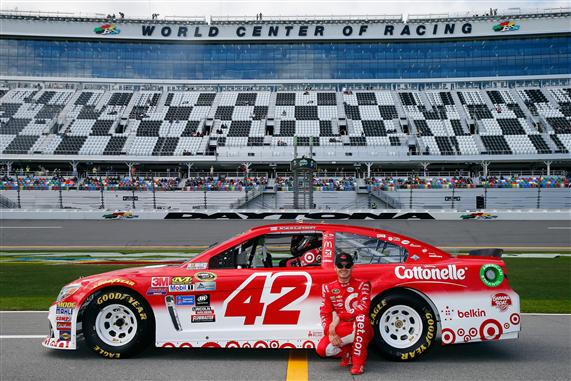 The 2017 NASCAR season is right around the corner. In order to get fantasy teams ready for the new season I decided to recap the 2016 season for my top 30 drivers and preview how I think they will perform this year. Each day I will post two driver previews until my No. 1 fantasy driver is revealed. I will continue my rankings with Kyle Larson.

2016 RECAP: Kyle Larson bounced back in 2016 after a sophomore slump in 2015. Larson won his first race in the Sprint Cup Series at Michigan and came close to winning at Homestead. Larson had 10 finishes in the top five (8 more than the previous year) and 15 finishes in the top 10 (5 more than the previous season). If he can continue to improve at this rate he will be racing for the championship at his best track (Homestead).

Larson was a good pick in Group B of Yahoo Fantasy last year. He is a good pick at the tracks where most fantasy players have a hard time deciding on their drivers. Larson has been very good at Indianapolis (2 straight finishes in the top-10), Darlington (3 straight finishes in the top 10) and Pocono (Average finishing position of 8.83 in his six career races). Larson was also one of the best picks at Michigan (finished 2nd and 3rd) and Richmond (finished 2nd).

The Chevys finished the season strong last year and I expect them to be the top manufacturer entering the 2017 season.

2017 PREVIEW: I have Larson ranked 8th in my standings but I would not be surprised if he finished a lot higher in 2017. Everyone knew that Larson had a lot of talent; it was just a matter of him figuring out how hard to push his car. He was always a driver who would overdrive his car. After his win at Michigan it seemed to have clicked for Larson. He was able to dominate a few tracks (Darlington and Homestead). I expect Larson to take another step forward this season and become one of the elite drivers in the sport.

Larson could have easily been placed into Group A of Yahoo Fantasy because his statistics in 2016 were just as good as some of the drivers in that group. I think they made the right call by placing Larson in Group B. He will be one of the top four picks in the group. Fantasy teams will want to make sure they save their allocations with Larson for Michigan, Dover, Indianapolis, Chicago, Darlington and Homestead.

Larson should see a price increase in Fantasy Live. He was priced around $24 for most of the 2016 season. I would expect him to start the season at about $26 in 2017. Larson will be a good second or third driver for your Fantasy Live team depending on the track. He scores a lot of points for position differential but he needs to lead more laps to become one of the premier drivers in Fantasy Live.